Second-tier causes include alcohol, extramarital affairs and anger, figures released by the Ministry of Justice and Courts Administration (M.J.C.A.) on Wednesday revealed.

Criminal domestic violence nature cases are dealt with by the Family Violence Court established under the Family Safety Act of 2013. The court commenced operations in August 2013.

(The Family Court, established in 2014 is a different entity with different jurisdiction.)

The Family Violence Court recorded 353 cases of domestic violence in 2019 alone. Some 176 of those cases were caused by anger, jealousy, relationship issues and stress.

Extramarital affairs, alcohol and anger, in combination, contributed to 108 cases of D.V. Financial issues led to 42 cases and 27 cases were caused by a combination of land disputes and anger.

In the same three-year period, there were 343 charges relating to the use of insulting words. And being armed with a dangerous weapon accounted for 208 criminal charges.

The use of threatening words were involved in 184 charges, while assault causing injury totalled 142 charges between 2017 and 2019. 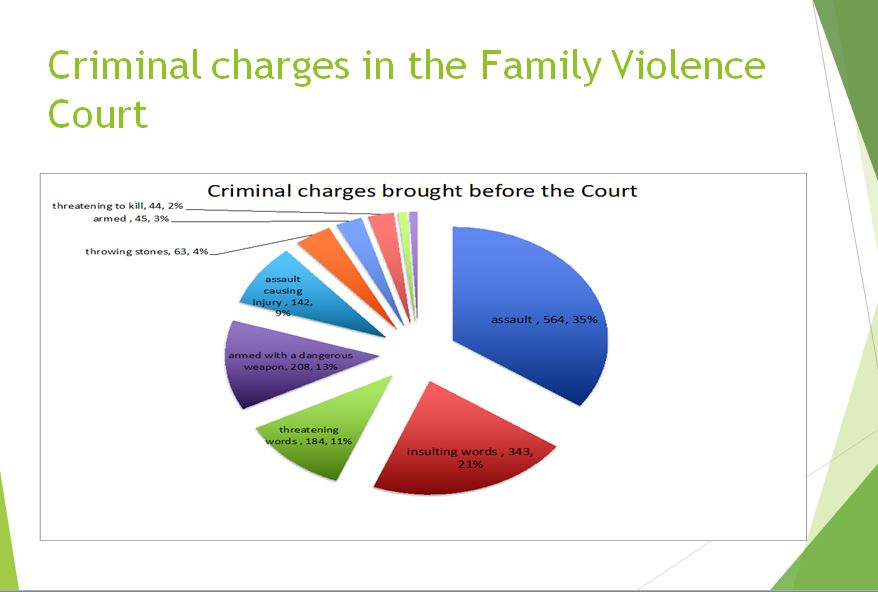 Sexual abuse, cases of indecent assault and sexual violation were also prevalent. Such cases are heard in the Supreme Court.

An M.J.C.A. official shared the figures when she spoke to Family Safety Committees from three villages: Lotopue, Lalovi-Mulifanua and Vaiee on Wednesday at the Tanoa Tusitala Hotel Conference Room.

The Wednesday event was hosted by The Office of the Ombudsman, also called the National Human Rights Institute (N.H.R.I.) at which the villages launched three-year work plans to prevent violence at the village level.

The N.H.R.I. has partnered with a number of organisations on the pilot project including: the Pacific Partnership to End Violence Against Women and Girls, funded primarily by the European Union and the Governments of Australia and New Zealand and U.N. Women.

The launch was held to commemorate the 16 Days of Activism Against Gender-based Violence campaign. The campaign runs every year from 25 November, the International Day for the Elimination of Violence against Women to 10 December, which is Human Rights Day.