Speaking on TV3, Tuilaepa also questioned how the newspaper got the information.

“The publication is wrong," Tuilaepa said. "[I’m] not sure where they got the Cabinet papers, which a decision prompted following a request by three people."

The article the Prime Minister made reference to in his criticism was published on 21 November 2020. It was based on a submission from the Ministry of the Prime Minister and Cabinet for a “one-off” payout to six Government officials who had resigned to contest the election.

The article was based on Prime Minister Tuilaepa's request to Cabinet for the former officials’ contracts to be paid from 23 October until the final session of Parliament, according to Cabinet papers that the Samoa Observer had obtained.

The Prime Minister's submission to Cabinet was attached with legal advice from the Attorney General, Savalenoa Mareva Betham-Annadale. The Attorney General said there was no provision for such payouts under the law but recommended that the payouts be made as a matter of “public interest”.

“In consideration of the public interest and principle of fairness, the Government may wish to consider approving the [.... payments] for the parties on the basis of a special one-off case,” said Savalenoa.

All six officials resigned from their positions to contest the forthcoming election under the banner of the Prime Minister’s Human Rights Protection Party.

However, speaking on his weekly programme on Wednesday, Tuilaepa said that Samoa Observer and whoever gave them this document “thought this was corrupt practices but they do not understand.”

"As I explained earlier, these types of decisions, especially when there are no governing policies, it is not easy to come to an amicable resolution. 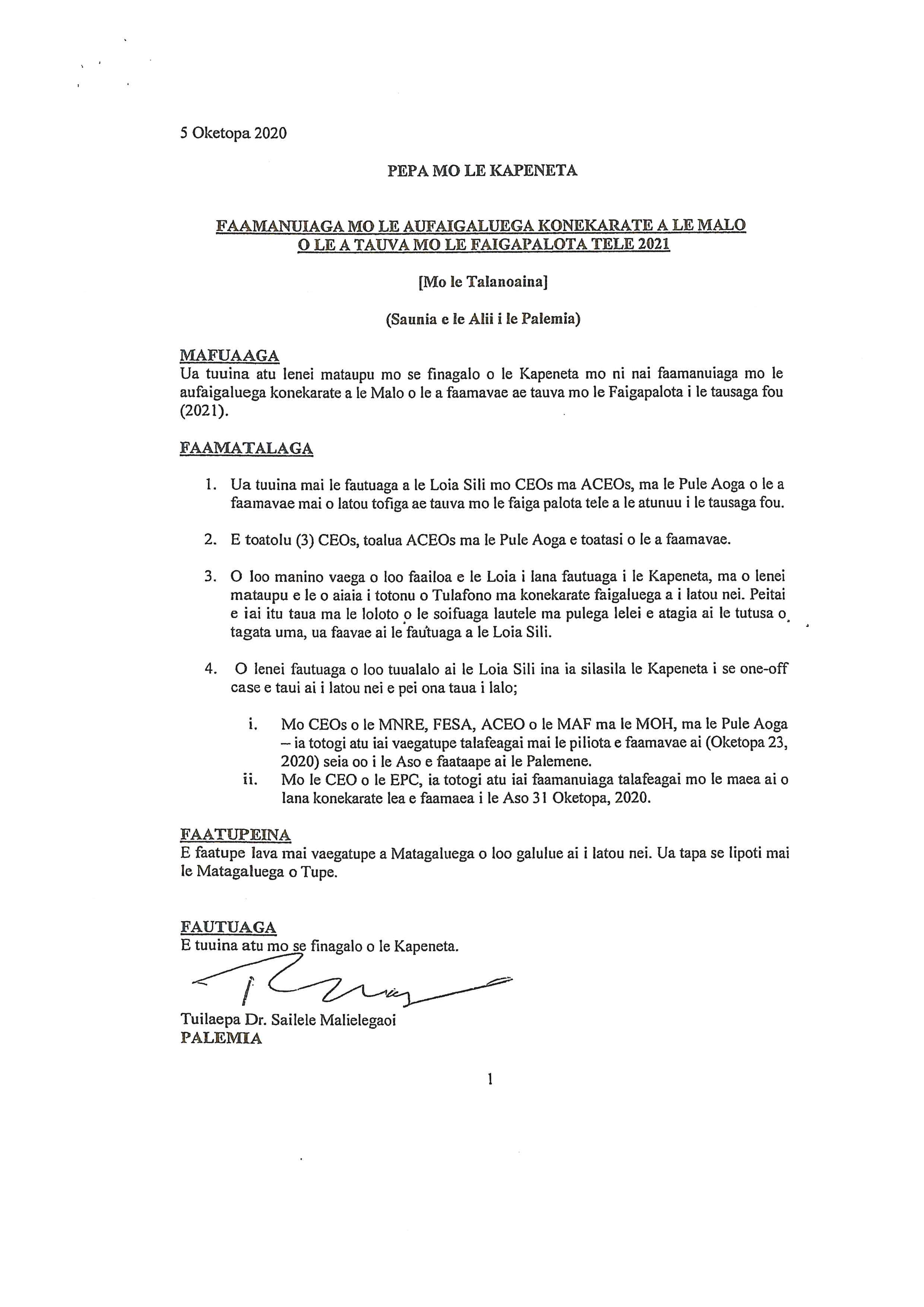 “And I submitted it to Cabinet for review and then sought for a report to include all the public servants that have resigned [to run for public office] and we have now received the report on the candidates running under the banner of Human Rights Protection Party; Fa’atuatua ile Atua Samoa ua Tasi; and Tautua Party.

“The A.G.’s legal view was requested along with a recommendation and in return, there is no [contractual] policy regarding the [request]. Also [Cabinet] requested for a review from the Public Service Commission and they said there is no law allowing this type of [payout].”

The Prime Minister then revealed that the Cabinet decided against the request during its meeting on Wednesday.

“And this is because there is no governing policy and law to allow such practice. But if there are plans in the future, then it can be reviewed in that time.

“But for the time being it is not right to grant the request when it is near the general election. And it’s likely the Government will be accused of being unfair.”

He reiterated that it is not right to grant such a request for only certain people and not all the public servants resigned to run for public office.

Tuilaepa then said the Samoa Observer made it seem like “the Prime Minister made a request for a financial payout for the three [H.R.P.P.] candidates.”

“This is what you call jumping the gun and poking into businesses they are not involved in. And this is a result of stealing documents which [Cabinet] have not ruled on,” said the Prime Minister.

He also questioned why the newspaper did not seek comments from the responsible Ministry’s  Chief Executive Officer, Agafili Shem Leo.

“They should have asked for a comment from the C.E.O. of the M.P.M.C. or send over questions, but they went ahead with the article.

“For a newspaper that continues to make mistakes, then people will think the Samoa Observer only publishes false articles and defaming of the H.R.P.P..”

However, this newspaper did send questions to Agafili, who responded in an email to the Samoa Observer. Agafili's comments were printed in the story the Prime Minister had criticised.

Agafili's response is reprinted verbatim below:

“Joyetta, there are government HR policies that guide all government contractual officers' entitlements.

“These are also clearly spelled out in their contracts whether its under the Public Service Commission or with a Government Corporation.

“For those planning to, or have resigned to run for elections, there are government policies that apply. Cabinet makes decisions in view of the laws and existing policies. These policies reflect the whole of government, and are applied consistently for all public servants.”