Diabetes is the leading cause of kidney failure in Samoa, a landmark study authored by Samoan Dr. Malama Tafuna’i has found.

Published in the Lancet Western Pacific - the report, “Kidney Failure in Samoa” - is the first to document data on kidney treatments and the causes of kidney disease, according to the International Society of Nephrology (I.S.N.).

“There is limited literature on kidney disease in the Pacific Region, despite it being recognised as a leading cause of death in some Pacific Island nations,” the report reads.

Her study calls for urgent action for more preventative measures on kidney disease and kidney failure.

The impact of western lifestyle influence is profoundly influencing the health of the Samoan population, the report notes.

According to World Health Organisation surveys, there has been a dramatic increase in the burden of non-communicable diseases such as obesity, diabetes, and high blood pressure.

Combined, they account for 80 per cent of all deaths in Samoa.

But chronic kidney disease is the country's fourth-largest cause of death; but the report found rates of kidney disease were "almost certainly" understated due to a lack of access to data. 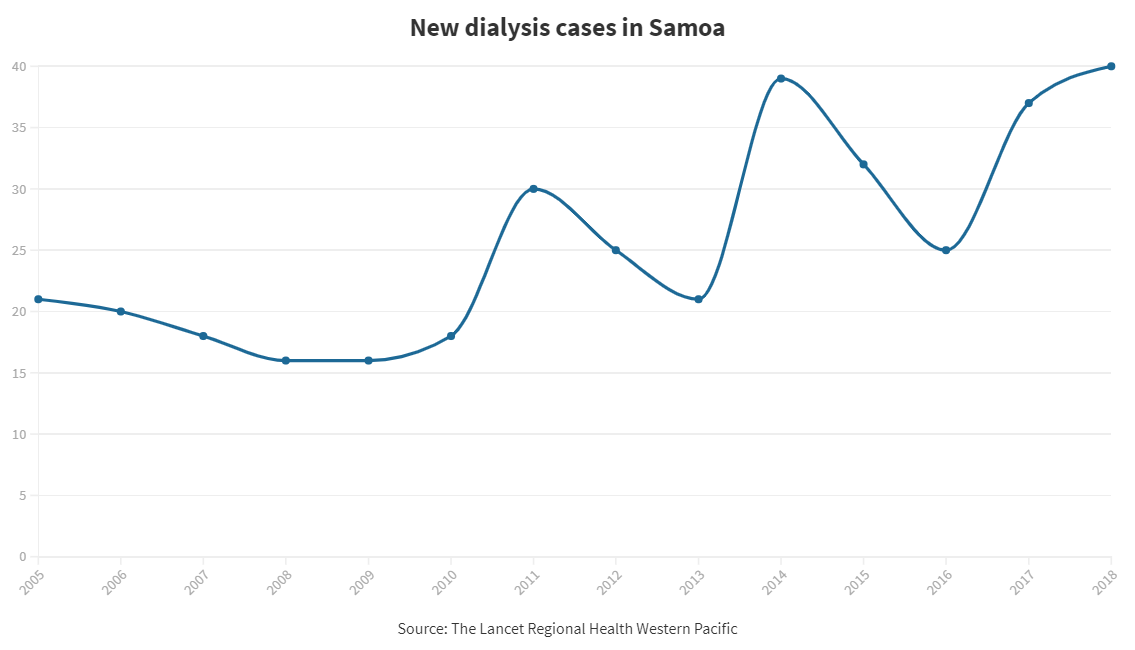 The study examined registry data from the National Kidney Foundation of Samoa (N.K.F.S.) to estimate the incidence and prevalence rates of kidney failure from the rates of haemodialysis in Samoa and examine the demographics underlying the disease.

According to the data from the N.K.F.S., 393 patients have received long term haemodialysis, more commonly called dialysis, at the N.K.F.S. since its inception in 2005 until August 2019.

The report found that 43 percent of the haemodialysis population were women and the mean age of people dialysed was 54.9 years.

Diabetic nephropathy (69.4 per cent) was found to be the leading cause of kidney failure.

“This is the first paper to report [on] the epidemiology of haemodialysis patients in Samoa and reveals an urgent need for further studies on the extent of chronic kidney disease, and kidney failure, in Samoa to develop country-specific prevention strategies to mitigate this growing burden and optimise care for kidney failure patients in Samoa,” the report states.

The report notes that the USD$3.70 fee for dialysis treatment limits the capacity for many kidney disease sufferers to receive treatment.
"Samoa is facing an epidemic of kidney failure, similar to most other Pacific Islands," the report concludes.

"The National Kidney Foundation of Samoa provides subsidised haemodialysis, and is under considerable pressure with rapidly increasing numbers of patients requiring dialysis almost certainly linked to the high incidence of other non-communicable diseases such as diabetes, hypertension and cardiovascular disease.

"This in turn is associated with a rising health economic burden both to the individuals and their families as well as the community. In addition to providing dialysis facilities, this study provides support for the N.K.F.S. to expand its vision to early detection and prevention strategies."

Ultimately the study finds that kidney disease is placing an immense economic and health cost on Samoa.

I.S.N. said the N.K.F.S. provides the only government-funded dialysis service in the Pacific.

In early 2020, with the aid of Dr. David Voss, an International Society of Nephrology Sister Renal Centers (S.R.C.) partnership was established between N.K.F.S. and Middlemore Hospital in Auckland, New Zealand.

Dr. Tafuna’i, from the emerging centre, was the medical officer overseeing the dialysis service before taking up a research opportunity funded by the Health Research Council of New Zealand.

“The research will help highlight health issues in the Pacific and the need for increased I.S.N. and [the Australian and New Zealand Society of Nephrology] support in the region," the I.S.N. said in a press release.