The life of a loving husband, father, grandfather, chief, and patriarch of the Tuilagi family from Safotulafai, in Savai'i, Namulau'ulu Lauaki Su Palakoki Tuilagi Vavae Leo II, was celebrated on Friday.

Families, friends, associates, and his fellow church and village members gathered at the Catholic Church at Fusi Safotulafai, to pay tribute and farewell the 75-year-old who died on 8 November, 2020.

Among the mourners were the Prime Minister, Tuilaepa Dr. Sa'ilele Malielegaoi, Cabinet Ministers and Parliamentarians who traveled to the big island to pay their respect to the former Member of Parliament and Speaker of the Legislative Assembly.

Namulau'ulu was remembered for his championing and fighting spirit; his directness; his sense of compassion; and being a proud and loving father.

Prime Minister Tuilaepa spoke on behalf of the government of Samoa to thank Namulau'ulu for not only his time in Parliament but for nurturing strong and courageous sons who represented Samoa internationally through the game of rugby and for putting Samoa on the map.

"Tuilagi Vavae became a Member of Parliament for Fa'asaleleaga No.2. in 1988-1991, in the tenth Parliamentary term for the Parliament of Samoa," Tuilaepa said.

"Tuilagi contested under the flag of the Human Rights Protection Party (H.R.P.P) and was chosen as the Deputy Speaker of the Legislative Assembly.

"He also held other positions in Parliamentary Committees during his time in office.

"Tuilagi became an M.P. under the leadership of the late Tofilau Eti Alesana, who was the Prime Minister of Samoa at that time.

"It wasn't an easy time to be in Parliament because of the conflicting views among the members and political parties at the time.

"Tuilagi was one of the courageous warriors who strived victoriously for the benefits of the people and the H.R.P.P.

"The late Tofilau Eti Alesana relied on his oratory skills and his to'oto'o (wooden staff) to deliver a message or speech during the many meetings we had for our political party. 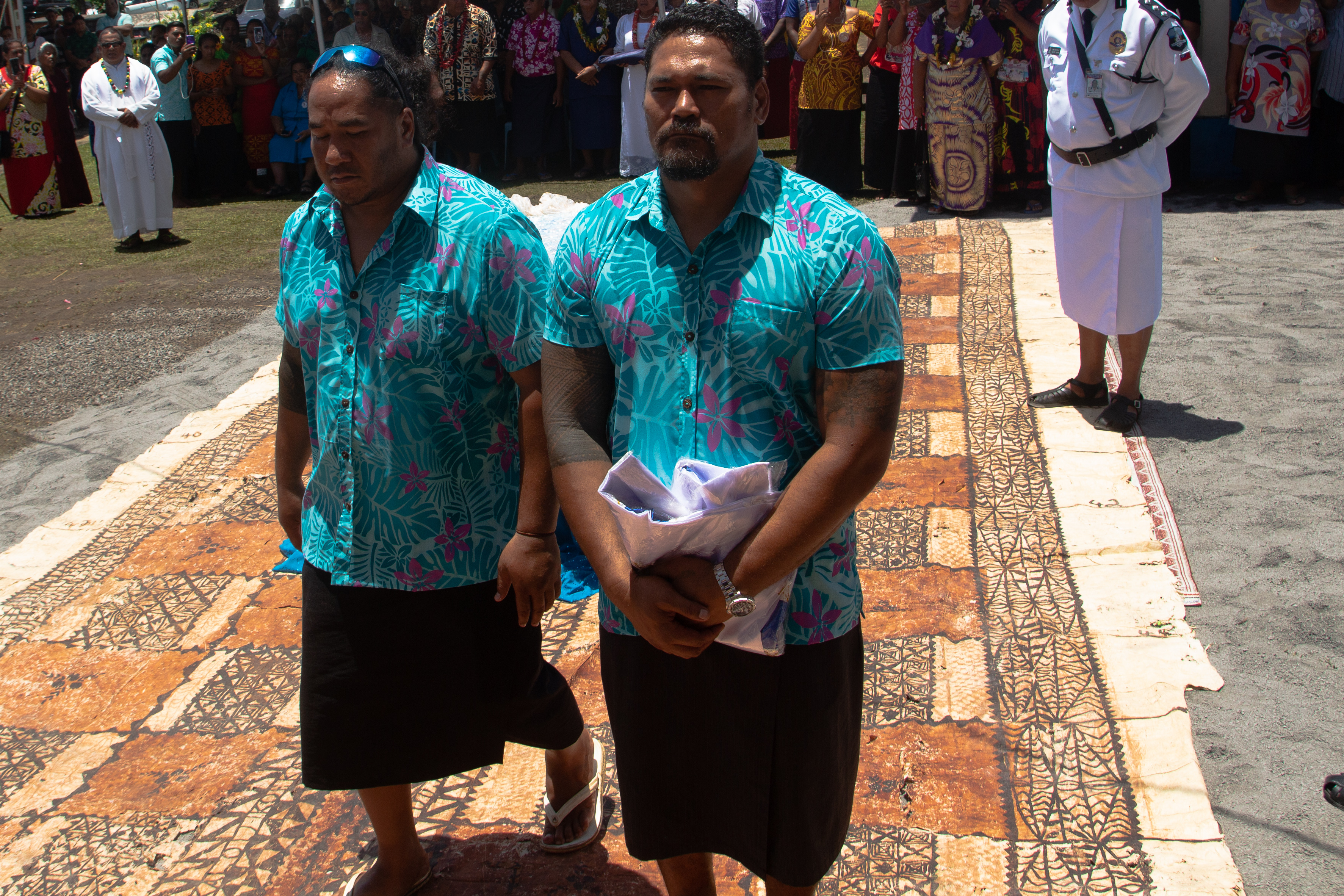 "The orator from Safotulafai needed no introduction wherever we went."

As the Chairman of the Samoa Rugby Union, Tuilaepa also thanked Namula'ulu and his sons for their contribution. Tuilaepa remembered Namulau'ulu as a father who spoke fondly and was proud of his sons' achievements.

"This father and his sons made the title Tuilagi well-known all throughout the world," said Tuilaepa.

"And that just that, they put the name of the village and district, Safotulafai, and Samoa on the map through the game of rugby.

"This reflects how courageous these sons of Safotulafai are. They strive for the best and to win.

"The youngest son of the brothers, Manu Samoa Tuilagi is the first son of Samoa who was born and raised in Samoa to play for England, the country where rugby originated from.

"Something that we are proud of.

"The President of the S.R.U. is also from this village and district, Namulau'ulu Sami Leota.

Tuilaepa was also given the honor to hand over the flag of the Independent State of Samoa to Namulau'ulu's wife and children as a token of appreciation for his service to Samoa.

The matriarch of the Tuilagi household, Su'a Ali'itasi Taupa'u-Tuilagi remembered her late husband whom she called "Vavae", as a family man, a loving father, and a devoted husband.

"He loved me dearly during our time together,” she said. 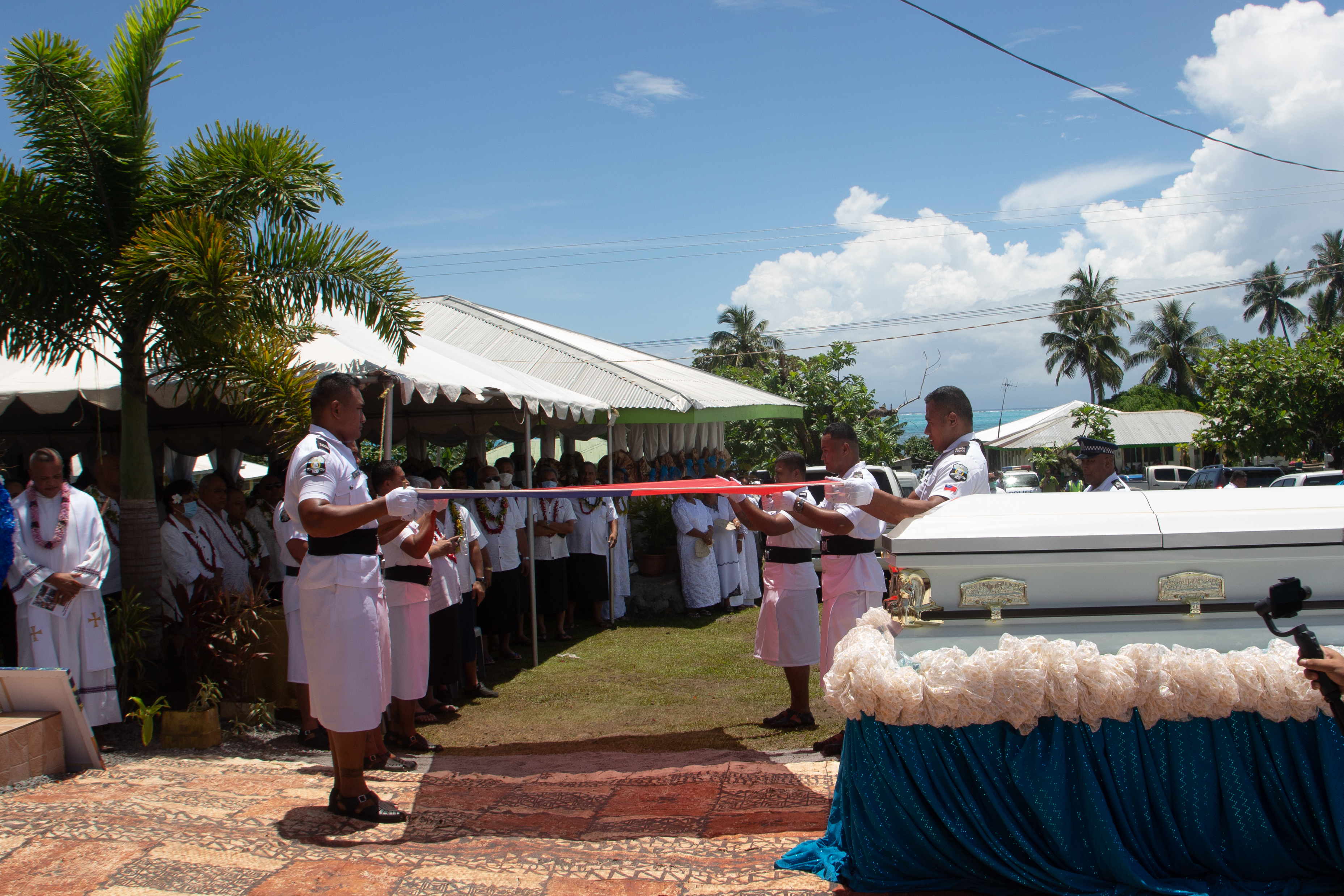 Su'a took the opportunity to thank the Prime Minister and Cabinet Ministers who would always stop by their house and visit Namulau'ulu at their house, during their many visits to Savai'i.

"From the bottom of my heart, I convey our sincere gratitude to the Prime Minister and Cabinet Ministers for the love you have shown towards Vavae,” Su’a said.

"Your kindness will never be forgotten in my heart."

Namulau'ulu's son, Leaupepe Tiafau Alesana, better known as Alex Tuilagi, fought to hold back tears as he reminisced about his father and their bond.

Leaupepe said he moved back to Samoa in 2017, to look after his family and especially his father.

Since then, he had grown so close to his father and learned a lot from him, he said.

The last time he spent with his father before he passed away, said Leaupepe, was when they celebrated his 75th birthday at the beginning of this month.

"I didn't think this would be his time to go," Leaupepe said.

"And this still feels unreal to me. But I find solace knowing that he is in a better place now.

"We love and miss you so much, Papa!"

His other son, Olotuli, who is better known as Julie, also spoke fondly of his relationship with his late father.

Olotuli is the only Tuilagi brother who did not play rugby and was the only one who stayed with their parents.

"The thing I am most grateful for was that my father was very understanding of how I turned out. Unlike other families where parents are so against having fa'afafine sons. My father was not like that,” Olotuli said.

"He accepted me for who I am and who I became.

"We did not always see things eye-to-eye. We had a really funny relationship, we had our good days where we talk to each other like a brother and sister. But there were also days where we talked like brothers when we're not on good terms.

"Our Papa was a proud dad. He was proud of his sons' achievements. And sometimes when he said it out loud that he was so proud of his other sons, I would ask him if he was ever proud of me.

"Then he would laugh and said that he was proud of the way I danced."