They join previous winners the European Lawyers in Lesvos, a group of volunteers giving free legal help to thousands of refugees and asylum seekers, including unaccompanied minors, escaping Syria, Iraq and Afghanistan.

It is the first time the awarded has been used to honour the global climate change challenge and a grassroots organisation fighting to save their islands from its impacts.

In 2017 the award went to a collective of indigenous people in Mexico fighting against fracking and oil mining, and in 2008 a Brazilion Bishop won the award for his actions against a river transposition that would have affected the local fishing economy.

Speaking to the Samoa Observer, Auimatagi said the award recognises the region’s efforts to deal with the climate crisis, at both a grassroots and Government level.

“Climate Change is not only a question of science and politics, it is also a moral question,” he said.

“The award also signals that the work we do isn’t just about science or politics or economics, it’s about people.

“It’s also recognition of what Pope Francis has been saying for some time now, [that] the dignity of the person and how one lives in their environment are inextricably linked. The church is speaking what our people have long known for thousands of years.”

In an acceptance speech during a ceremony hosted in Auckland this week on International Human Rights Day, Pacific Climate Warrior Mary Moeono-Kolio shared how she and her family are witnessing the dire impacts of climate change in real time.

“In my own home of Falefa in Samoa, my dad - who is here today with my mother - has seen within a period of just 50 years, his primary school grounds disappear under the waves,” she said. Ms. Moeono-Kolio is Aumatagi’s younger sister, and is the leader of the Wellington branch of Pacific Climate Warriors.

“His mother’s village of Ti’avea - where he grew up as a young boy playing with his friends - is today,  essentially deserted due to the frequent severe weather events such as cyclones and floods that have rendered the village uninhabitable.

“Climate Change is the one of the greatest acts of violence and destruction that my generation is witnessing play out in real time, and so it is not only within our power but our moral duty to stand against it.” 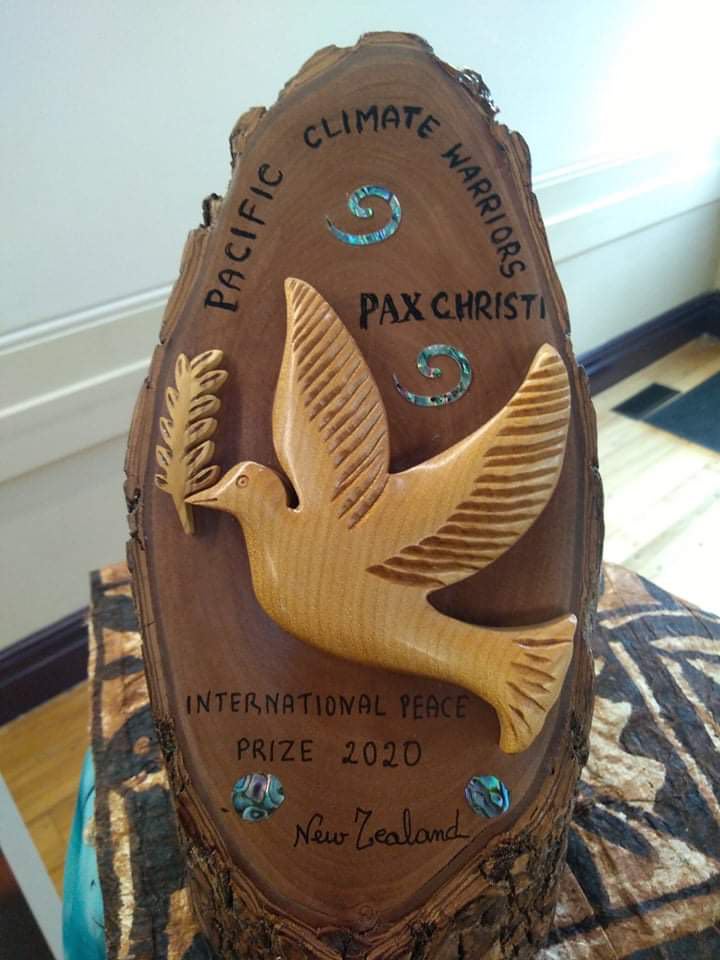 In 2019, the group was invited by the Archdiocese of Wellington’s Justice and Peace Commission to present to a meeting of the environmental organizations, indigenous groups and faith organizations, Auimatagi explained.

“The Secretary-General of Pax Christi international was in attendance and was moved by the work of the warriors. Pax Christi is the official international Peace Advocacy organization of the Catholic Church and through our meeting and subsequent conversations, they became very interested in our work and ethos.”

In a statement, Ms. Vanaeschot said the Pacific Climate Warriors are an example to society.

“Their determination, their creativity and their seriousness in empowering young people to take action to protect their culture and to advocate for the survival of their islands are inspirational and worthy of support,” she said.

“At this time, as the Catholic Church deepens its commitment to the teachings of Laudato Si’, which reminds us that we are truly one community, we celebrate the Pacific Climate Warriors and the example they show us.”

The Laudato Si` is Pope Francis’ second encyclical and a critique on climate change, irresponsible development and consumerism. It was published in 2015 and was widely accepted as a directive by the Vatican to act on climate change.

The group, connected to the global non-government organisation 350.org, is a network of activists from 17 Pacific Islands, New Zealand, Australia and the United States.

They focus on highlighting their vulnerabilities to climate change and promote change, including a longstanding campaign against the fossil fuel industry.

The Pax Christi International Peace Award is funded by the Cardinal Bernardus Alfrink Peace Fund and was established in 1988.