The Teramana bottles have landed at Tee-20. (Photo: Natalia Media)

Tequila lovers in Samoa are lining up to get their hands and taste buds on one of the hottest tequila brands in the world today.

Bottles of Teremana, made in the Jalisco Highlands by a company owned by world famous Samoan, Seiuli Dwayne Johnson, have landed in Samoa, and they are the first in the Pacific.

In the small, secluded and breezy Tee-20 bar and restaurant at the Fagali’i Golf Course, you will be able to see in person, the Teramana range, ahead of the official launch on Friday.

The Owner of the bar and restaurant, Matatamali'i Leata Mailo-McCarthy, said the arrival of the bottles has created a lot of excitement with tequila lovers already placing bids to buy the bottles of Teremana off her.

Being able to be the first to being the Teramana tequila to Samoa brings a sense of achievement for Tee-20 especially during the lockdown. But the tequila means a lot more than just another bottle of achol for Matatamali’i.

“Basically, I love The Rock and I always thought he’s such an awesome inspiration for us Samoans and he’s done so much in this world,” she said.

“I’ve always followed his journey and I saw that he launched the Teramana, when I opened the bar, I thought of ideas to do promos and stuff, it was really difficult so I thought, how can I get myself one of those? Even going onto his own Teramana website, they can’t send them outside of the U.S .so apparently, he makes them in small patches.

“It’s not like mass-produced, they were all hand made in Mexico, and so I followed it because he launched it not very long before the borders closed.

“I’ve been trying to get my hands on how to get it here and it was really difficult.”

Matatamali’i said New Zealand, Australia and the other Pacific countries don’t have it.

“I thought American Samoa would because they’re a territory of America but they didn’t when I checked and I wanted to be the first one to bring that here and especially knowing that us Samoans, we’re often very patriotic of him so I thought ok.”

Fortunately, having friends who are living in the America was the magical wand for the business woman.

“So one of my friends are based in the States.”

“Now I have quite a few businesses who want to get involved as well and come on board and so they can see that it’s such a big thing and that we are the first bar in Samoa and the Pacific to have this Teramana,” she said.

“We’ve been trying to get a hold of the guy to see if he can endorse the bar and also on his timeline but I think what he usually shares is when you actually post a video of doing the Teramana in your own way of drinking it.”

On the night of the launch, an official video will be made. This will be posted on social media platforms where Seiuli will be tagged.

“We’re hoping and praying that he will share it because after all, it’s the only one from his home,” Matatamaalii said.

The Teramana had been through the Covid-19 process of quarantine before it flew and after it landed in Samoa. The mission was not cheap, according to the proud business woman.

“For me, it’s utilising the opportunity to promote our bar and for people to be aware of where we are because we are fairly new and the services that we offer and it’s such a beautiful place,” she said.

“We also use such opportunities to promote our businesses because it’s been really bad times. No one of the stockists would do the logistics of it because especially during the lockdown and for small amounts so we couldn’t bring a whole container.

“For me, it was more like just getting it here so we can claim that we’re the first ones to have it here so it’s very limited stock at the moment.”

According to Matatamaalii, she is already exploring another lot to be sent over. 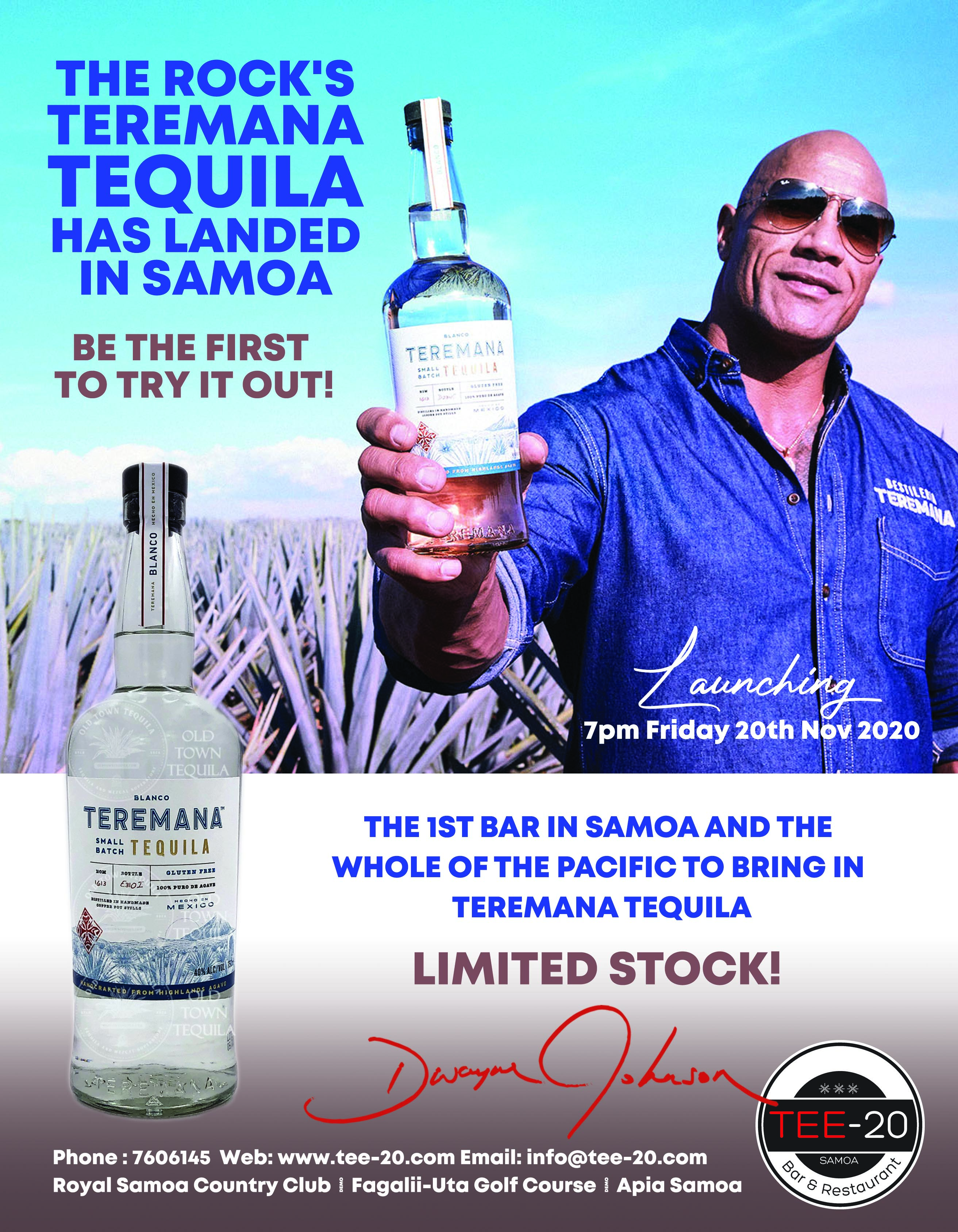 Crafted in a small Mexican town, amidst the highest peaks of the Jalisco Highland mountains, every step of our tequila making process is meticulously done the right way at Distileria Teremana de Agave, Seiuli stated in his bio.

“The jimadores harvest fully mature naturally sweet agave, we then slow roast them in small traditional brick ovens, and distill in handmade copper pot stills. This creates a bright flavorful tequila that honors the land it comes from.

“In life we care about the things that have deep meaning to us – family, friends, work, good times and the not so good times. Our tequila is no different.”

TEREMANA combines two words that are meaningful. ‘TERE’ derived from the Latin ‘terra’ meaning earth and ‘MANA’, the Polynesian word meaning spirit – Teremana is the “Spirit of the Earth

No changes to passengers on repatriation flights