Samoa commissioned its first Afolau 750 kilowatt Biomass Gasification Plant on Friday in an $11.3 million investment that was hailed as a major step on the country’s journey to renewable energy transition.

Tuilaepa said that the total cost of the project was in excess of $11.3 million.

He said a company from India called Ankur Scientific Energy Technologies Private Ltd was awarded the contract to construct this biomass plant.

It subcontracted to local companies such as Ah Liki Construction and Transworks Ltd, to carry out other civil works.

Biomass gasification essentially involves the conversion of solid fuels like wood and agricultural residues into a combustible gas mixture. 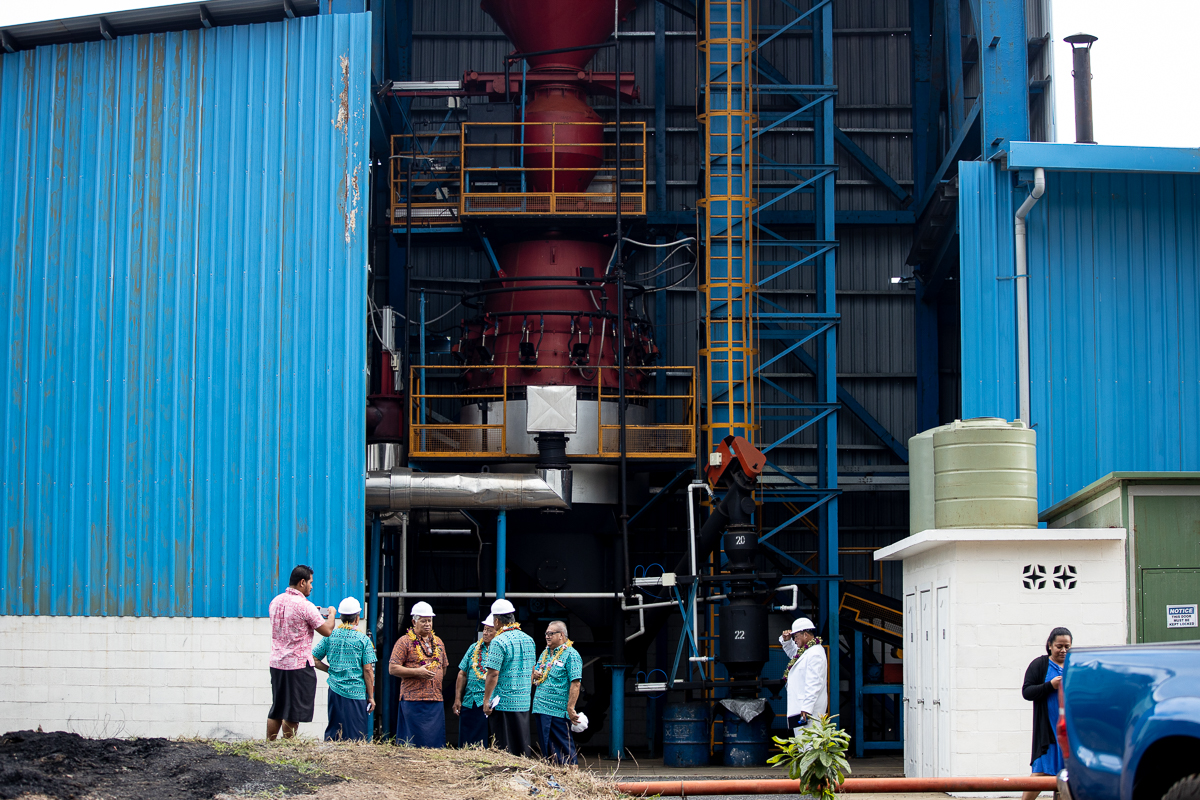 It was funded by the Global Environment Facility (G.E.F.) via the United Nations Development Programme (U.N.D.P.), and the European Union and the Government of Germany’s Government Agency of International Cooperation.

The project was implemented by the Ministry of Natural Resources and Environment, Ministry of Finance, Electric Power Corporation (E.P.C.) and S.T.E.C. 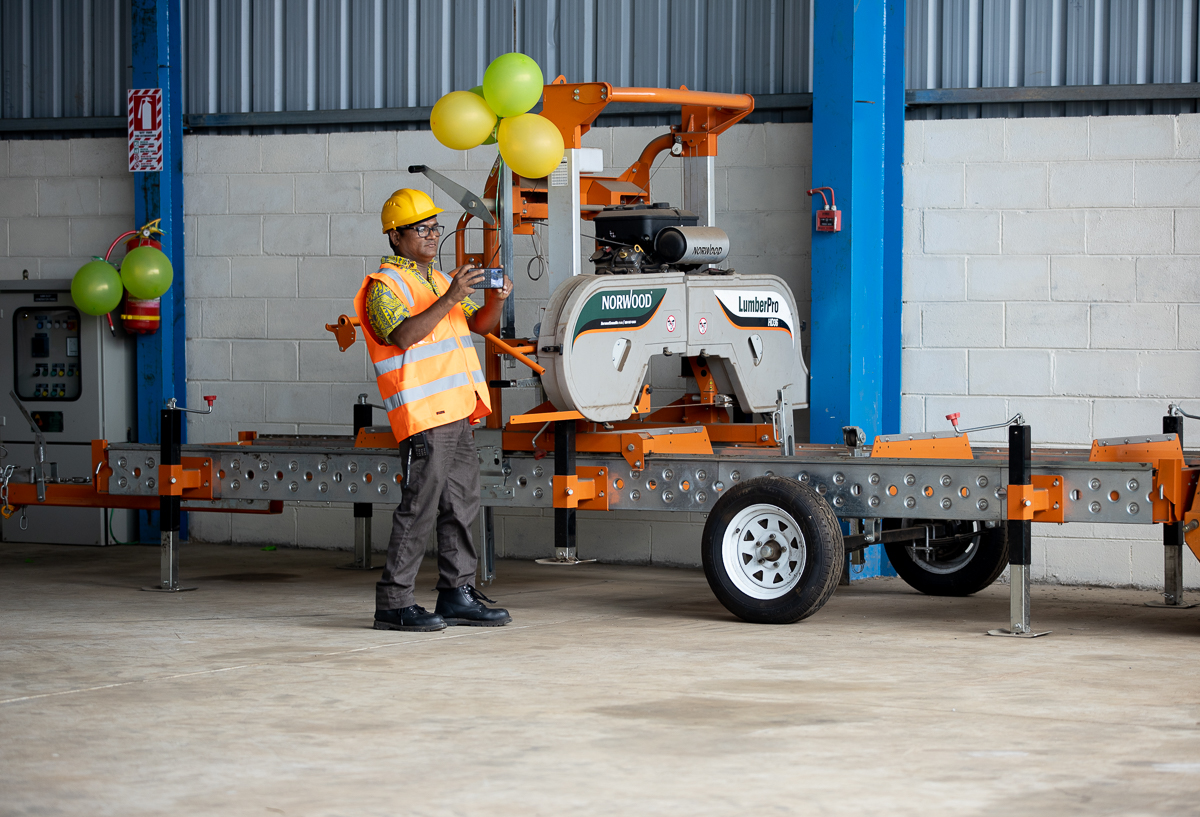 The Prime Minister said in his keynote address that the construction and completion of the plant was one of many renewable energy developments underway in Samoa.

“It signifies the mainstreaming of locally produced energy for electricity generation rather than being dependent on fossil fuel importation,” he said.

He added that this was in-line with the government’s ambition to generate all of its electricity from renewable sources by 2025. 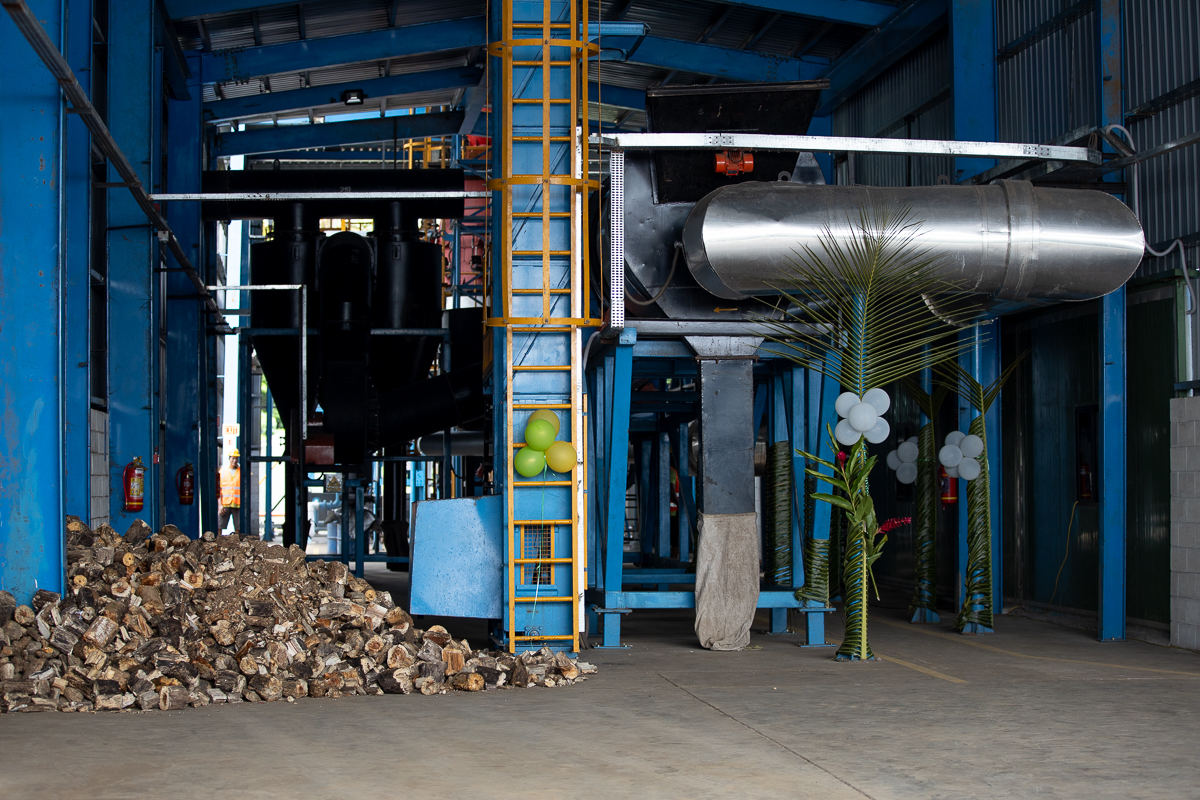 “At the moment, we have been able to generate approximately 50 per cent of electricity from three renewable sources such as solar, wind, and hydro,” he said.

He said that the new Gasification plant will be added to the list.

“This Plant is one of the first technologies in Samoa and a few in the Pacific which converts biomass materials (organic) into electricity through a series of processes. 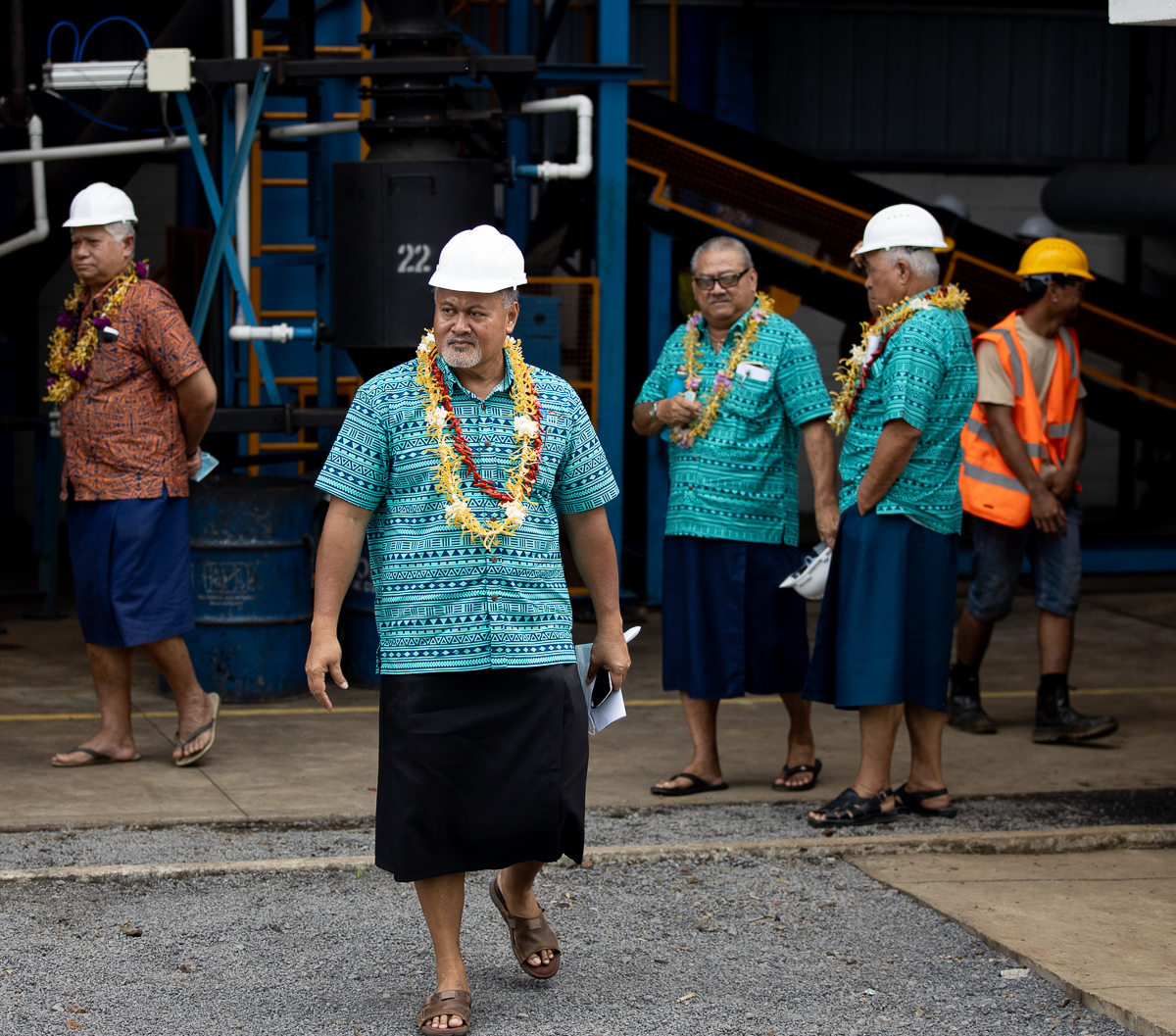 “The technology ensures the reduction of our greenhouse gases emissions and contributes towards reducing our carbon footprint and climate change impacts.

“The Plant will incinerate biomass materials in order to generate electricity and these biomass materials are a mixture of four invasive species such as: tamaligi, puluvao, pulumamoe, faapasi and old coconut trees, which are harvested only within allocated perimeters of S.T.E.C. lands.”

Tuilaepa also explained that the gasification plant has a capacity of 750 kilowatts which can generate 5 million units (kilowatts per hour) in a year. In order to meet this generation capacity, the Plant will be fed with 24 tons of biomass materials; the equivalent to 7,000 tons of biomass materials per year. With 5 million kilowatts per hour produced in a year, it can provide electricity for approximately 5000 households. 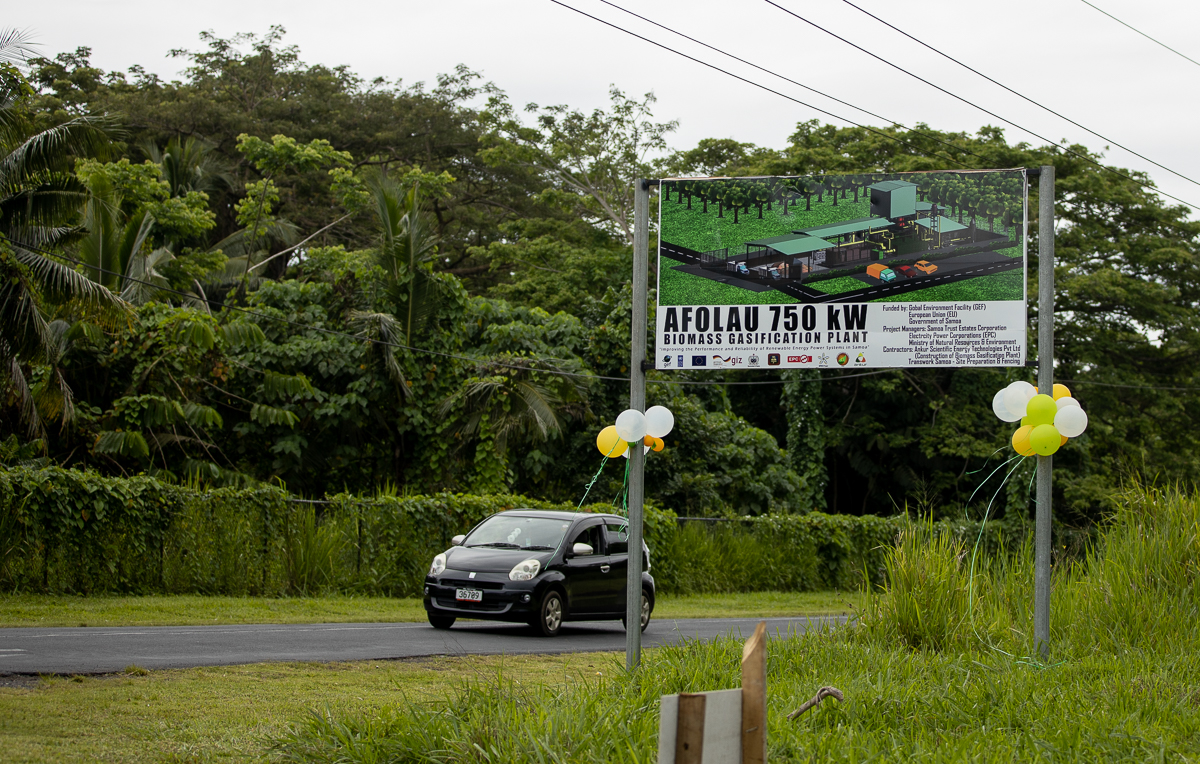 “The electricity generated from this plant can replace 1.25 million litres of diesel used by E.P.C., which cost around $3 million,” he said.

“This can contribute to our N.D.C. goal by reducing our GHG emissions in the Electricity sub-sector by 3.7 tons in a year.

The U.N.D.P. Resident Representative, Jorn Sorensen said that the organisation is fully committed to working with the Government in addressing the threat of climate change.

“Samoa has shown great dedication in combating climate change by reducing greenhouse gas emissions that contribute to global warming, amongst other commendable actions,” he said.

“The launching of this plant has proven to the region and the world that Samoa remains true to its word and means business when it comes to climate-proofing its future.

“The Biomass Gasification Power Plant has made Samoa an example to other Small Island Developing States to emulate in the wise use of its indigenous biomass resources as a sustainable energy resource, as well as incorporating it with Samoa’s other developments in areas like agriculture as demonstrated by S.T.E.C.”

Construction for the Biomass Gasification Power Plant began in February 2019 and ended the same month in 2020. It was connected to the E.P.C. grid in April 2020.

The plant is part of the Improving the Performance and Reliability of Renewable Energy Power Systems in Samoa project.

As the Gasification Plant is built on Government land in Afolau it has been assigned to S.T.E.C. to run as a business. S.T.E.C. and E.P.C. have entered into a 20-year-long Power Purchasing Agreement for S.T.E.C. to operate and maintain the Plant to generate electricity and sell it to the E.P.C.

The total grant was divided into about $8.7 million for Ankur Scientific Energy Technologies Private Ltd for assembling the Gasifier; $237,000 for Transwork Ltd for groundworks; $877,500 to King Construction for supplying heavy machinery; $40,000 to the Electric Power Corporation for electricity connections to the grid and installation of a data system, $31,710 for the procurement of other equipment; and $1.4 million in V.A.G.S.T. and other duties.