A total of 17 people are in managed quarantine after working with the now-infected container ship that passed through Apia this weekend, the Government has confirmed.

Four are Government staff from the Ministry of Health and the Samoa Port Authority and 13 are stevedoring crew members who helped dock the Fesco Askold and unload the containers.

The National Emergency Operations Centre (N.E.O.C.) fronted up to media on Wednesday morning, in an hour long press conference about the infected container ship that passed through Apia on the weekend.

Leausa said the 17 crew members aboard the ship had cleared the national requirements for entry, including a negative COVID-19 test results from their previous port Tahiti, and cleared the on-board health check conducted by local officials.

Because of this, none of the crew were tested in Apia but the four person crew that went on-board were in full personal protective equipment, the Director-General said.

None of the crew disembarked the vessel, and the local officials that boarded the vessel at the quarantine buoy off the coast of Apia did not interact closely with them, Leausa added.

Because of this, the Government is considering this a very low risk event and is not conducting further contact tracing or asking contacts of the 17 staff in quarantine to isolate.

On Tuesday, the families of St. Peter’s Chanel Community School were advised that a family member of a child was “in direct contact” with one of the crew clearing cargo from the vessel.

Students went home early and will be told when to return next.

Agafili confirmed these instructions did not come from the N.E.O.C., and that there is no expectation for “casual contacts” to be isolating at this stage.

“The risk is very low. We only do contact tracing when we have a positive case, a highly suspicious case,” Leausa said. 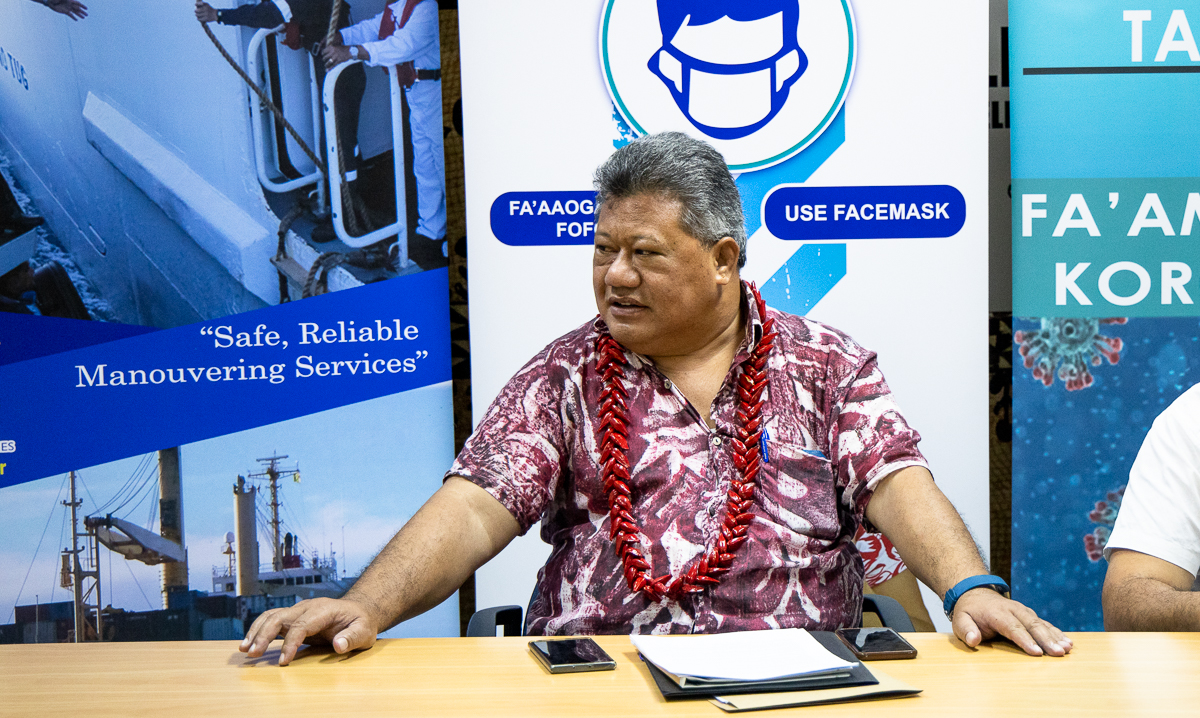 The Director-General also explained why the crew, like other arrivals into the port, are not tested and a negative result confirmed before they offload containers into the wharf.

He said the current protocol is the same as it is for arrivals by plane: crew must have a medical certificate and a negative COVID-19 test result within three days of arrival into Samoa, which is confirmed before their arrival and again at a quarantine buoy off the coast off Apia.

At the beginning of the state of emergency, Samoa had little to no testing capacity, the Director-General explained.

“We checked if they had fever or any flu like symptoms and see the countries they have visited as stated in their papers, before they are allowed in.

“Before there were even tests, if the vessel came from Tahiti where they have a lot of positives, we stop them from coming, only the vessels from countries that don’t have positive cases.

“But as soon as we got tests, we started telling them to conduct tests before the vessels came, just like what we do to those arriving from New Zealand and Australia on flights.”

Because the crew was never going to disembark there was no need to test them for COVID-1, he explained. Before the pandemic, crew used to enjoy spending time on shore doing shopping and other chores, but now they do not.

For now it is hard to say whether the crew who tested positive were actively infectious whilst in Apia’s waters, as people with COVID-19 can be infectious while they do not show symptoms.

American Samoa’s Department of Health epidemiologist Aifili Dr. John Tufa confirmed with the Samoa Observer that as of Wednesday morning Apia time, the three positive crew members have not displayed symptoms of COVID-19.

Leausa would not speak to the matter of how M.O.H. has determined whether or not the crew were infectious and how that has informed the N.E.O.C. response, but invited the Samoa Observer to put the question to him after the press conference.

After the press conference, Leausa insisted the question be asked without being recorded. He then told this newspaper as far as he knows, no one was contagious so it is “not important.”

Asked whether new information about symptoms presenting in the coming days might change Samoa’s response, he said no.

The N.E.O.C. said with all the containers disinfected at the port, there is no risk of surface transmission of the virus.

Ports Authority C.E.O. So’oalo said the vessel, which originated in the United States of America, brought 143 containers to Samoa.

It took 10 hours in total to offload the containers and also add 63 empty or transhipment containers to the vessel to take to other destinations.

He also thanked the ports authority and health crew for their patience and support to maintain Samoa’s COVID-19 free status.