The C.E.O's vehicle after the vehicle accident on Friday, 30 October. (Photo: Supplied)

Quick action by the husband of a Government Ministry’s Chief Executive Officer saved his family from a potentially fatal collision with a vehicle late last month that was allegedly driven by a drunk driver.

Photos of the damaged Toyota Pickup Double Cab emerged on social media on the weekend of 30 October to 1 November, showing the vehicle being towed away and parked at an unidentified location in Apia.

The Deputy Police Commissioner, Papali’i Monalisa Tiai-Keti, confirmed in an email response on Monday to questions sent by the Samoa Observer that there was a crash involving a Ministry of Customs and Revenue [M.C.R.]-owned vehicle on that weekend and a man has been charged for driving under the influence of alcohol.

M.C.R. Chief Executive Officer, Matafeo Avalisa Viali-Fautualii, stated in an email to this newspaper on Tuesday that her husband was driving her and their children in the Ministry-owned vehicle when they were hit by another car at Tanugamanono on Cross Island Road.

“Our Ministry had already filed irregularity report to M.O.F. [Ministry of Finance] on this unfortunate accident,” Matafeo stated in her email.

“But despite all costs, I am forever thankful to our heavenly lord that no one of my family was hurt from this accident.”

According to a report filed with the Ministry of Police, Iuli Fautua'alii Sefo Fautua'alii was driving Matafeo and their son and daughter after picking up the daughter from a birthday party at around 10.15pm on the evening of Friday 30 October.

When the family reached the Tanugamanono curve, where Marfleet Printing is located, Matafeo saw a car [Toyota Vanguard] speeding towards them and immediately alerted her husband.

Fautua'alii saw the vehicle and swerved to the side to avoid colliding with it, only to see a drain on the side, which compelled him to turn back onto the road, stated the police report.

The police report stated that Fautua'alii thought they were able to avoid the collision, but he was surprised when the other vehicle hit the right rear tyre of the M.C.R. vehicle, which caused it to spin next to the drain. 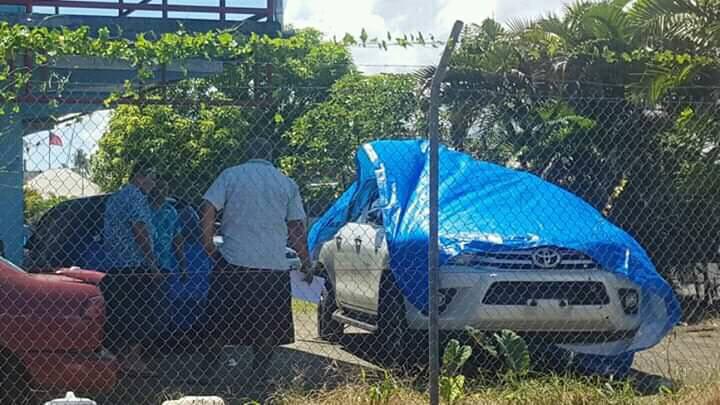 Fautua'alii then checked for the other car and saw it in the drain on the left side of the road and he could hear its driver trying to start the car despite the accident, stated the police report, which compelled him to get out and stop the driver from leaving before the police arrived.

Matafeo’s husband quickly walked towards the vehicle and he saw three men of Asian origin inside with one in the back seat seemingly unconscious with blood on his face. Returning to the M.C.R. vehicle, he found that it could not move due to the damage caused including the tyres being flat.

According to the police report, Matafeo called the Police Commissioner while her husband checked the other car and its driver and passengers, to report the crash and request assistance.

The family then headed to the hospital as their son had a headache and the daughter’s back was in pain following the accident.

While two of the other vehicle’s passengers were taken in by the Police and the third put on an ambulance and taken to the hospital.

Papalii, when asked what action has the Police taken in relation to the crash, said on Monday that the driver of the private vehicle is scheduled to appear in court this month.

“Matter was attended by the traffic division and the driver of a private vehicle that crashed into the Ministry vehicle has been charged for driving under the influence of alcohol and he is scheduled to appear before court on the 24 November 2020.”

One hundred and seventy-three (173) frontline workers who serviced the repatriation flight on the 13th of November were all tested negative of the coronavirus.