Some 30 years after his first run for President, Joe Biden was declared the winner of the 2020 election early on Sunday morning Samoan time.

With four states yet to be called former Vice-President Biden has achieved 279 Electoral College votes - beyond the 270 required to win.

He was declared by the nation’s most respected media outlets, including the Associated Press and the New York Times as the victor in the election.

But President Donald Trump refused to accept those projections on Saturday. He immediately accused Biden of “rushing to falsely pose as the winner”.

The Republican has made repeated claims of electoral fraud without providing evidence, and his campaign has pledged to challenge the result in some battleground states.

The Associated Press’ Julie Pace analyses how President-elect Biden was able to carve a path to the White House ine one of the most chaotic elections in living memory:

Joe Biden’s bet on the 2020 race was a simple one: that a nation riven by deep partisanship was ready for a reset.

Biden ultimately emerged victorious over President Donald Trump, a moment of both celebration and relief for his supporters. But the results sent mixed messages about the nation’s eagerness to turn the page on one of the most polarized periods in modern American history.

Biden carried some of the key battleground states, including Pennsylvania and Wisconsin, by narrow margins. He won more votes nationwide than any presidential candidate — more than 74 million and counting — but Trump’s popular vote total also topped previous records, reflecting the president’s hold not only on his core supporters but the Republican Party at large.

With victory in hand, Biden has claimed a mandate. Whether he actually has one will soon be put to the test.

Not only were Biden’s margins of victory in the battleground states tight, but Democrats struggled in Senate races across the country. Their hopes of flipping the chamber and giving Biden the leverage he would need to pass major legislation will likely rest on a pair of Senate runoffs in Georgia in January. 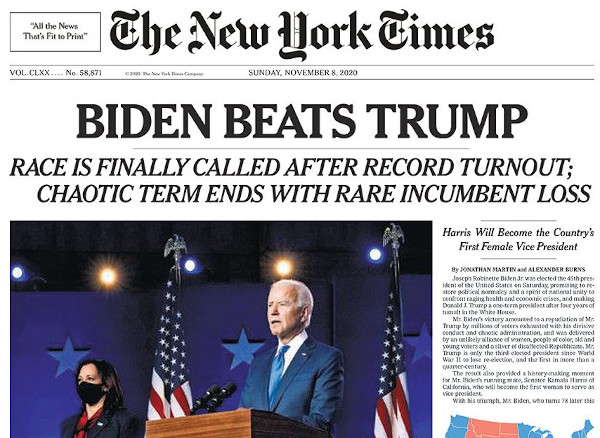 The 2020 campaign also made abundantly clear the depths of Trump’s support, particularly among white, rural Americans. They saw in Trump an unlikely kindred spirit, a president who fought aggressively against establishment forces in Washington, in Hollywood and other pantheons of power. He made his supporters’ grievances his own and gave them a voice where they believed they had none.

Trump has also so far not conceded the election to Biden, vowing to launch unspecified legal challenges to the outcome. His refusal to concede, however, does not have any practical impact on Biden’s victory.

Trump can, however, make Biden’s transition into the White House difficult. He gets 10 more weeks in office and can wield his executive powers across a range of issues. And once he does depart the White House, he’ll still have his high-octane Twitter feed, and perhaps even a continuation of his rallies, to keep mobilizing his supporters.

Biden will have to navigate that deep divide among Americans. And in Washington, he may try to revive a lost art: bipartisan compromise.

Some Democrats scoff at the notion that Republicans might see any incentive to work with Biden. Others believe Biden’s long history in the Senate gives him a fighting chance of winning over some in the GOP.

“The fact that he has long-standing relationships with Republicans in the House and Senate will be an advantage. He’s a known quantity to them,” said Valerie Jarrett, who worked with Biden while serving as a senior adviser to President Barack Obama.

Biden will also be pushed from the left flank of his own party. Liberals largely put aside their own frustrations with Biden’s more moderate record during the general election, deciding that the need to defeat Trump was greater than their differences with the former vice president’s health care or climate change proposals.

“Electing Biden is not the end-all, it is the beginning,” said Sen. Bernie Sanders of Vermont, who challenged Biden for the Democratic nomination, then led the way in urging progressives to back him.

Biden’s victory does bring to an end Trump’s tumultuous administration and signals a new approach to the nation’s handling of the coronavirus pandemic, economic uncertainty and social unrest.

Throughout the 2020 race, Biden cast the stakes as nothing short of existential, warning that four more years of a Trump presidency would “fundamentally change the nature of who we are as a nation.” This was more than an election, he argued, it was a battle for the very soul of America. It sounded like a cliché, but seemed to resonate with more Americans with each passing week of the campaign.

Part of Biden’s argument centered on the goodwill he had built up with voters, particularly during his eight years as vice president. Despite relentless attacks from Trump for more than a year, a majority of Americans maintained a favorable impression of the former vice president. When Trump tried to brand Biden as a far-left socialist or a corrupt criminal, Biden’s strongest rejoinder was often to turn to a camera and tell Americans, “You know me.”

“For voters, they knew who he was, they knew what he stood for, they knew he was a good person with an honest heart,” said Sen. Kirsten Gillibrand of New York, one of two dozen Democrats who challenged Biden for the party’s nomination. “He really was the right man for the moment.”

For many Americans, the direct consequences of Trump’s presidency grew more dire in these final months of the campaign, as the coronavirus pandemic took hold. More than 236,000 people in the U.S. have died from the virus, the highest confirmed total in the world, and the country is setting more records for cases as the weather cools and more activities move indoors. The pandemic is also blamed for wiping away millions of jobs, and there are fears of another economic downturn to come.

Biden took a calculated risk as the pandemic took hold, turning his own campaign into a model of how he would manage the crisis as president. He shuttered his campaign headquarters and halted his in-person events; when he did travel, he wore a mask and kept his distance from others. The contrast between Biden and Trump, who continued traveling the country for rallies and ultimately contracted the virus himself, was stark.

Now, the pandemic and its ripples across nearly every aspect of American life will soon be Biden’s to manage. He will inherit one of the most complex sets of issues to face an incoming president since Franklin D. Roosevelt took office in 1933 during the Great Depression.

For a moment, however, Biden can bask in the crowning achievement of his nearly five-decade career in public life. He ran for the presidency twice before 2020, both failed, short-lived campaigns. After he passed on running in 2016, it appeared likely his White House ambitions would go unfulfilled.

It was Trump who pulled him back into the arena, who gave his campaign a sense of purpose. It is Trump who helped him win.