The four men convicted of manslaughter in the death of a Samalaeulu father. (Photo: Aufa'i Areta Areta)

Supreme Court Justice Tologata Tafaoimalo Tuala-Warren has warned about the dangers of excessive consumption of “locally produced Rover vodka” while delivering a sentence for a manslaughter case in Samalaeulu.

Her honour also called on the “relevant authorities to address the issue of locally produced vodka as it has featured largely in offending behaviour which has come before the Courts.”

Justice Tologata’s comments were made during the sentencing of four men who pled guilty to a joint charge of manslaughter after a 38-year-old father, Sauiluma Kasiano, was killed in a violent stoning incident in August last year.

“This case brings to the fore yet again the dangers of excess alcohol consumption of locally produced Rover vodka for which there is insufficient public awareness.

“I share my colleagues’ and the Police Commissioner’s concerns about the role locally produced vodka plays in the commission of crimes.

“The relevant authorities are encouraged to address the issue of locally produced vodka as it has featured largely in offending behaviour which has come before the courts."

Their conviction stemmed from an incident that occured after they had consumed Rover-brand vodka.

The four defendants are Mamoe Aiese, Foaga Ipu, Leu Saulo and Paulo Mika of Samalaeulu who appeared in court for sentencing on one joint charge of manslaughter.

“They had all previously pleaded guilty to one joint charge of being armed with a dangerous weapon,” Justice Tologata said.

“The unnecessary loss of life in this case is tragic and incalculable."

Prior to sentencing of the defendants, her Honour acknowledged the loss of life of a father and husband.

Mr. Kasiano was a 38-year-old male of Samalaeulu, who was married with seven children; the youngest of whom was one year old.

His wife says that she and the children have now moved to Faletagaloa, Safune as she has struggled to provide financially for their children. One of the children has been given to her sister to provide for that child’s education.

According to the Police summary of facts accepted by all defendants, on 31 August 2019 sometime in the evening at Samalaeulu, the defendants had a vodka drinking session at which they congregated on the main road next to a rock fence.

The deceased man had drunk a beer after picking up his father from Salelologa wharf and was driving around in his car.

After their “drink-up”, the four defendants made their way to the road in the evening and hung out by the roadside that night, submitted Ofoia.

Later that same evening, the deceased drove past the area where the defendants were hanging out. He was intoxicated and swore loudly so that the defendants heard him.

Consequently, the deceased stopped his vehicle by the roadside, near the area where the defendants were sitting. The defendants then approached the vehicle and started throwing rocks at it while the deceased was still in the car.

When the deceased got out of the vehicle to approach the men, they continued to throw rocks at him, which hit him and injured his head and saw him falling to the ground. The defendants allegedly ran away from the scene.

The deceased was then taken to the Tuasivi Hospital where but pronounced dead on arrival. 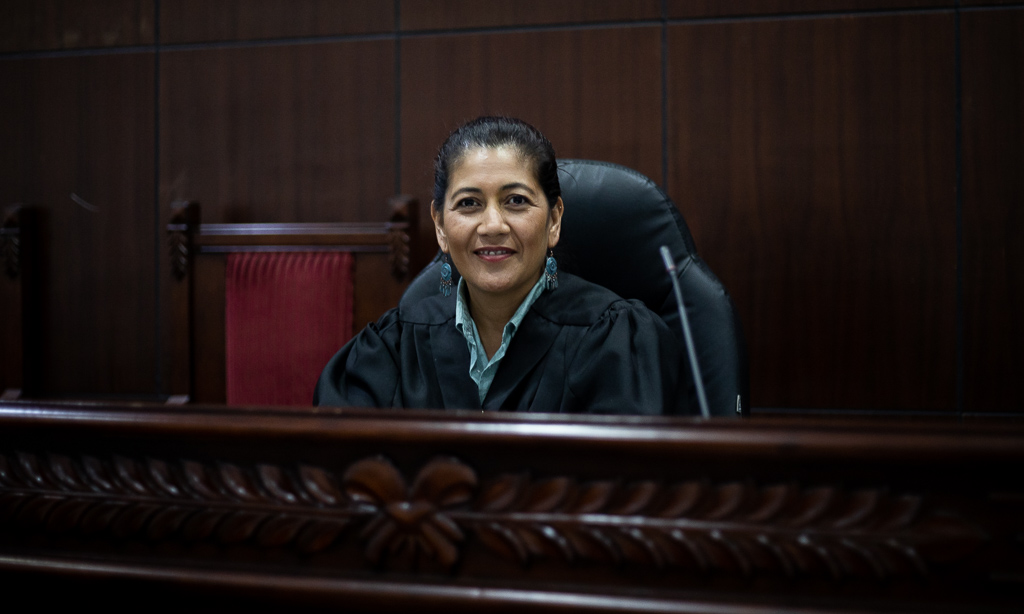 “The loss of liberty for these four young defendants is tragic for their respective families."

According to the judgment of sentencing, the defendants were all banished from Samalaeulu and their families each paid a village penalty of $6,000.

Mr. Kasiano's wife says that she and the children have now moved to Faletagaloa, Safune as she has struggled to provide financially for their children. One of the children has been given to her sister to provide for that child’s education.

She said that the death of her husband was a total shock to the family, they miss him and the children still ask for their father.

Justice Tologata said that all four of the defendants then threw rocks at the deceased, and even when he fell to the ground, they continued to stone him until villagers intervened.

"The victim was vulnerable and defenceless being alone. There was the use of rocks to the head of the deceased as his cause of death was head injury.”

The prosecution has submitted a sentencing starting point of 10 years imprisonment for each defendant.

Mamoe was sentenced to 3 years imprisonment, less any time spent in custody.

Foaga, Leu and Paulo were all sentenced to three years and four months.

But Paulo was sentenced in August 2020 for sexual connection with a girl under 16 and is currently serving 10 months imprisonment, this new sentence will be served consecutively.

The Ombudsman position has been on the Public Service Commission’s special advertisement board since early November. Applicants have just over to week to apply.