Taumeasina Island Resort will not sell beers in tower form in favour of jugs this month in a trial to promote responsible drinking, quicker bar service and wasting less beer.

The change was implemented on Sunday 1 November after Halloween celebrations at the resort.

The new approach was confirmed by the resort’s General Manager, Tuiataga Nathan Bucknall, who stressed that the new method of serving beer is a trial and will only be a temporary change.

Tuiataga said that he had spoken to beer companies Taula and Vailima regarding the changes before they were brought in. He said that the change was brought in to speed up their services because of the increasing demand for drinks among patrons and the greater speed of removing towers from their bar service.

“The main reason is that it slows the service so literally on a Friday night; we got two or three people just pouring towers, and you’d also see securities there pouring towers and it just means that the people at the bar are not getting the service they want,” Tuiataga said

“You might be waiting for a fishbowl cocktail but it might take longer because everyone is doing towers.

“It’s a trial to see if we can speed up our service a little bit and at the end of the day, jugs are one and a half litres and a tower is three litres and a jug is a half price of a tower and so as far as price goes, it’s exactly the same.”

Tuiataga said the changes would reduce any waste of beer as pouring beers into smaller units produces less froth - known to beer drinkers as the drink’s ‘head - which is ultimately discarded.

“You’ve stood at the bar and you’ve watched us as we’re pouring and there’s all this foam and we’re scooping off foam and that all goes down the drain and that’s beer wasted,” Tuiataga said

“Like the beer leaves the cool room in a cold keg and goes in the lines and goes into the glycol system and then it’s supposed to sit there for a certain amount of time so it can remain cold.

“The reason why it froths up is that it’s not cold enough and sometimes its gas but the main reason is that the systems are not designed to be pouring out so many litres of beer each time.”

A tower is three litres of beer while a jug is one and a half litres.

Tuiataga assured patrons that the new changes will not result in an increase in consumer prices as two jugs are the same price and volume; a tower at Taumeasina Island resort is $25 whereas a jug is $12.50. 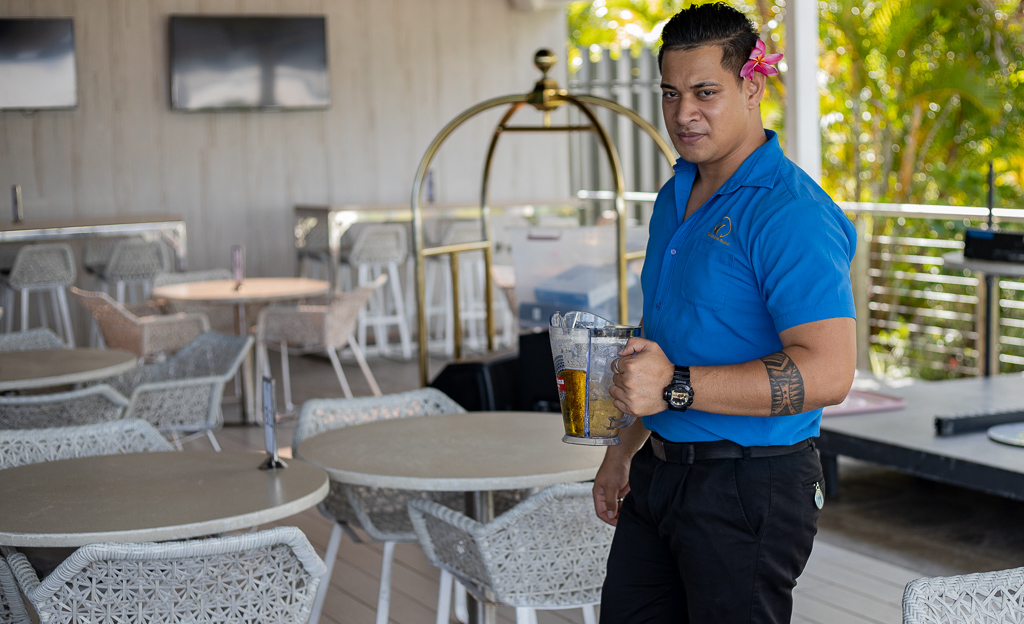 The idea was not to keep the towers away permanently but to undergo a trial to see whether their bar service will be improved without it. The resort has had to order more jugs from Vailima and Taula; all towers have been returned to the suppliers.

Tuiataga says the intent of a tower is for it to be shared among two or three people instead of everyone having their individual tower.

Doing so can lead to individuals irresponsibly consuming alcohol, he said, and the resort has already noticed changes since its changes were brought in.

“[On Friday] night [people] seemed to go easier with the jugs; it was quick service and there were a few people questioning me on the tower,” he said

“At the end of the day, it’s not responsible for the hotel to be serving that much alcohol to people and we don’t want any fallbacks from that either because we want to make sure all our guests have a good time and enjoy themselves responsibly and have fun.”