Considered under pressure to keep the No. 10 jersey before the series began, Barrett produced a masterly performance to guide the All Blacks to a 2-0 lead in the three-match Bledisloe Cup series. He was also instrumental in New Zealand's 38-13 win in the first test in Sydney last weekend.

Barrett scored twice in the first half, crucially in the 37th minute as New Zealand gained a 14-7 lead at the end of a tight opening spell.

He completed his hat trick in the 62nd to quell a brief Wallabies comeback, and then was denied a fourth try in the 65th when the television match official contentiously ruled there had been a knock-on in the lead-up.

Barrett needed only three minutes to remedy the error. He scored his fourth try in the 68th, taking his tally with five conversions to 30 points — a record for a New Zealand player in a test against Australia.

The match in many ways mirrored the first test. New Zealand scored a crucial try at the end of a tight first half, then scored again immediately after the break to launch a torrent of scoring in the second spell.

In Sydney, the All Blacks scored five tries and 33 points after halftime. On Saturday they added four tries and 26 points in the second 40 minutes.

It was New Zealand's 30th win in its last 34 tests against Australia, ensuring it remained unbeaten against the Wallabies at Eden Park since 1986, and extended its winning streak in all tests at the Auckland stadium to 42 matches since 1991.

"We respect the Bledisloe Cup and we respect what the Wallabies bring every week when we play them," All Blacks captain Kieran Read said. "It doesn't come easy for us, we've got to work really hard. We show our respect in the work we put in and we're really happy to have that cup again."

Once again, as it did in Sydney, Australia threw everything into its first-half effort and the teams were approaching the break at 7-7. But Barrett's try immediately before halftime gave the All Blacks the lead and a surge of confidence which was manifested in two tries in the first seven minutes of the second half.

Lock Brodie Retallick was again massively influential as the All Blacks demonstrated that they are more skilled, more physical and more cohesive than Australia, which is increasingly under pressure to reverse a slump in form.

Australian Rugby has endorsed Michael Cheika as coach through the 2019 World Cup but his position won't be helped by this defeat by six tries to two.

New Zealand also had three tries disallowed on the say-so of the TMO — one to Barrett, one to his brother Jordie and another to winger Waisake Naholo.

Like in the first test, New Zealand took time to break down the Wallabies defense. Barrett had his first try in the 13th, completing a long-range attack which began when winger Ben Smith won a crucial contest for possession in the air.

Australia leveled the score in the 29th with a try to veteran scrumhalf Will Genia — the 15th of his test career — which came after a series of collapsed scrums five meters from the All Blacks line.

New Zealand struck again, through Barrett and from long range, immediately before halftime. Australia was hot on attack when a handling error by center Kurtley Beale turned over possession and Jordie Barrett launched a 90 meter counter-attack, finished by his brother.

The All Blacks then all but put the game out of Australia's reach with tries to prop Joe Moody and flanker Liam Squire in the 43rd and 47th minutes. Jordie Barrett came close to scoring in the 51st but was denied by a brilliant tackle in the corner by Wallabies flyhalf Bernard Foley.

Foley then made an incisive break to create a try for center Reece Hodge that cut New Zealand's lead to 28-12. But the rally was short-lived, snuffed out by Barrett's third try which came when he sold a dummy just inside the All Blacks' half and pierced two tackles to score.

His next try-scoring attempt was canceled out by the TMO, who ruled a knock-on, but he quickly scored again from a turnover by Retallick and strong runs from Damian McKenzie and Anton Lienert-Brown. In doing so Barrett became the first All Black to score four tries in a test against Australia.

The Wallabies did their best to remain positive after a 0-2 start to the Rugby Championship. 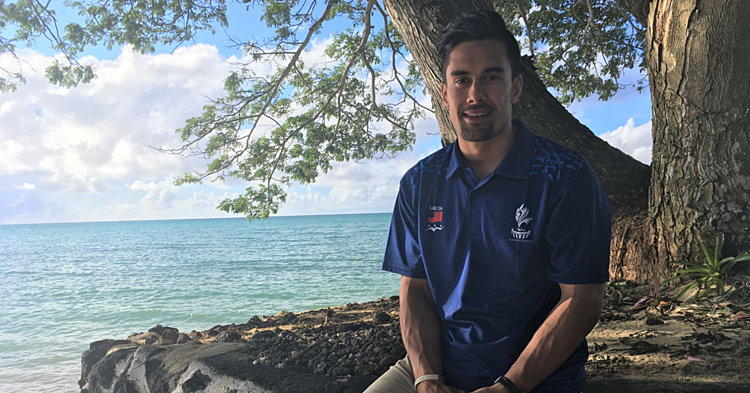 Eroni Leilua can't train out on the water under New Zealand's COVID-19 restrictions, so is keeping fit at home while he waits for the 2021 Games in Tokyo.