His Samoan language songwriting commands fees of up to USD$1,500 per tune.

But the 34-year-old Aumua insists that his greatest ability is selling hand-painted ie lavalava (Samoan wraparounds) anywhere in the world.

“I also do carvings and I was even a tattooist at one point but I never thought about music or singing. What I always say is that I am no musician. I keep it humble with my music.”

When he was a Disc Jockey for Talofa FM Radio, Aumua noticed that Samoan listeners loved Samoan songs that had a funny twist.

He started writing songs and coming up with lyrics and beats in 2015.

“I don’t play any instruments, no piano or guitar but before I started singing, I used to write songs for my singer friends. And when I gave them a song I also gave them a beat,” Aumua said.

His first song was “Tago Lima Lua,” that pokes fun at infidelity. Produced by Dr. Rome Productions, it is available on YouTube. 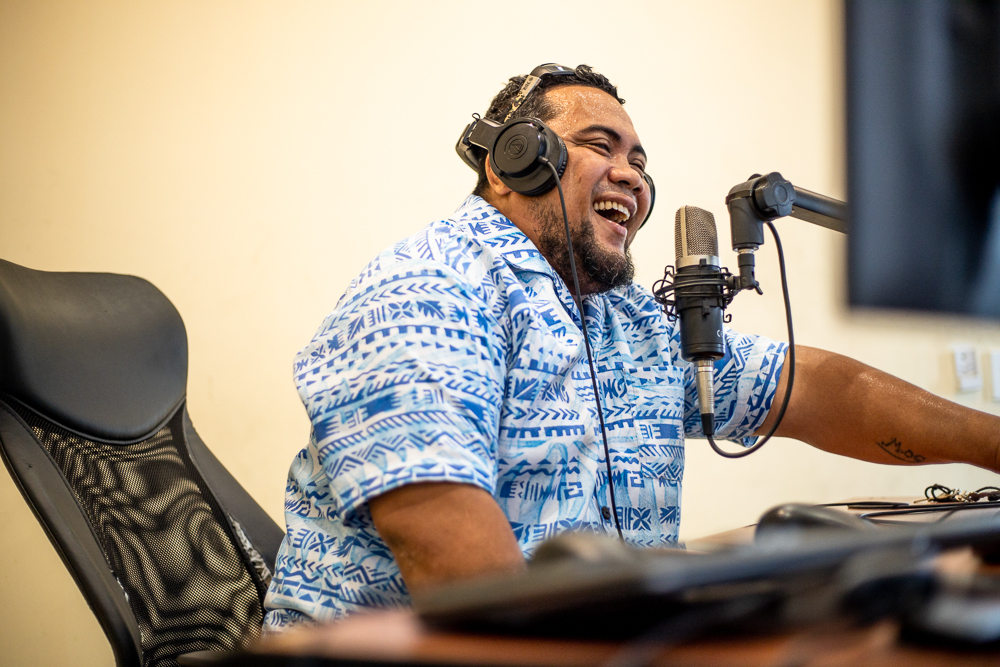 “Samoans like funny songs. When I worked at Talofa FM that is when I discovered what kind of music people like. That is where I got my style from and that is the style I push. I like to keep my music funny,” Aumua said.

His lyrics come through a process that he describes as an “anointing”; most often it occurs when Aumua is in the shower.

“The beats and songs they come to me unexpectedly. I will go in the shower and a song will come to mind and the words come with a beat. Then I call my wife to bring the phone so I can record it. The only tool I have for making songs is my phone,” he said.

“When I am taking a shower when I am done with my chores, it is like the water hits my head and I am refreshed. It’s like an anointing I feel, a beat will come to mind and so do the lyrics.

“It doesn’t matter if I am in the shower and I am wet; I get the phone and I record my voice. If I don’t record it, it makes me sick because it will keep nagging at me.”

Aumua says he is always focused on building his business ventures. He is either working his day job at the radio station, designing or selling elei (fabric prints), shipping off his ie lavalava, writing songs for a fee or selling cabbage and bananas in front of Frankie’s in Vaitele.

“I never rest. My break is designing elei. One of my biggest elei customers is Janet’s. I provide them with the design cuttings and they do the painting. What I create for them, I don’t sell to other customers, I create them special designs,” he said.

His wife, Oli Gibson Aumua, and their daughters, Aveauna and Olita, live in Malie. His wife shares many of the same passions as her husband; she plays the piano and sews.

Tapu says that together they make for a perfect team. He designs and paints the fabric cuts, while Oli sews them together to make clothes. They are planning to open a sewing shop in Vaitele.

Together they are offering a wedding package for couples, which is composed of clothing for the groomsmen and bridesmaids and entertainment for the wedding party with Shorty Kap as an M.C., singer and even on the decks as a D.J.

Prior to meeting the Samoa Observer interview, Tapu had just made a stop at FedEx to send off a shipment of ie lavalava to Queensland, Australia. Next week he will send another consignment along with men’s dress shirts to American Samoa. Each week, Tapu is shipping off elei merchandise.

He is passionate about developing his talents to make a living, hard work, his children and the Samoan language. 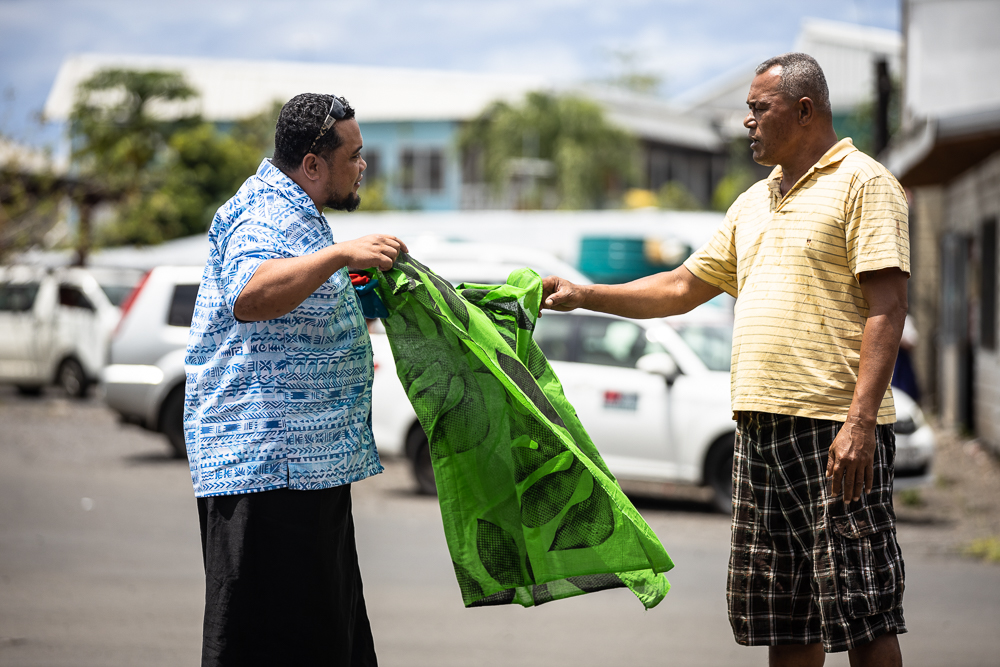 “My advice for others, especially for young fathers, especially the ones who say you are poor, my advice is whatever bit of talent God has given to you – use it. You don’t wait for the Lord to come and do everything for you,” said Tapu.

“Whatever it is that bit of talent that God has given you, take it and move, develop it. When God sees that you are moving then God will bless you because you are moving.”

He urges young people to use their talents, choose the right friends and to remain humble.

“I used to be a show-off but I want to tell the young men, don’t be a show-off and don’t waste time starting fights in the town area,” he said.

“Do what brings honour to your family. I used to be a show-off in my younger days but today you get nothing out of it..

Recently, he composed two Samoan language songs for USD$1,500 each for the campaign of Nua Sao & Tapumanaia Galu Satele Jr., who are running in American Samoa’s Gubernatorial elections.

“They (Nua and Satele) also wanted to include culture so I included that too. I am big on our culture and language. We have to keep our language alive; we have to use our language. I have always topped my Samoan classes in school and I am strong on Samoan language,” Tapu said.

But he has no plans of slowing down despite the challenges faced across this year. In 2021, he plans to publish his first book of art and poetry.

“If I don’t move my kids won’t eat they will have no milk or diapers. Last night I went to sleep at 3am and just before this, I went and sent a shipment of ie lavalava through FedEx,” Tapu said.

“I do sing now but I am no singer really. I want to say thank you to my wife for her support, my family, my parents, my wife's family, my friends and Dr. Rome Productions for their support:”

A man accused of stabbing his younger brother on the back with a kitchen knife has been denied bail because of his previous convictions. It means Janu Junior Masoe, of Ma’agao and Nofoali'i, will be spending Christmas and New Year’s at the Tanumalala Prison.

Every day is a gift. And what better way to spend it than working the land. This is exactly what Tuliatu Mamaioa from the village of Faletagaloa, Safune was doing yesterday when he was spotted by the Samoa Observer.