The students at the Samoa Observer printing plant at Vaitele. (Photo: Vaitogi A. Matafeo) 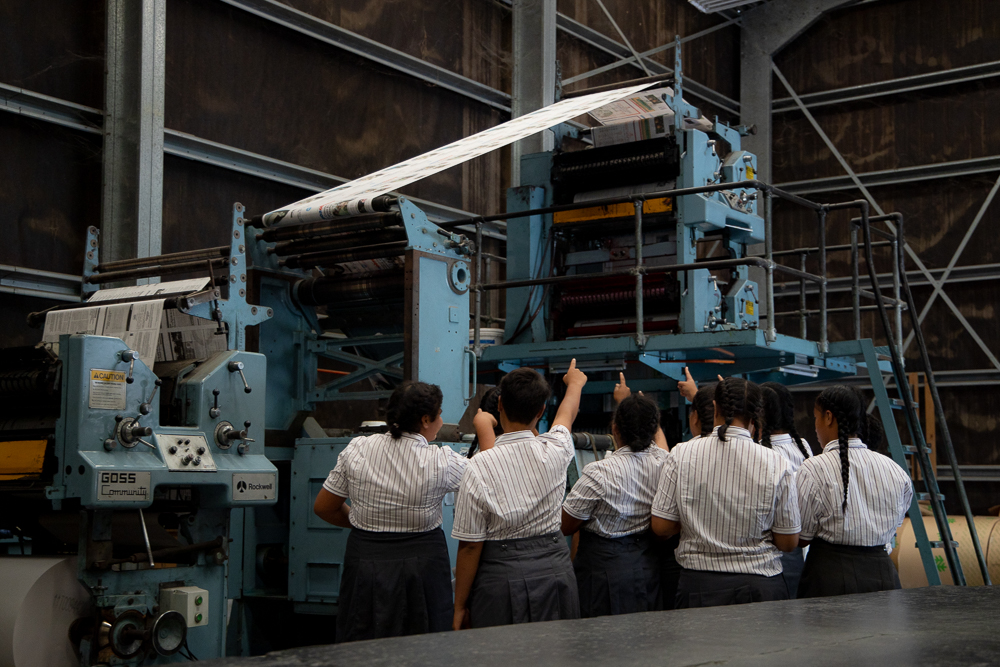 Mata'afa encouraged the students to dream big and shared with them the story of how the Samoa Observer's Editor-in-Chief, Gatoaitele Savea Sano Malifa, started the newspaper with a typewriter and in a cookhouse.

From such humble beginnings, the newspaper started in 1978, has grown to become the nation's only daily.

Mata'afa explained that while journalists are often the faces of a media outlet, and that journalism training is advantage, there are many roles behind the scenes required to make a good newspaper. He spoke about Sales and Marketing, Printing, Online and as well as Graphics.

Siliniu said that the main reason behind the visit was for the girls to get to know what and how a newspaper company operates. She said many of the girls want to be journalists in the future, hence why they were eager to visit the newspaper headquarters.

“I think that the role of the media is very significant in informing members of the public,” Siliniu said.

She added that some of the victims or survivors of sexual or physical abuse want to use the media platform as a way of telling their stories or what they went through.

“These girls sometimes when they have experienced what they went through, they become hopeless or do not have a reason to live for.

“That’s why we are trying to give them ideas, options and ways they can try to see a bright future ahead with different career paths.”

She also acknowledged the Samoa Observer for giving them an opportunity to visit and have a sense of the work the newspaper does daily.

“My hope is that with the knowledge that these girls have learnt, they can use it to be passionate about their future decisions.”

Broadcasters at the state-owned Radio 2AP have completed joint training with Samoa Victims Supoport Group (S.V.S.G.) to equip themselves with the skills to work with survivors of domestic and sexual violence abuse.