That's according to General Manager and coral grower, Rick Namulo.

Though flooding and sediment have had their way with some of the hundreds of coral pieces strapped to the planting structure in the past year, at least 40 per cent has survived and is growing well.

“You can see after only a month of being in the water, you can start to see the coral attaching itself to the cement discs, they are surprisingly fast at growing,” he said.

He learned how to plant coral from Reef Explorers Fiji. And with the help of the “hidden talents” among the staff at the resort, the team was able to put together metal racks to install in the water, before finding planting material from the reef.

“We are fortunate to have a lagoon here where the water temperature is significantly warmer, so the idea is we take corals that are used to being in warmer water and then transplant them into cooler water where they should thrive.

“It’s the increase in sea temperature that causes coral bleaching, so if we take tolerant coral and move them out to cooler areas, when the sea temperature does rise they should be able to thrive.” 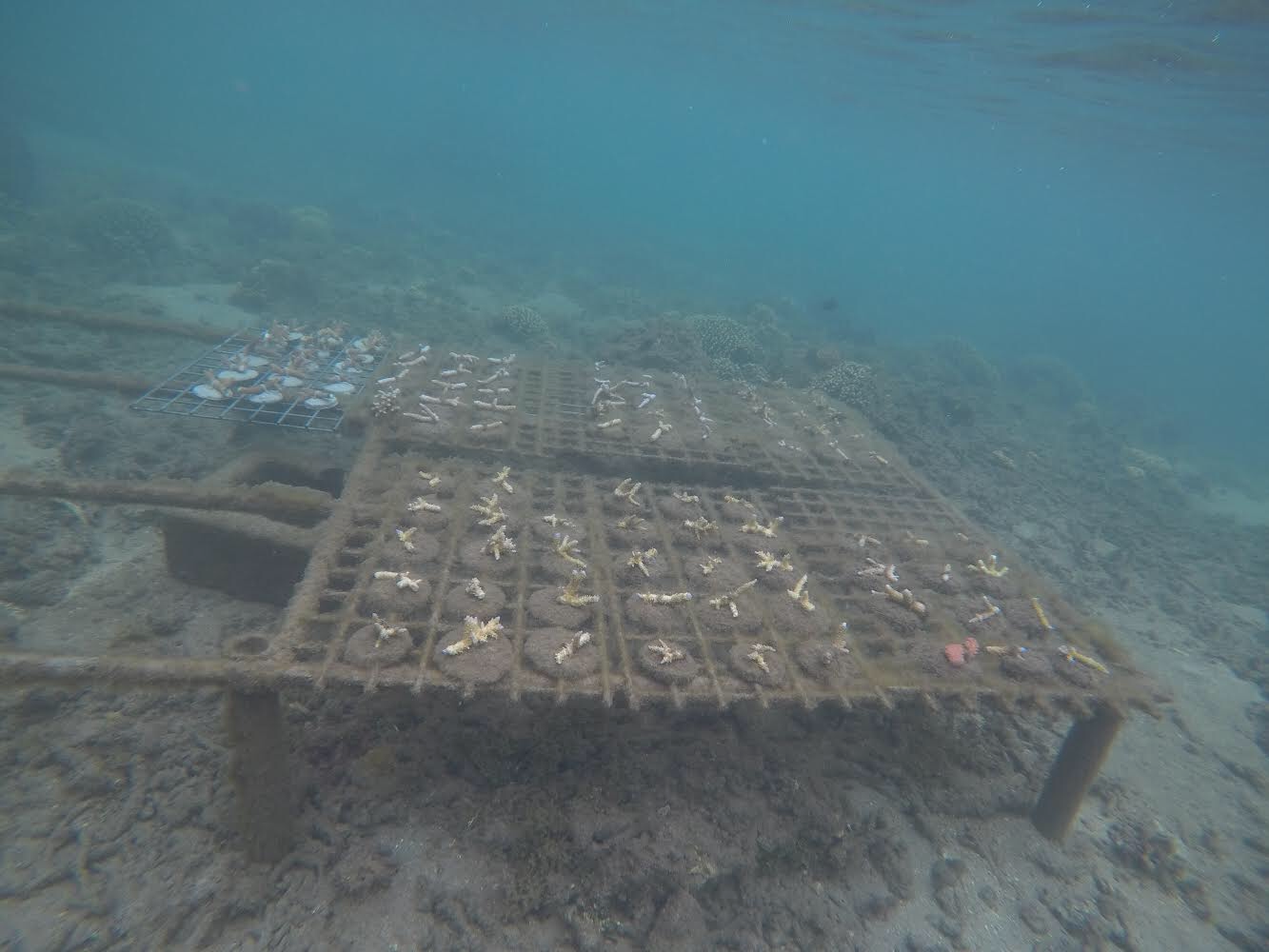 The lagoon is sheltered so large waves do not damage the racks fastened to the seabed, as can be an issue for coral replanting projects.

But the team has come up against a slightly unexpected problem, causing a 60 percent loss of the more than 100 corals planted.

“When there is heavy rain there are waterfalls that cause flash flooding that goes onto the reef,” Mr. Namulo explained.

“So where the rack is currently is in an area where there is a lot of sediment that comes into the water for about a week before it naturally flushes out, and that is a big problem. We had two or three months of bad weather out here and the reef was the colour of coffee.

“Based off this we are going to be moving the rack to somewhere further away from any kind of water runoff from the land.”

But the survivors hold a lot of promise.

“The ones that did survive are clearly strong and resilient. Though we have ended up with fewer, we know they are very strong to the heat,” Mr. Namulo said.

Mr. Namulo and his wife Leonyra Meredith Namulo have been running Aga Reef together since returning from their home in Fiji to take over Ms. Namulo’s parent’s business. Before Aga Reef, Mr. Namulo was in the I.T. business for 20 years.

“We are both really interested in the sea, we love the ocean, and it just made sense where the Reef is part of our name so we have got to do something to look after it,” he said.

Lyla Tapusoa, Ms. Namulo’s cousin, spent her summer university break at the resort, in the water every day, securing the metal rack into the seabed and attaching pieces of coral to it.

“She did a lot of the hard legwork, it’s actually quite labour intensive,” Mr. Namulo said.

The marine science student is in her fourth year studying at the University of Auckland. She said she hopes to continue working with coral in the future, and had planned to return to Samoa for more restoration work sooner but the COVID-19 pandemic altered her plans.

“I would just love to do this forever,” she said.

“The rate of coral bleaching due to global warming is really scary and I am really determined to get out there and do the work.

“I am scared for our coral reefs because our villages get their fish from the reefs. If the coral reefs die out, our reef fish will have no home and one of our main sources of food on the island will be scarce.

“Hopefully we move into the direction of a sustainable future we can survive for longer.”

Mr. Namulo and the resort team hope that when borders reopen, the coral nursery will be favourite activity for tourists, and even foster some long-term friendships with guests wanting to return and check up on their handiwork.

“We did this one rack as a trial, and I think we have managed to prove it is achievable and had a number of learnings.

“But the goal was always to get involved, and the guests that have helped out really loved it.

“Once we get overseas guests involved in a project like this they will have a tie to come back to Samoa because they have helped established coral on a reef.”

But even as Samoa remains firmly closed to the outside, local guests have already participated in the replanting efforts, including a team from the Secretariat of the Pacific Regional Environment Programme who spent White Sunday weekend holidaying there.

Deputy Director-General Roger Cornforth told the Samoa Observer that as a group of committed environmentalists they had a lot of fun helping the planting efforts.

“It was pretty rough trying to stay in place and do the work, it was a bit of a challenge. But we come from an organisation that is focused on the resilience of our environment so we are all people who have a natural commitment to doing what we can do improve things on the ground,” he said.

The group helped relocate some of the coral growing on the nursery onto the reef. Mr. Cornforth said as individuals with a background in the climate change disaster affecting the coral reef systems, they were happy to support the Aga Reef initiative.

He said dealing with climate change has to be both large scale, and grassroots initiatives. While large carbon-emitting countries must reduce their output to halt global warming, ecosystems like reefs are on the brink of survival.

“Current pressures, globally and locally, will push 90 per cent coral reefs to threatened status by 2030 and that nearly all reefs will be threatened by 2050.

“These initiatives are important.”

In the 1990s, Mr. Cornforth spent six years living in Samoa before returning for his current stint. He said the coral near Aga Reef reminds him of how the whole of Aleipata used to look before two major cyclones and the 2009 tsunami caused such devastation.

“To see the recovery and the potential for the growth is really quite exciting. Every little bit helps and this is certainly helping.

“We should be seeing more of this and I guess as those activities are monitored we can also learn a lot. I hope that M.N.R.E. and other interested parties are following these initiatives because around the world, we are finding coral response to bleaching and water warming and acidification are not uniform.

“Overall every move we make to build resilience in our reefs is important.”

As well as contending with the global warming issues in the ocean, problems on land play their part too. Pollution and runoff that harms the reef, as it did to the first lot of coral planted by Mr. Namulo and Ms. Tapusoa, need to be contained too.

“When you see brown algae all furry growing over everything, you know things are not healthy.”

Mr. Cornforth encouraged any other organisation or resort looking to try their hands at coral restoration to contact S.P.R.E.P., which can help with resources and expertise to ensure the project has every chance at success.

While there are no official coral projects ongoing, the organisation is looking to connect with funding to address coastal resilience and ecosystem based management, of which coral restoration is a part.