Eileen Williams of the Faculty of Science argues her point (Photo: Vaitogi A. Matafeo)
HS
By Hyunsook Siutaia, 23/10/2020

The debate is a six-week event that also pits the N.U.S. students against peers from other university faculties including Technical, Vocational and Education Training [T.V.E.T.].

The topic for the final round was “free WiFi for all schools” with the S.O.M. affirmative and the T.V.E.T. negative. Observers say it was a tough final round but the medical students grinded their way to victory to come out the best team.

The final debate round on Thursday was chaired by the N.U.S. Literacy Officer, Luagalau Foisaga Shon with the Vice Chancellor, Professor Alec Ekeroma as well as University of South Pacific [U.S.P.] Alafua Campus students in attendance.

Professor Ekeroma said the annual debate contest is an initiative that can foster the growth of the country’s future leaders, and there has been a marked improvement in the students' public speaking skills since the debate competition started. 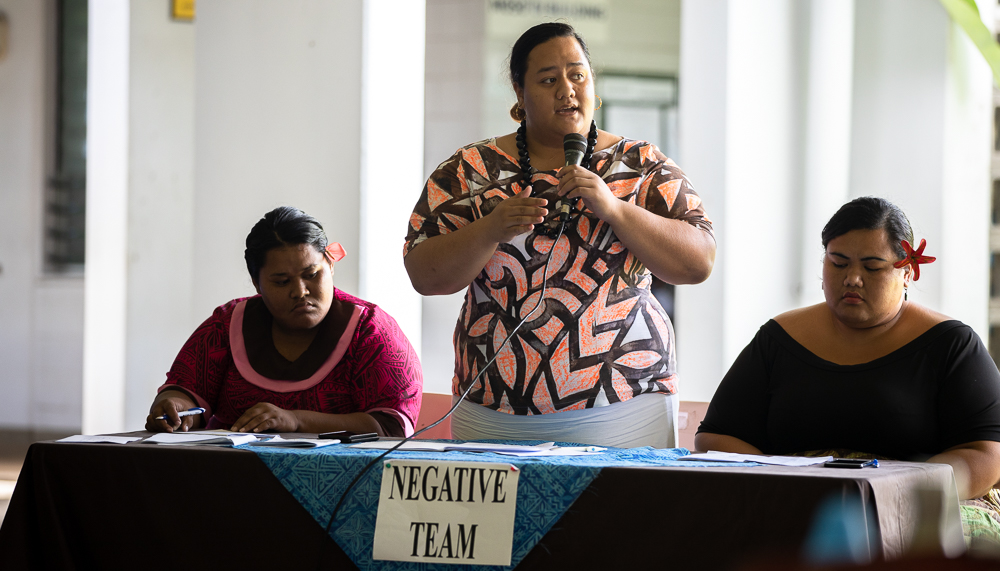 “I think it’s a fantastic opportunity for students to engage in debates to build their capacities and argumentation in debates, gathering all the evidence and then doing the analysis and developing skills in presentation with how the language is used,” he said.

The Vice Chancellor added that some of the debate sessions he listened to were humorous, but very informative and is an essential skill to groom the future leaders of the country.

This year’s competition was a first for the university as it was streamed live throughout the six weeks of the competition through the N.U.S. Facebook Page.