A look at the Vaisigano bridge along the beach road which should also be decorated as part of the Christmas Festival Lights (Photo: Aufa'i Areta Areta)

Amid the coronavirus-led economic downturn, widespread business closures and unemployment, the Cabinet has issued an edict to its Ministries to limit their spending on this year's Christmas Lights Festival to $10,000.

The limits on Samoa's 13 Ministries are confirmed in a Cabinet Directive obtained by the Samoa Observer that is signed by Secretary of Cabinet and Chief Executive Officer, Ministry of Prime Minister and Cabinet, Agafili Shem Leo.

There are a total of 13 government ministries not including state-owned enterprises, suggesting total spending on the light show across Government must not exceed $130,000 following the issuing of the directive.

Dated 7 October 2020, the Cabinet Directive says all Government offices will be decorated with light and the Electricity Power Corporation will be in charge of lights on the main road.

The lights will be centered mainly on the Apia City Boulevard, Apia Waterfront, and the Friendship Park.

According to the Cabinet Directive that is addressed to all the Chief Executive Officers for Ministries and Agencies, this matter was discussed in Parliament on 30 September, 2020 and they had endorsed the Christmas Lights Festival from the 11-25 December, 2020. 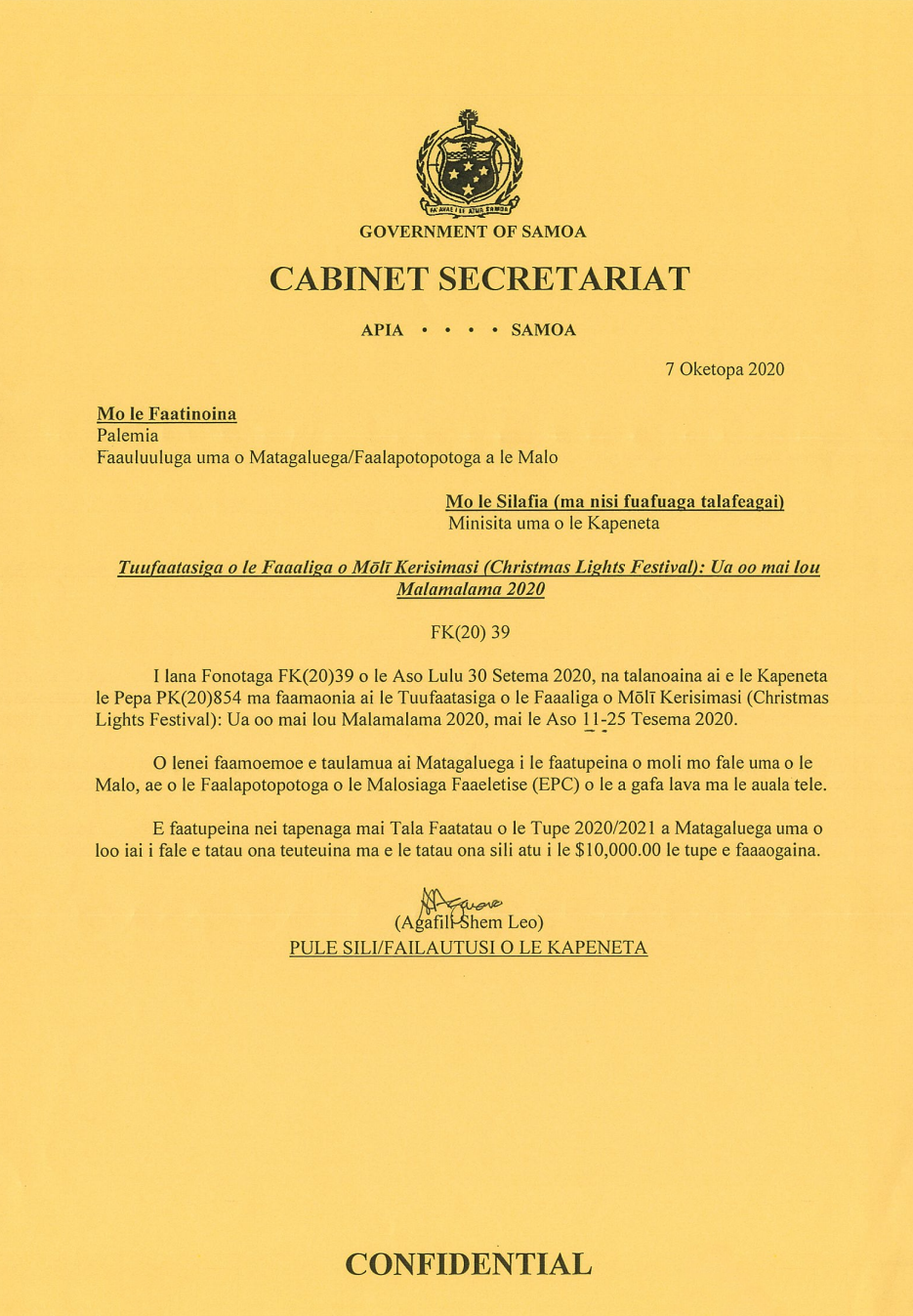 “The funding for these efforts comes from the budget for Financial Year 2020-2021 and that each Ministry that has buildings should be decorated can spend up to $10,000," the confidential Cabinet document says.

Efforts to get comments from the Chairman for the Christmas Lights Festival Task Force, Fa’amatuainu Suifua Fa’amatuainu, who is also the C.E.O. for the Samoa Tourism Authority, were not successful as of press time.

The concept note for the Christmas Festival lights will encourage families and businesses to decorate their houses, offices, residents with Christmas lights starting the week before Christmas as usual.

The major attraction will be held at the Friendship Park, Apia City Boulevard and the Apia Waterfront, where different activities will be running throughout the week.

The Festival of Lights will help to restore the joyous spirit of Christmas despite the challenges Samoa encountered in 2019 due to the measles outbreak, and the unprecedented impacts of the COVID 19 pandemic the world continues to grapple with to date.

The proposed event is premised on the notion that beyond the clouds, the sun still shines; and despite the storms, light when given a glimpse of hope, will penetrate and diffuse darkness.

But the news of Government spending on festivities comes as the Samoan economy faces a massive decline in revenue and employment due the coronavirus-led economic downturn that has ground the country's tourism industry to a halt.

The news comes amid reports that the influx of aid by foreign donors to Samoa nearly doubled in 2018 and that the nation's Gross Domestic Product (G.D.P.) contracted by 11.6 per cent for the second quarter of 2020 on a yearly basis.

During the delivery of the nation's budget this year the Government recorded a deficit of between $82 to $116 million, depending on the accounting definitions used.

The Minister of Finance, Sili Epa Tuioti, said the overall Total Revenues of Government are forecast to drop 5 per cent or $42.7 million in the new fiscal year.

Government debt currently stands at $1.01 billion, according to the latest figures.