Rising rates of students dropping out of school drove the Government's recently announced overhaul of the education system, condensing college from five years into four, a Government document reveals.

The Government announced this July it would be removing the current final year of college, Year 13, in favour of a new system of having secondary schools last from years 9 to 12. The changes will officially commence in 2021.

In the last five years, a growing number of students have dropped out of Year 11 and Year 13, the Government has found. It believes the trend is being caused by the introduction of specialist learning material too late in students' educational careers.

The majority of students leaving the system early are young males.

The reasons for the Government’s reform is contained within a brochure distributed during a meeting of secondary school Principals from around Samoa facilitated by the Ministry of Education, Sports and Culture (M.E.S.C.) last week.

“The rationale for [the] change to a four-year level is that dropout rates starting from year 9, 10, 11, 12 and especially year 13 [in the last] five years [have] increased,” the document reads.

In July it was announced that all schools in Samoa would dissolve their Year 13 classes following changes passed by Cabinet to condense secondary school education into four levels.

The new system of having secondary schools run from Years 9 to 12 will begin next year.

According to the M.E.S.C. brochure, student achievement is forecast to its decline.

The decline in student performance is attributed to the distribution of assessment modules and learning material being focused in the final two years of the existing education system and not earlier.

“The split for specialised subjects happens two years before the last year of learning,” the brochure reads.

“[This is] introduced too late; research confirms it takes three to four years for a student to gain confidence in a learning pathway. 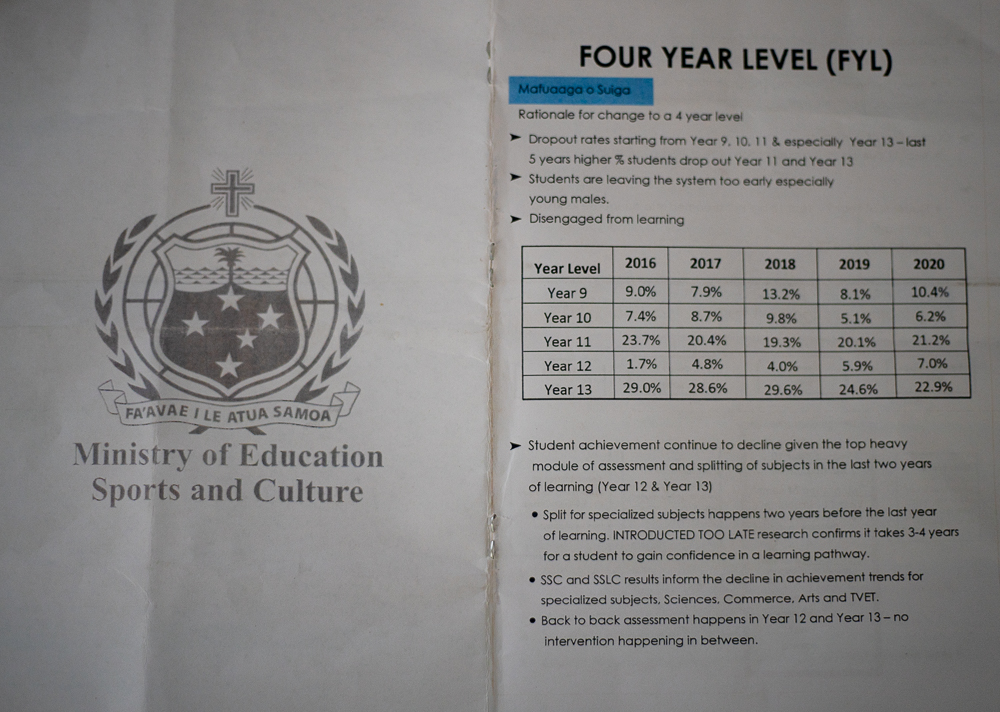 The Ministry says that back-to-back assessments in Year 12 and Year 13 do not allow for interventions to improve student performance in-between.

According to the M.E.S.C. Year 9 to Year 13 students are not adequately streamed, the impact of which is seen at the University Preparatory Year or Foundation Year.

“Core subjects ([such as] Maths and English, Samoan) [are] not contextualised to meet the content needs of Arts, Commerce, [(Technical and Vocational Education and Training], and Science students and there is a need to stream English and Maths and Samoan so [they are] compulsory,” the document reads.

In July during the first meeting with the Ministry and school leaders, the Principal of Leififi College, Sifuiva Malaea Lauano, said that implementing the new system would require effort from students, teachers and parents to succeed.

“I think new changes are good for us because it gives a chance to try and see how we can improve in various areas,” she said.

She noted that under the new system, a secondary school student’s educational journey will be condensed into four years,

“I think this new programme will help students because one of the challenges they face is that when they look at the lifespan of five years, it seems long,” she said.

“But the first year which is Year 9, it seems that they have the mentality of not putting any priority and significance placed on it.

“There is no real focus at the beginning of his secondary-level journey.”

The Leififi College Principal, who looks after more than 500 students, also agrees that, by Year 9, a child should already decide which career pathway to take so they can choose the relevant subjects.

“It will make it easier as they progress further,” she said.

“I also advise our teachers and parents that we must take [on] this new challenge in a positive way so we can try and help the children of Samoa improve their learning capabilities.”