Samoa is ready to send workers to New Zealand and Australia as soon as they are asked for, the Ministry of Commerce, Industry and Labour has indicated.

Assistant Chief Executive Officer, Lemalu Nele Leilua, said the Prime Minister and Cabinet have said they are eager to see some of the nearly 3000 workers waiting to be deployed get to gainful employment overseas.

Lemalu, the head of the Labour Employment and Export Programme, hopes a group of workers will be headed off, most likely to Australia, before Christmas.

“We would like to see them go right now, starting next week,” she said.

“I feel for them and their families. I get calls from them, asking when are we going back.

“I think very soon we will get workers going back to Australia, hopefully our first flight will be done before Christmas.”

Currently around 2000 Samoans make up a “work-ready pool,” which is people who have applied to leave and passed the screening process. Around 1400 of them are men, and of the remainder 400 are women hoping to do aged-care or caregiving work.

Some have requested to go into carpentry and meat works as well as the more traditional fruit picking and pruning work.

On top of that group are around 1100 returned seasonal workers from New Zealand who, having finally made it home from the last season, would like to go back for another one.

Barely 70 out of around 600 workers based in Australia have been repatriated home since the borders closed, with the remainder on new contracts waiting the border closures out.

Lemalu said the New Zealand Government has not officially asked for workers yet, but industry representatives have written to M.C.I.L. pleading for help.

“That shows they are so desperate for workers, but there are proper channels… I think some of the employers should know better.”

The A.C.E.O. said she directed them to the proper channels.

“We have received a request from someone who is acting on behalf of other employers who wanted to bring over 100 R.S.E. workers but we advised them this is the process you need to do.

“You need to go back to the Ministry of Business, Innovation and Employment because they are the ones responsible for giving out A.T.R.s (approval to recruit), you need to get that and talk to them.

“We cannot just go ahead and send workers, we need to get A.T.R.s,” Lemalu said. 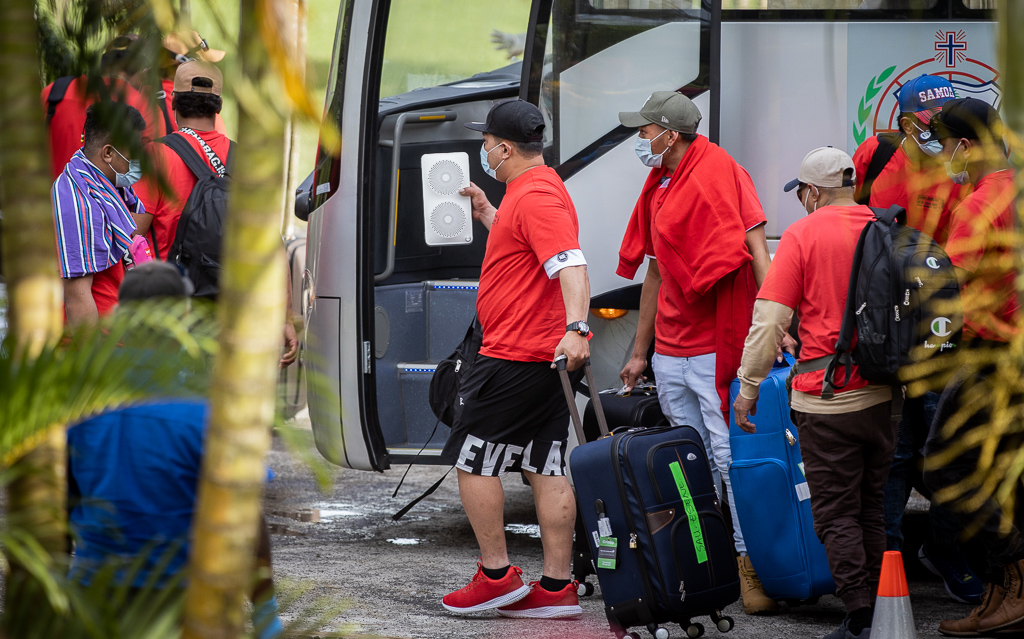 Meanwhile Australian Ministers Marise Payne and Alex Hawke have written to M.C.I.L. asking if Samoa is eager to restart participation in the Labour Mobility Scheme, to which Lemalu said the Government replied with a resounding yes.

“They sent a request whether Samoa would like to opt in for restarting of the Labour Mobility Programme,” Lemalu said.

“We replied to them that yes, Samoa is interested, and now four countries have opted in.”

Now they have to wait for approved employers to write to Samoa asking for a number of workers.

Lemalu is hoping that employers across different states can coordinate together to get workers from Samoa and maybe neighbouring Tonga on a chartered flight that not only collects workers from the islands, but also repatriates any citizens in Australia hoping to get home.

“Employers really need to get themselves together if they really want workers to be recruited from Samoa and other Pacific Island countries, they need a plan,” Lemalu said.

She also wants their contracts synchronised with those of the workers who stayed in Australia from the 2019 to 2020 season so that they might all be able to come home at once when the time comes.

Most employers have offered to host workers for their fortnight of quarantine on site on the orchards, and Lemalu said the Samoan Government is happy with that offer.

New Zealand and Australia have not indicated yet how they feel, thought with Samoa’s COVID-19 free status Lemalu said she hopes Samoan workers will skip quarantine altogether.

“At the end of the day it’s an Australia and New Zealand government decision whether they can accept that when they arrive they go directly to their accommodation and be quarantined there.

“Given the fact that Samoa is COVID-19 free I have no idea why they don’t accept workers from Samoa to come over and cut out the quarantine phase and go directly to work.”

Australia, eager to fill its orchards with the pool of seasonal workers it is used to having, has successfully flown two groups of people from Vanuatu over to work in Darwin mango orchards.

Lemalu said Australia did not leave much time to decide whether to opt into the programme, so while Samoa was weighing up its options Vanuatu got the spot.

But New Zealand has kept its cards closer to its chest, she says.

“Australia are ready to roll, it’s just how to go about it in terms of flights.

“We should be getting requests from employers right now. I would have thought that Australia, since they have huge demand for workers, that they would get the ball rolling. We told them we are ready, we have people ready.

“So they should get the ball rolling and ask airlines to bring our workers back to Australia.”

Asked whether she feels the COVID-19 situations in Australia or New Zealand are safe enough for workers to travel, Lemalu said the Ministry is entertaining have workers sign a waiver if they want to travel for work.

No one will be forced to travel, but there are thousands clamouring to get out. So if they understand the risks, she said, that is their choice.

“But given the fact that no worker came back having contracted the virus, it’s safe for them.”

As for who of the nearly 3000 hopeful workers who want to travel will get picked for the first deployments, Lemalu said the absolutely best will go, so to protect Samoa’s reputation as it re-enters the seasonal work programmes.

“We have to be careful and get the more disciplined ones, not the cheekiest ones, at this time of the COVID-19.

“Just to make sure the programme is not hindered by their behaviours and things like that.”

In normal times, Samoa would be able to quickly return workers who misbehaved or broke rules while on seasonal work, but with limited flights and capacity to quarantine citizens here in Samoa, that option is not as convenient.

But that has not stopped Lemalu from recalling workers in the last six months, including some who had extra-marital affairs while in New Zealand.