The Prime Minister said that he reads the newspaper but regularly “throws it away to save [his] brain” when encountering an article he dislikes.
Politics
TM
By Tina Mata'afa-Tufele, 14/10/2020 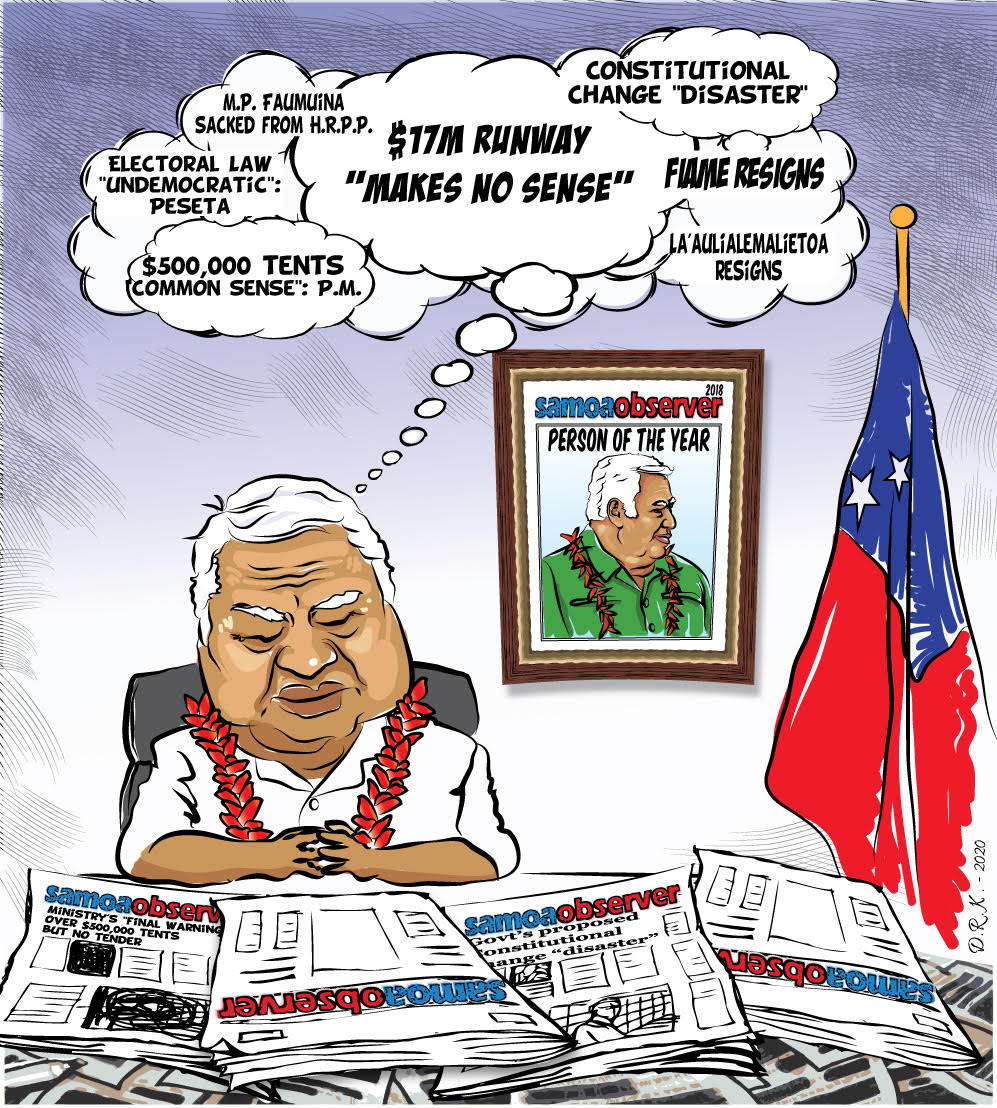 The Prime Minister, Tuilaepa Dr. Sailele Malielegaoi, has revealed he has a “love-hate” relationship with the Samoa Observer.

The Prime Minister said that he reads the newspaper but regularly “throws it away to save [his] brain” when encountering an article he dislikes.

The Prime Minister spoke exclusively to the Samoa Observer at an election strategy summit at the Human Rights Protection Party (H.R.P.P.) headquarters in Mulinu'u last Friday.

The Prime Minister has been highly critical of this newspaper for a long time but recently has increased the frequency of his criticism, made through state-owned media outlets.

Last month alone he said this newspaper had used “tricks” in an attempt to topple his Government; said the newspaper was looking “thin”; and suggested the newspaper hire “intelligent reporters”.

But on Friday Tuilaepa, speaking on the sidelines of the election strategy summit, struck a more jovial tone about those recent comments.

“I was pulling your leg all the time,” he said with a hearty laugh.

But the Prime Minister, whose Press Secretary often declines to answer questions from this newspaper, accused the Observer of including fake comments that seek to “ridicule” his administration and its officials.

“Your newspaper, it should be the best but there is a trend with you,” said Tuilaepa.

“The thing [report] will come but you always add in comments to ruin what we are doing. That is why I haven’t answered at times.

“The thing is: there will always be something to ridicule what we are working on. That is the trend I see with the Observer.”

When pressed to cite examples, the Prime Minister pointed to a past error he claimed was published in the newspaper.

Tuilaepa recalled “a year” when he was interviewed by an Observer reporter about a past U.S. President who took office “after [Bill] Clinton.”

When the story was published, he said the headline was incorrect.

“There was a year, it was not Trump, it was not Obama, it was the President after Clinton – his father was President and he became President. I was asked: ‘He (George Jr.) almost lost the election what do I think?’,” said Tuilaepa.

Tuilaepa said he made reference to George W. Bush’s 2000 election, in which the President narrowly lost the popular vote but won due to the United States’ electoral college system. (The election was ultimately decided in a Supreme Court case, Bush v. Gore).

“I said [to the reporter] that when someone loses an election, there is a big lesson learned and that he should do better,” Tuilaepa said.

“Then when the headline came in the paper, it said: ‘Tuilaepa is happy that his guy won’.”

The Prime Minister said he contacted the reporter and asked “Why did you do such a stupid thing?”

“And the reply from the reporter was he [filed] the [correct] story but the editor changed it,” he said.

“That kind of thing – there is nothing bad [happening] but the headline that comes it really casts a bad reflection. I like your newspaper but if I see something, an article that I don’t like, I don’t read it, I throw it away to save my brain.”