Researchers say that if there was COVID-19 outbreak in Samoa, it could look radically different from those experienced around the world, with possibly more cases in young people due to the measles crisis last year.

New research published in the B.M.C. Infectious Diseases Medical Journal models the potential impact of this widespread immune amnesia in Samoa on a hypothetical COVID-19 outbreak.

“The primary thing we wanted to show is that in a country where you had huge amounts of measles, it’s very likely that the spread [of COVID-19] will be a little bit different,” co-author and Ph.D. student Valentina Costantino told the Samoa Observer.

“In a place like Samoa with a young population with measles immune amnesia makes the younger age group more at risk. This could be a different scenario with an epidemic of more transmission in the younger population, unlike the rest of the world.”

The researchers, who are from The Biosecurity Program of the Kirby Institute, and the School of Public Health and Community Medicine in The University of New South Wales, found the measles epidemic could result in eight per cent more cases and two per cent more deaths than if the epidemic had not occurred.

Professor Chandini Raina MacIntyre and Ph.D. student Valentina Costantino are from the Biosecurity Program while Associate Professor David Heslop is from the School of Public Health.

The end result was eight per cent of Samoa’s under-15-year-olds being infected with measles, and many of the survivors endured severe health complications and invasive medical treatment.

In their research which began in January this year, the authors plot out a hypothetical COVID-19 outbreak in Samoa. They assume only 80 per cent of symptomatic infected people will be effectively isolated, and that only 60 per cent of known contacts of a case will be quarantined for 14 days on time.

They simulated their epidemic to run in Samoa for 400 days, and assumed children and adults would be equally effective at transmitting the virus to others.

They calculated that the 5,707 people who got measles and survived are 3.47 times more likely to get COVID-19.

“The first three age groups, 0–4, 5–9 and 10–14 are 1.44, 1.03 and 1.03 times more likely to get infected with COVID respectively,” the authors state, based on the overall increased susceptibility for each age group, between those who had measles and those who did not.

Overall it means an almost eight per cent increase in the total number of potential cases in Samoa, and an increase of 2.3 per cent in total deaths associated with a measles infection. 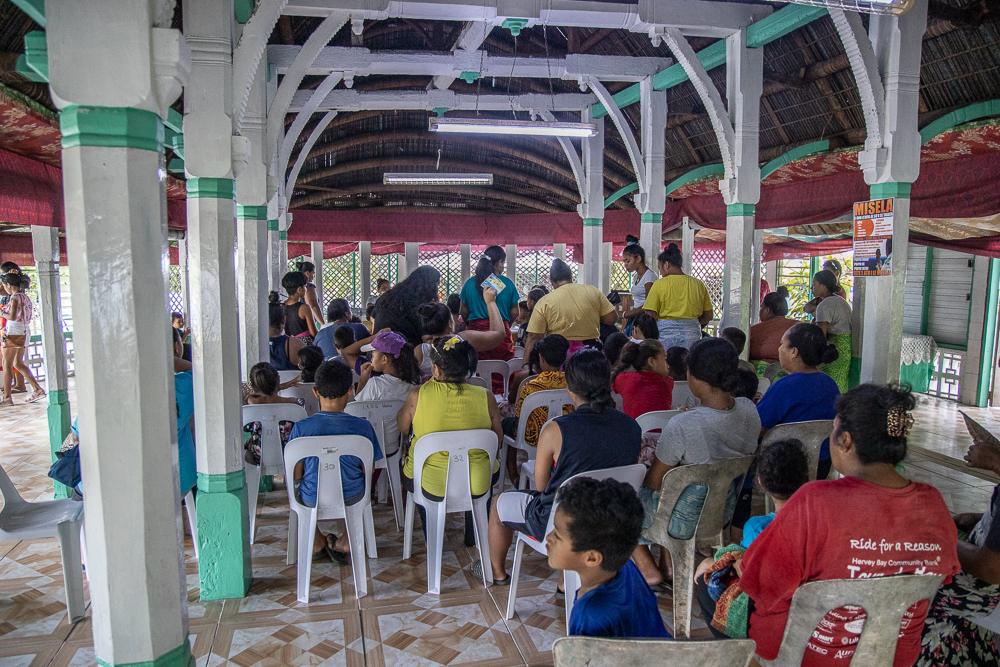 While much of the literature on COVID-19 developed since the pandemic began in late December 2019 has found older people more at risk of death and disease from the virus, children are susceptible and have died of COVID-19.

Children are also effective carriers and transmitters of the virus, more so even than adults, with one household study revealed the virus attack rates have been higher when their first case was a child.

“The effect of the severe measles epidemic may result in higher severity of disease in children in Samoa,” the authors write.

Children and young people would likely drive transmission of an outbreak in Samoa, and with highly mixed households this would mean all age groups at risk of disease.

“There is so much evidence now that it is not just about COVID-19 but about a lot of other diseases, like the measles infection causing immune paresis,” Ms. Costantino said.

“It’s just like a kind of immune disorder, it gives you a compromised immune system.”

High vaccine coverage could be meaningful protection against worse rates of COVID-19, she suggested.

COVID-19’s effect on children was not always clearly understood in the early months of the pandemic, and Ms. Costantino says the known parameters of the virus changed constantly.

“At the start we were supposing that children under 10 years of age were less infectious and spread the virus less, but then [we found] they are actually super spreaders so we had to change the parameters and modelling all over again.”

The authors say above and beyond closing the borders as Samoa has done, closing schools would be an effective disease control strategy for COVID-19, and encouraged face mask use where social distancing might be a challenge.

“COVID-19 looks like children are less susceptible. Yes there are a big amount of cases in young people but even the severity of the disease in children is not as high as in other age groups,” Ms. Costantino said.

“Having the amnesia from the measles outbreak could change this idea. We don’t know, it’s something we have to think about in this country without a health system like other places.

So while some have said closing schools is not a necessary control against the virus because of the low severity in children, it could be particularly effective here in Samoa, she said.

Last year the authors conducted a modelling exercise of disease outbreak in the Pacific based on smallpox bioterrorism.

The exercise resulted in a workshop between stakeholders where the researchers presented recommendations on how to guide improved prevention, mitigation and rapid response for a potential disease outbreak in the region.