Queries on the apparent absence of enforcement of social distancing rules during voter registration this week have gone unanswered by the Police and the National Emergency Operation Centre (N.E.O.C.).

Photos taken on Thursday and Friday showed people queuing up to register to vote standing much closer than the prescribed two-metre distance required under state of emergency regulations in full view of Police.

But no action was taken, despite the Police regularly intervening to enforce the regulations in other contexts including by shutting down private events, such as a recent fundraiser for the Saint Mary’s Old Girls Association.

Repeated questions and phone calls to the Police Commissioner, Fuiavailiili Egon Keil, and N.E.O.C. Chairman, Ulu Bismarck Crawley, were not responded to as of press time.

On Tuesday, Ulu dismissed claims that there was an “inconsistency” in state of emergency restrictions on the number of attendees at public and private events. 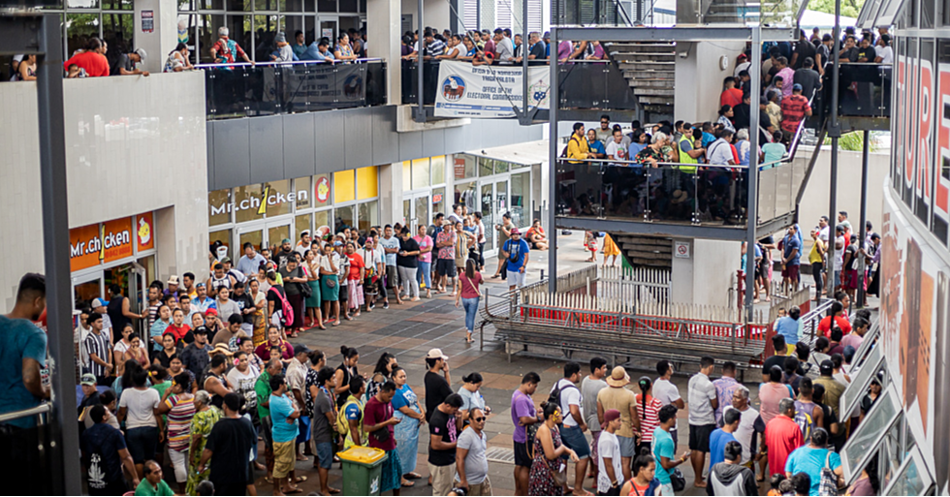 For two days straight, on Wednesday and Thursday, thousands of Samoans lined up at the Office of the Electoral Commission's door with no adherence to the social distancing rule.

Within the crowd were babies and members of the elderly.

On the last day of new voters' registration and switching of rolls for existing voters, there was mostly no space in between the crowd that had queued at the E.F.K.S. Hall in Mulinu'u.

As a result, many required emergency medical attention after passing out from standing in the tight space and heat for hours. The majority had stood in queues for more than 5 hours outside of the hall just to get into the building.

It was only when people had become injured from the doors of the building bursting due to the weight of the people pushing their way inside, that attracted a heavy presence of Police on Thursday.

However, the Police made no attempts at enforcing the two-metre social distancing requirements contained within the state of emergency regulations.

According to the regulations, a social distance of two meters is to be observed in all public gatherings including churches, schools, village council meetings, while the number of attendees are limited for title bestowments, weddings and funerals.

Recently, due to fears of repercussions, some churches had taken a proactive role in ensuring social distancing in Sunday services by dispersing their Sunday school students right after classes or moving them into the church halls.