Leighton Westerlund goes through a piece on his guitar at the school. (Photo: Francis Fa'alili)

The Pacific Creatives Foundation Samoa has celebrated its one-year anniversary with a recital performance by some of its students and certificate presentation.

The music school is located at Vaitele and was founded by Michael and Adi Tamanikaiyaroi in October last year.

Founder, Michael Tamanikaiyaroi, told the Samoa Observer that the event on Tuesday marks the school's first anniversary and is the first time the students have done a recital.

He said when they first opened their door last year, prior to the measle outbreak, they only had 10 registered students but their student numbers grew and now totals 40-plus.

“I would like to thank the parents for their support to the school,” he said.

Mr. Tamanikaiyaroi also thanked the parents for always bringing their children to the classes and learning about music.

He emphasised that the students learnt a lot in a short span of time and they will get better with more practice. 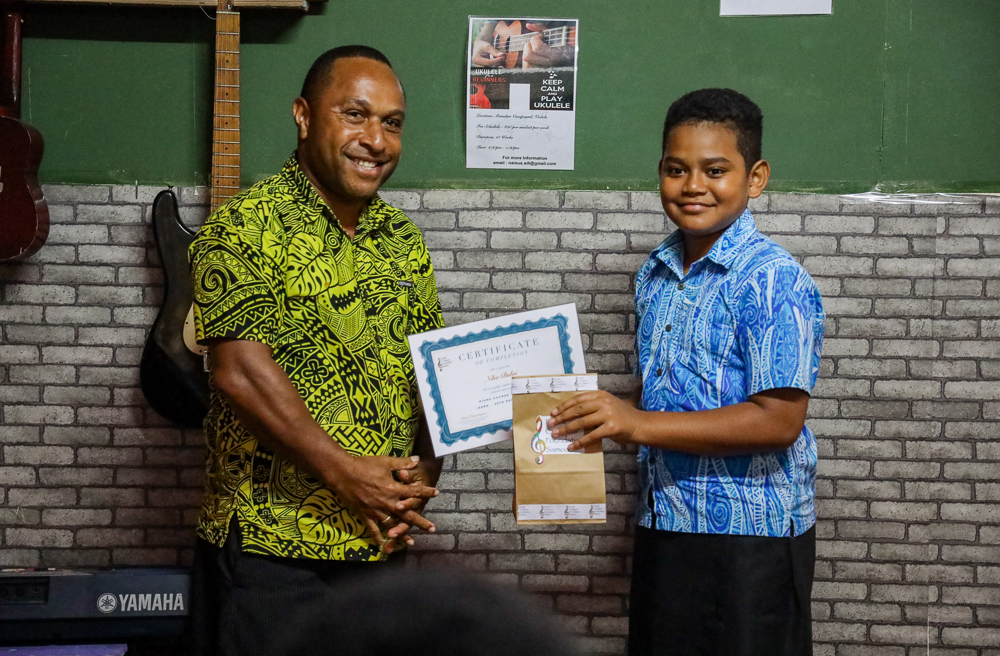 The students had 10 weeks of lessons and only two weeks to prepare for the recital, according to Mr. Tamanikaiyaroi.

Twelve-year-old Cleona Westerlund, who had completed piano courses at the Pacific Creatives Foundation Samoa, revealed that she learnt many things and would like to become a pianist in the future and compose songs.

Eleven-year-old Leighton Westerlund, who received a certificate for completing beginner and intermediate guitar lessons, told the Samoa Observer he was confident, brave and happy that he was playing the guitar during the recital.

Playing the country classic “Take me home, Country Road”, written by American singer and songwriter John Denver, he said he chose the song as it is one of his favourites and had dreamt of playing the guilty since he was five-years of age.

His mother, Measina Westerlund, told the Samoa Observer she is proud of Leighton completing the beginners and intermediate course Pacific Creatives Foundation Samoa.”

“We are both very proud and we will continue to bring him here for the next level of training,” she said.