Samoa’s contestants in a regional cooking reality television show say celebrating local ingredients was a highlight of their time on the Pacific Island Food Revolution.

The two teams on episode two of the second season, which was celebrated with a screening and dinner at Paddles Restaurant on Thursday evening, shared their experience with the Samoa Observer.

Aukusitino Suifaatau and his daughter, Teuila Aukusitino, who won the episode’s challenge as The Family Cooks, said they have been cooking together ever since Ms. Aukusitino was in high school.

Mr. Suifaatau, who is a cooking teacher at the Australia Pacific Training Coalition (A.P.T.C.), used to run the kitchen at Roko’s Restaurant when his eldest daughter was very young.

“After school I would go to Roko’s and wait for him, and when I got bored waiting I asked if I can help,” said the 21-year-old budding chef. “That is where I started. I remember when I was still a baby, my dad would carry me on his shoulders at work at Sinalei Reef Resort, that is where I started to love cooking – and eating, as well.”

Entering the reality television show was a chance to show off his creativity in the kitchen, something Mr. Suifaatau said he mostly gets to do at home for his family.

“I kept looking for a chance like this to express my own creations, and to show what I have taught my kids and my family at home,” he said.

Eventually, when all his children have jobs of their own (Ms. Aukusitino is the eldest of six children), the chef hopes to retire and focus on his plantation, and grow a larger variety of food to cook with.

Promoting a diet of less processed foods is a personal choice for the family, as Mr. Suafaatau’s wife Logotaeao has type two diabetes.

“That’s my number one task, to take care of her and my family’s diet,” he said.

“That’s my future career, I will stay home and take care of my land and put all those lovely ingredients on the table.”

Ms. Aukusitino said eating healthier has been a journey, and sometimes she still does like to enjoy dried instant noodles like so many other people in Samoa

“It’s not good for me, so if I eat it like that I am putting myself in danger.” 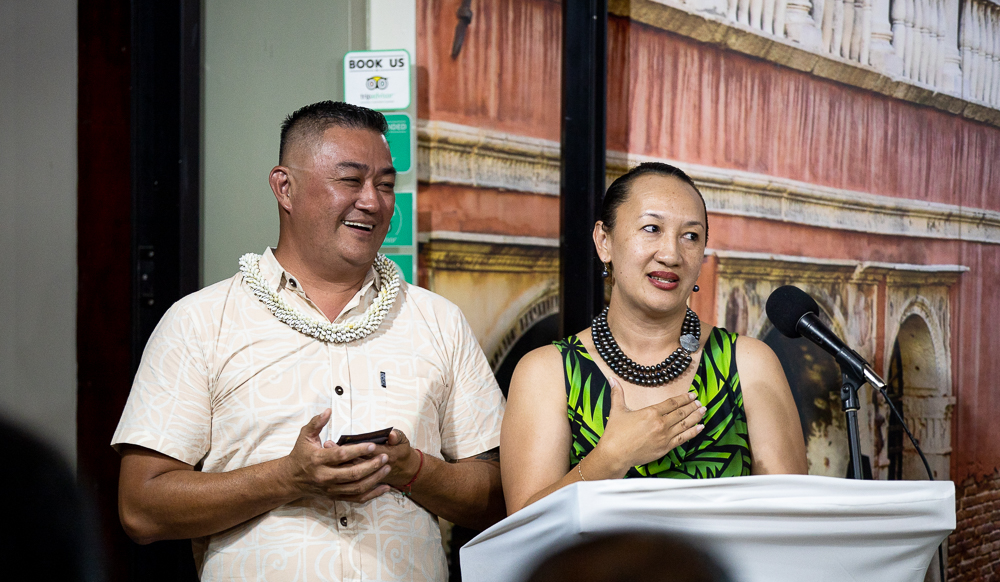 Owners and managers of the Orator Hotel, Leiataualesa Jerry Brunt and Charlotte Chan Mow-Brunt competed as Team Orator against the Family Cooks, and said they loved the experience of being on the show.

Their hotel’s restaurant has always followed a “farmer behind the food” ethos, trying to limit their ingredients to what is available and accessible rather than relying on imported products.

“We have always promoted buy local, cook local, and get locals to come and dine,” Leiataualesa said. “The whole Pacific Island Food Revolution affirmed that we at Orator are actually on the right track.”

Eating locally and conscientiously is the best way to maintain good health, he added.

“I am so not for dieting. It’s about the food we eat, the portions we eat and the time we eat, that is what we need to look out for.

“We’ve become too much westernised in the food we eat. There is nothing wrong with it but we are not used to it, we are Pacific,” Leiataua said.

The land Orator Hotel sits on used to be a prolific plantation of coffee, cocoa and even nutmeg and macadamia nuts, and the couple try to honour that legacy by replanting and cooking with those ingredients.

“We do support the farmers around us, we want to support our neighbours,” Ms. Chan Mow Brunt said.

The couple hope people watching the show and trying to improve their cooking do not think the recipes are expensive, hotel level meals.

“It’s not expensive: my famous panikeke burger from the first challenge was something you can cook at home, but because we did it in a way that it can appear in a restaurant, it looks expensive. You don’t need a fancy oven or a fancy dish to serve it on, just use your imagination – it is panikeke with ripe ladyfinger bananas, that is it.”

The couple agreed that their favourite local produce to cook with is breadfruit, and said it under-appreciated in Samoa.

“Samoa has yet to multiply on its goodness, from desserts to main course,” Ms. Chan Mow Brunt said.

“Instead of cornflour you can use Ulu, you can cook it and mash it and there you go.”

You can watch the two teams compete on the Pacific Island Food Revolution website.