Over the past six months, the impression that the Government is making up its response to the coronavirus as it goes has only been picking up speed.

On Friday, we had the head of the National Emergency Operations Centre (N.E.O.C.), Ulu Bismarck Crawley, the man in charge of this nation’s response to the pandemic, admit to failings of biosecurity policy at the border.

So much of the Government’s energy - and the people’s attention - has been devoted to preparing for an outbreak that hasn’t happened.

Since the original state of emergency was declared in mid-March the regulations have been changed so many times that members of the public have lost count.

Even the most civic-minded of citizens, supportive of the Government’s efforts, have long since lost the ability to carry in their head what is and is not permissible under this constantly changing regime. And so, it seems, have certain branches of Government.

But as we recorded yesterday, when it came to a situation that actually counted, with passengers incoming to Samoa, a Government that has become obsessed with details was found to be lax.

It was the latest example of the way in which the logic underpinning the Government’s approach to COVID-19 has been, to say the very least, less than sound.

But today we report on yet another case in which the Government’s attempts to regulate the coronavirus response has been once more self-defeating and contradictory.

State of emergency conditions led to command-and-control structures being introduced in March, so that the Government could be ready to move in case of sudden developments.

The N.E.O.C. was “activated”. We were told it was to be “focal point'' for collaborating between the many different agencies part of the response to the pandemic

To quote the Government N.E.O.C. was “established to manage the COVID-19 emergency response plan”.

They were styled as the overseers of the other parts of the Government, most notably the Ministries of Health and Police, who have their roles to play in ensuring safe edicts are issued and enforced.

But the curious case of the Police putting a stop to a St. Mary’s Old Girls’ Association (S.M.O.G.A.) event on Saturday raises some serious questions about how we are running our response to the state of emergency.

It should be expected that the lines of communication between the body empowered to oversee our pandemic response and the Police, who are meant to enforce it, would be crystal clear.

That would appear less than so.

As the front page story on today’s edition makes clear, the two were in fact working at exactly cross-purposes when the Police moved last Saturday to shutdown the Old Girls’ Association event at Birdie’s Bar, at the Faleata Golf Course.

The enforcement of state of emergency orders by Police has clearly been inconsistent.

In fact, there have been so many grey areas in the enforcement of emergency regulations. If we tallied them up end-to-end we could walk on them from here to Pa

There were two other weddings in the vicinity of Saturday’s fundraising event at which the Police were not present to ensure that attendance did not exceed 100 people.

The August light show for the official opening of the Land Transport Authority (L.T.A.) had people lined up around the seawall cheek-to-jowl.

We are calling for clarity and openness from the Police about how they are enforcing state of emergency regulations.

Fuiavailili Egon Keil would be the first to agree with the principle that all should be equal before the law and that should be reflected in those events that are selected for scrutiny and those that are not.

But what makes Saturday’s intrusion by Police all the more curious is that it was made in direct contravention of a letter from Ulu which gave explicit approval for the event to go ahead.

In a letter obtained by the Samoa Observer Ulu gives his express consent to the event’s being held.

“The Committee has received your letter dated 21 September 2020 with regards to the above subject matter,” Ulu wrote to S.M.O.G.A. organisers.

“For your information, the conditions for restrictions of the orders places emphasis on compulsory social distance of two meters, and that no more than 100 people are allowed.

“May God's blessings be upon your fundraising event.”

Social emergency arrangements were amended in May to explicitly prohibit “all fundraising dances”.

(As a digression this leaves us in an absurd situation where the R.S.A. nightclub’s ‘Thirsty Thursday’, inside a venue with a capacity that far exceeds 100 people, is entirely legal. But if a portion of the proceeds collected at the door were donated to charity then the event would not.)

The Commissioner clearly thinks that the S.M.O.G.A. event was in breach of the law.

The S.M.O.G.A. President, Vernia Mah Yuen, went to the utmost degree to ensure that her event was on the right side of the law; aside from the advance permission, promotional material no more than 100 people were allowed at the event.

She was clearly bemused by the Police’s actions on Saturday after having received, she assumed, permission from the highest authority in the land on social media restrictions.

She chalked up the events of the day to a misunderstanding but revealed again that the Police had clearly been inconsistent in their behaviour as Saturday’s fundraiser was in no way an exception.

“We thought fundraising was allowed in the sense of fundraising, because we have been to several fundraising events,” she said.

Reconstructing and analysing the S.M.O.G.A. shutdown in detail - something that would possibly require witness statements about whether attendees were tapping their toes  - is not likely to be helpful.

And it is not the point.

It does bring to our attention yet another confusing aspect of the state of emergency orders under which this country has been living under for half of 2020.

Not only are the regulations baffling.

But their enforcement appears to be entirely improvised. The peak body for managing the Government’s response takes a different view of what is legal to the Police and is ignored by them, too.

The Government is proud of its status as one of only a dozen nations in the world to remain free of the coronavirus.

But episodes like Saturday’s show us that this owes nothing to concerted effort.

The Government has been acting in an entirely uncoordinated fashion and we, as Samoans, are the ones who must pay the price.

Twisting court's words politics at its most crooked

The man most likely to assume the leader's role should caretaker Prime Minister Tuilaepa Sailele Malielegaoi ever decide to make good on his recent allusions to “taking a rest” still has quite a bit to learn. 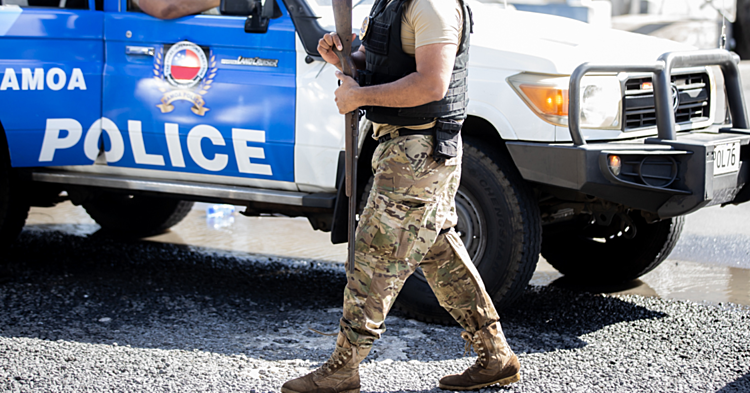