More than $222,000 of Samoa’s palolo delicacy was sold last year, according to new Government figures.

The sales figures are contained within the ‘Palolo Rising Report 2019’, which is compiled by the Inshore Section of the Fisheries Division of the Ministry of Agriculture and Fisheries (M.A.F.).

The report notes that palolo is shared and collected among Samoans for consumption but is also now a common product at the markets in Apia and Salelologa.

“Palolo [is] collected [and] shared among friends and families for consumption but nowadays it’s becoming a common product at the domestic markets in the months of October and November due to high demand and high value,” the report states.

In Salelologa, in particular, there was an increased amount of palolo sold, the Ministry found.

An estimated 1,127 kilograms of the delicacy was sold last year.

“For 2019 a total estimated volume of palolo catch which was domestically sold and traded at Apia fish market and Salelologa market was 1,127.31kg valuing at $222,048,” the M.A.F. report says.

“In comparison to the last four years it appears that the year 2015 has the highest volume and value landed,” says the report.

Last year, palolo was sold in bottles, plastic barrels and containers of different volumes or ofu (bundles wrapped with leaves).

“[Last year there was] observed a high increase in the value of palolo compared to previous years,” the report says.

M.A.F. officials went to the markets in Apia and Salelologa to survey the sales of palolo in October and November of 2019 during the Fisheries’ Division’s usual market landing and roadside surveys.

The market surveys were conducted three times a week from the main domestic markets: Apia Fish Market and Fugalei Market on Upolu and Salelologa Market in Savai’i. 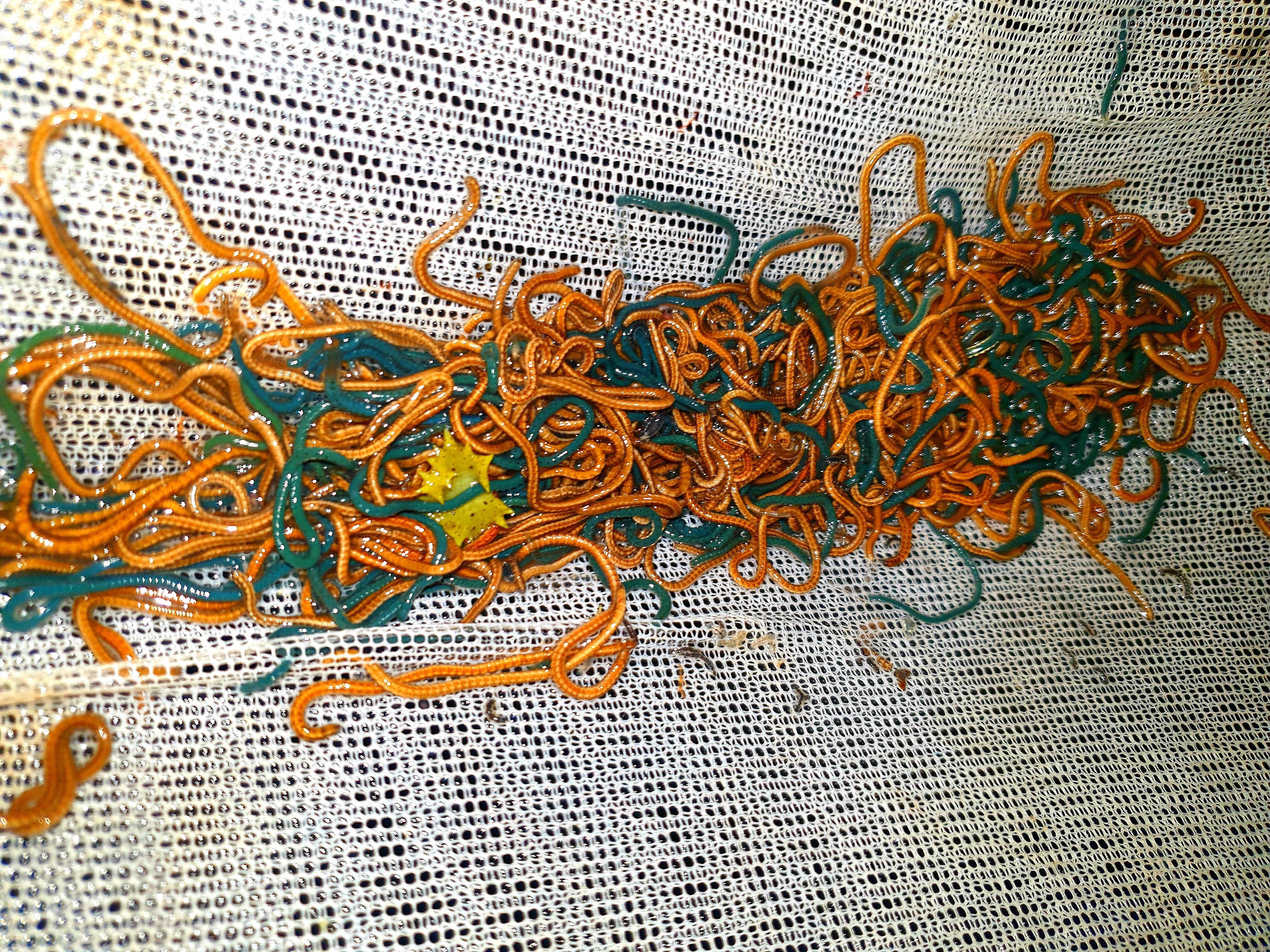 The roadside survey was conducted once a week from Apia to Faleolo.

Workers from the Fisheries division collected information from palolo sellers including the quantity, price of each palolo catch; the number of bundles or containers per seller; and the container size and price per item sold.

Vaisala, Asau and Satupaitea had the heaviest palolo conditions; their reef coverage was listed as at 100 per cent on 21 October.

As reported this week the estimated dates for this year's first palolo rising are predicted by the M.A.F. on the 8th, 9th and 10th, seven days after the full moon on Friday night, 2 October.

For November, the predicted dates for the second rising are the 7th, 8th and 9th. 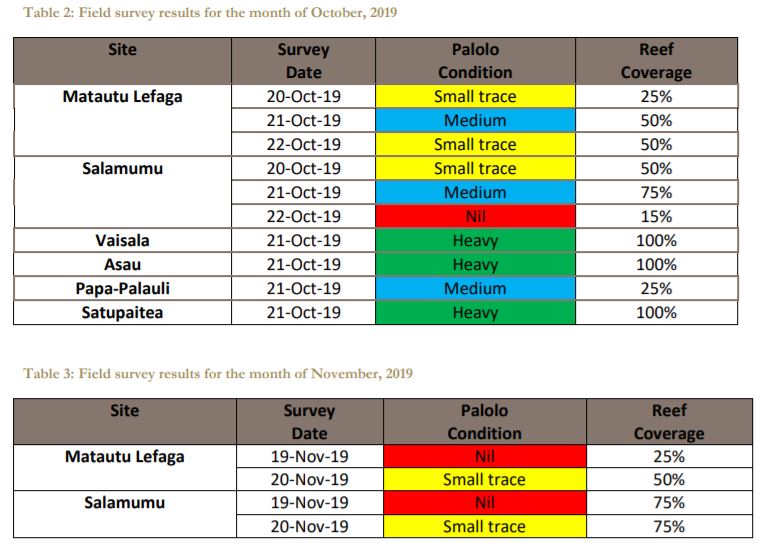 The report said the Ministry’s past predictions of when palolo risings would occur were proven correct.

“For 2019 [our] prediction of palolo dates [were] confirmed [to be] true by the successful heavy emergence of palolo catches recorded for both field survey…and domestic markets for the month of October while small trace emergence in the month of November,” the report said.

The report also suggests policy measures to promote the sustainability of the delicacy such as seasonal bans on palolo harvesting at certain sites.

“One initiative to consider from these findings is the establishment of seasonal bans for certain sites as a precautionary approach,” the report said.

“This initiative can also determine whether, with a chance to allow gametes to fertilise, it would result in heavy and successful harvesting in the following years.” 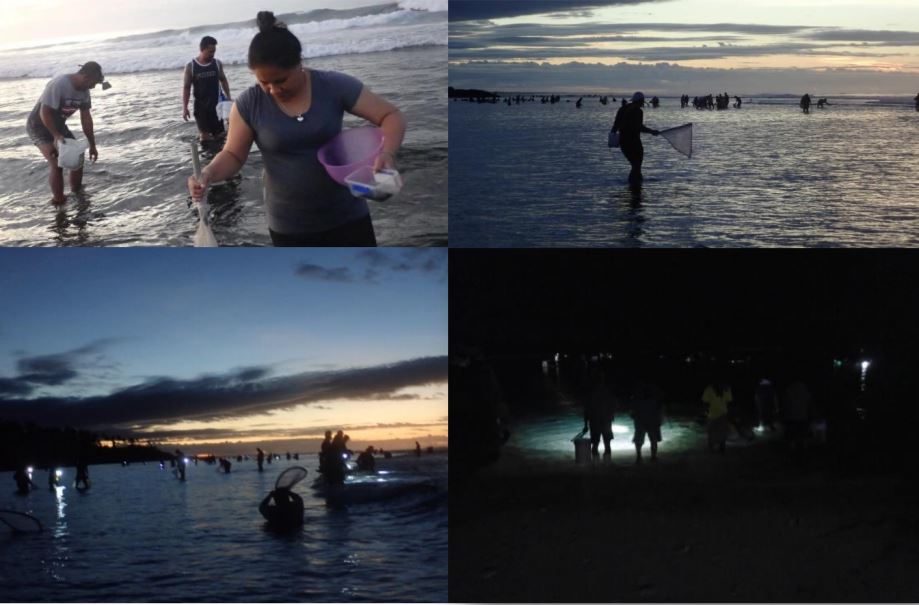 “However, further research needs to be carried out to solidify such conclusions because there are other factors to consider like climate change, identifying the number of collectors and density they accumulate,” the report said.

The M.A.F. concluded that more robust data from domestic markets, such as the total volume of domestic market landings, needed to be collected during the following rising reasons.

The six-page palolo report was prepared by Esmay Tanielu of the Inshore Section of the Fisheries Division of M.A.F.

Several hotels in Savai'i are celebrating the palolo with a festival to run from 7-12 October.