1Touch Ministries is not a weight loss challenge. It is about transforming your mind. (Photo: Supplied)
TM
By Tina Mata'afa-Tufele, 02/10/2020

Popularly known as the 1Touch Ministries Boot Camp, Pastor Lenny Solomona is the personal trainer and frontman of the program, whose activities revolve around what they call the four pillars.

The four pillars are: faith in God; food [and nutrition]; fitness [physical training] and fellowship.

Pastor Solomona said they apply for assistance from the US Embassy each year but they don’t always receive the grant. 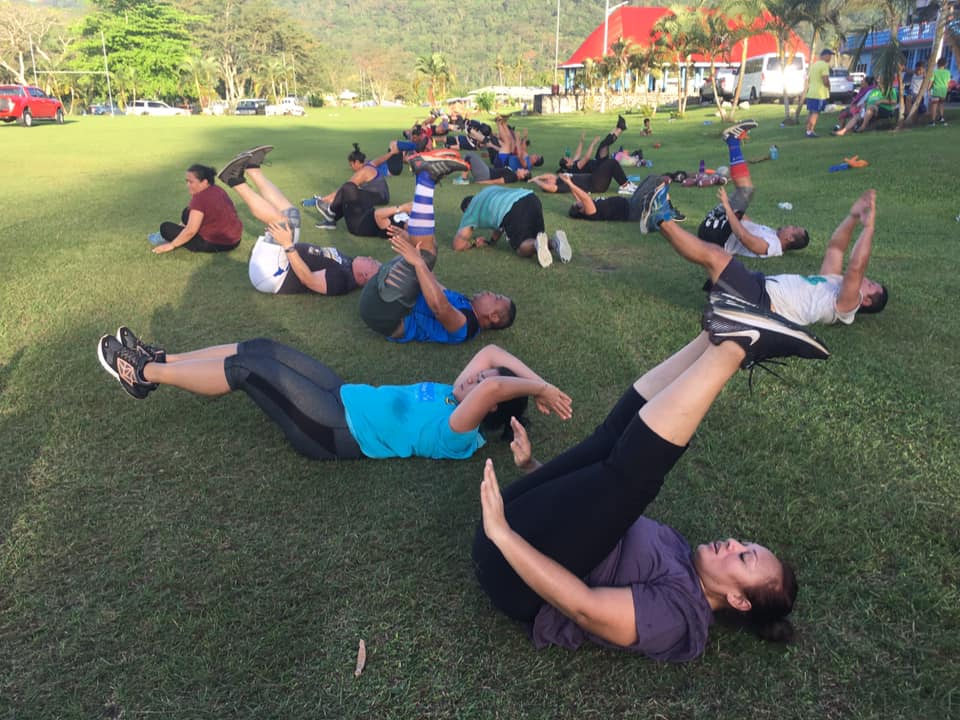 The announcement of the program being one of the latest recipients of the grants marks the second time they have received assistance.

“We try and apply for it every year but we don’t always get it. This is our second time. What we have been allocated is to help us run and bring awareness in Savai’i,” he said.

“So the project is specifically for Savai’i because we haven’t done this in Savai’i yet. We’ve got a whole year to do the actual program so we’re looking at doing in mid-next year.”

The COVID-19 global pandemic has had an impact on their activities, according to Pastor Solomona, but they intend to push ahead next year.

“Everything slowed us down with the Covid...we won’t be doing it this year but we’ve got the funds now to help us do a program there next year some time.

“We will be doing something like that but we haven’t actually put any plans together yet.” 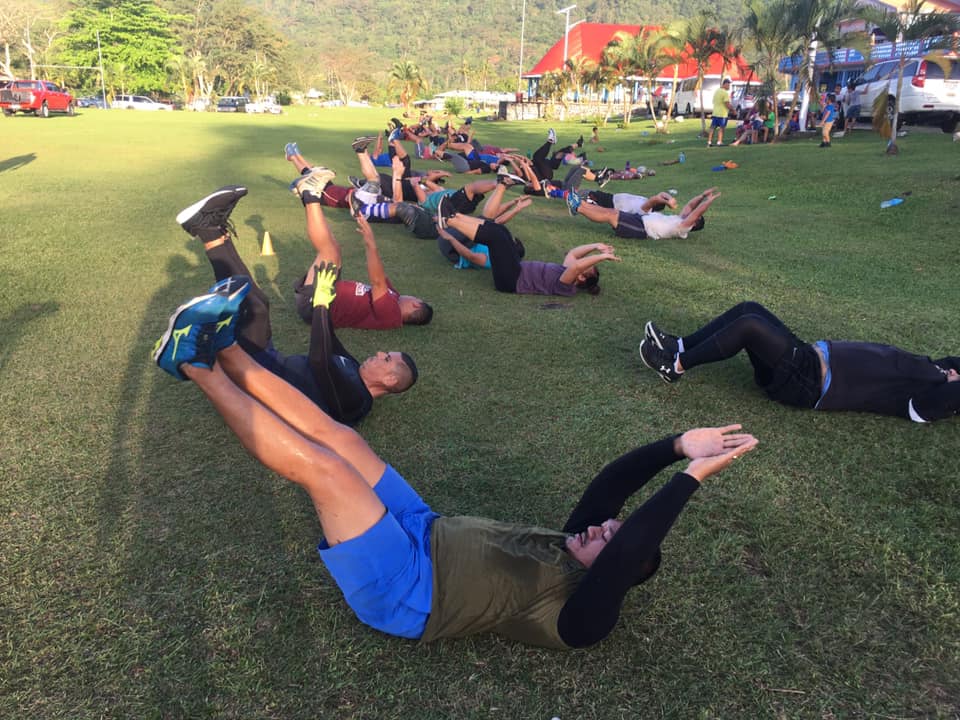 More than 100 people have joined the Boot Camp which is now in Week 2 of Season 27.

Pastor Solomona said the program is now in its sixth year since its establishment in 2014.

“When I say Season 27, it’s not the 27th year. It’s actually our sixth year but we always call each challenge a season so it’s the 27th 10-week challenge we’ve had since we started in 2014. We didn’t have the first two [this year] because of the lockdown. This is only our second one this year.

“Normally, it would be the fourth and final one. It’s going really well…a lot of people tend to come in for the last one because they want to lose weight for Christmas.

“There are over a hundred registrations for this one…it’s full on at this stage. It normally is at the first stage and we will just see how people go when we get half-way.”

Emphasising that their objective is not to make a profit, Pastor Solomona said their focus is on the transformation of one’s personality in terms of his or her faith, fitness and diet [food].

“The focus isn’t the money, the focus is on transformation. If we focus on the money it becomes their driving force but the problem is they end up doing all the wrong things because all they focus on is the money,” he said.

“Nobody actually knows what the amount is and we don’t announce it, we just give it to the person. We want them to focus on transformation, really transforming the mind. Our Boot Camp is not a weight loss competition although people do lose weight.”

According to Pastor Solomona, anyone can lose weight but the program has a different philosophy on how it goes about it.

“Fasting is a spiritual principle but a lot of people, if you are not fasting, they are just starving themselves. What happens is that they drop the muscle tissue.

“They lose weight but they sacrifice their muscle tissue in order to get there so in the end your body composition hasn’t changed. You just lost weight so what we teach is all about transformation.”

Pastor Solomona added that the 1Touch Ministries Boot Camp is also a biblical program as it is all based on the Bible.

“If you want to put on weight, just don’t sleep and deprive yourself of sleep and that is one of the four pillars. A lot of people think it’s about food but food is just one aspect. Some people think it’s just about training. That’s another aspect.”

The largest number of participants that the program has had was 228 in Season 3 back in 2014.

In Samoa, Pastor Solomonan said the people “are very blessed” as many are sporty but the biggest challenge facing Samoans is “renewing” the mindset.

“It wasn’t the kilos because we don’t do it based on the kilos. We do it on body weight percentage, he got the highest percentage out everyone who joined it,” he said.

However, Mr Solo had a stroke in 2019 and said he feared his medical condition, though Pastor Solomona didn't know until the prize giving ceremony.

“I didn’t know that my team already knew but I didn’t know until he shared his testimony…he is under 40, has a very young family and last year he got the biggest shock of his life,” he said. 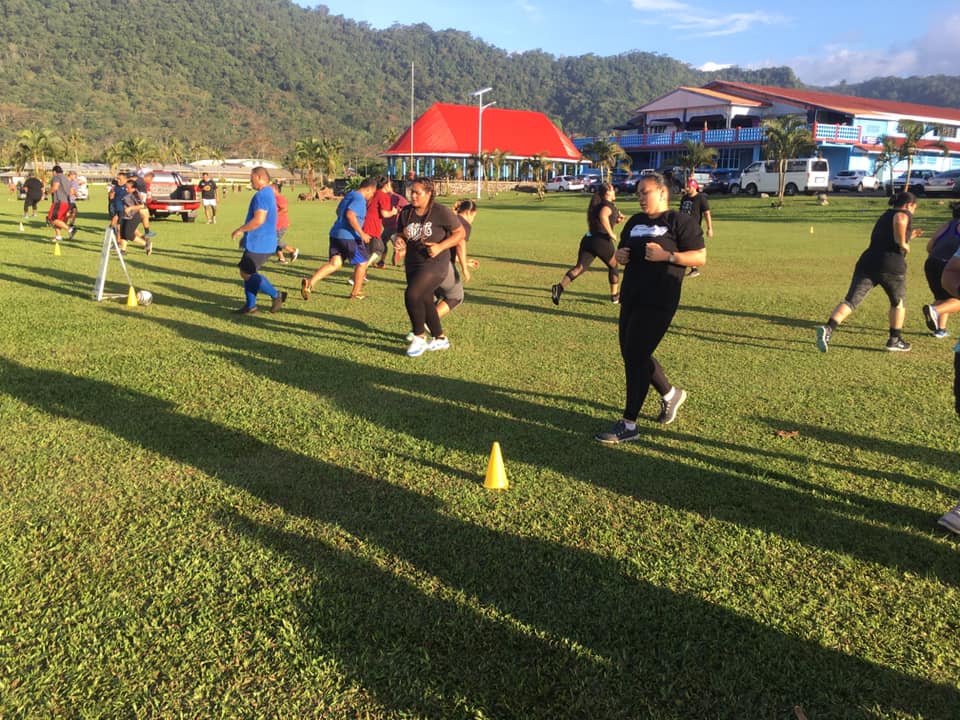 “He didn’t miss any Boot Camps. He was a well-deserved winner; he didn’t even know there was prize money. It was just a bonus but it was not something that pushed him to come to the challenge.”

The Top 10 finishers in the Boot Camp receive prizes but only the Top three get a cash award.

“Some don’t stay, there are people who fall off the wayside and we can’t control them. Ultimately they have to make the decision themselves,” added Pastor Solomona.

“It’s open to anyone. A casual just comes in and pays $5 tala for each day and we have a lot of people like that who don’t necessarily want to be in the challenge but they just come because they just want to get a faaafu and some people come for the fellowship.

“It’s a real family atmosphere and it’s not just about the training it’s about people. The hardest thing for us is trying to get them to go home after they finish.”

Boot Camp is from 6-7pm at the St. Joseph’s Campus in Alafua.