C.E.O. of the Ministry of Prime Minister and Cabinet Agafili Shem Leo who is also the Cabinet Secretary. (Photo: Vaitogi A. Matafeo)

Cabinet has approved a $1.21 million rescue package in the form of payments for hospitality workers made unemployed after the industry’s devastation following the coronavirus downturn.

Previous Government forecasts have suggested as many as 3000 people have lost their jobs since international arrivals to Samoa ground to a halt and the industry was brought to its knees.

The people expected to be eligible for the programme include employees at hotels; car rental services; nightclubs and bars; businesses around the airport (not including taxis); and certain manufacturing companies.

This is according to Cabinet Directive (20) 38 dated 23 September, 2020 that was endorsed by the Ministry of Prime Minister and Cabinet Chief Executive Agafili Shem Leo who is also Secretary to Cabinet.

This financial assistance will go directly to those whose employment was affected as a result of the COVID19.

“Staff that were made redundant will each receive $300; those placed on leave without pay will get $200 and employees with reduced hours or working part-time will receive $100,” the directive reads.

The money will be drawn from phase II of the Government’s coronavirus stimulus package.

Assistance was promised to unemployed tourism sector workers in the form of a subsidy as part of the $66 million in financial assistance measures. 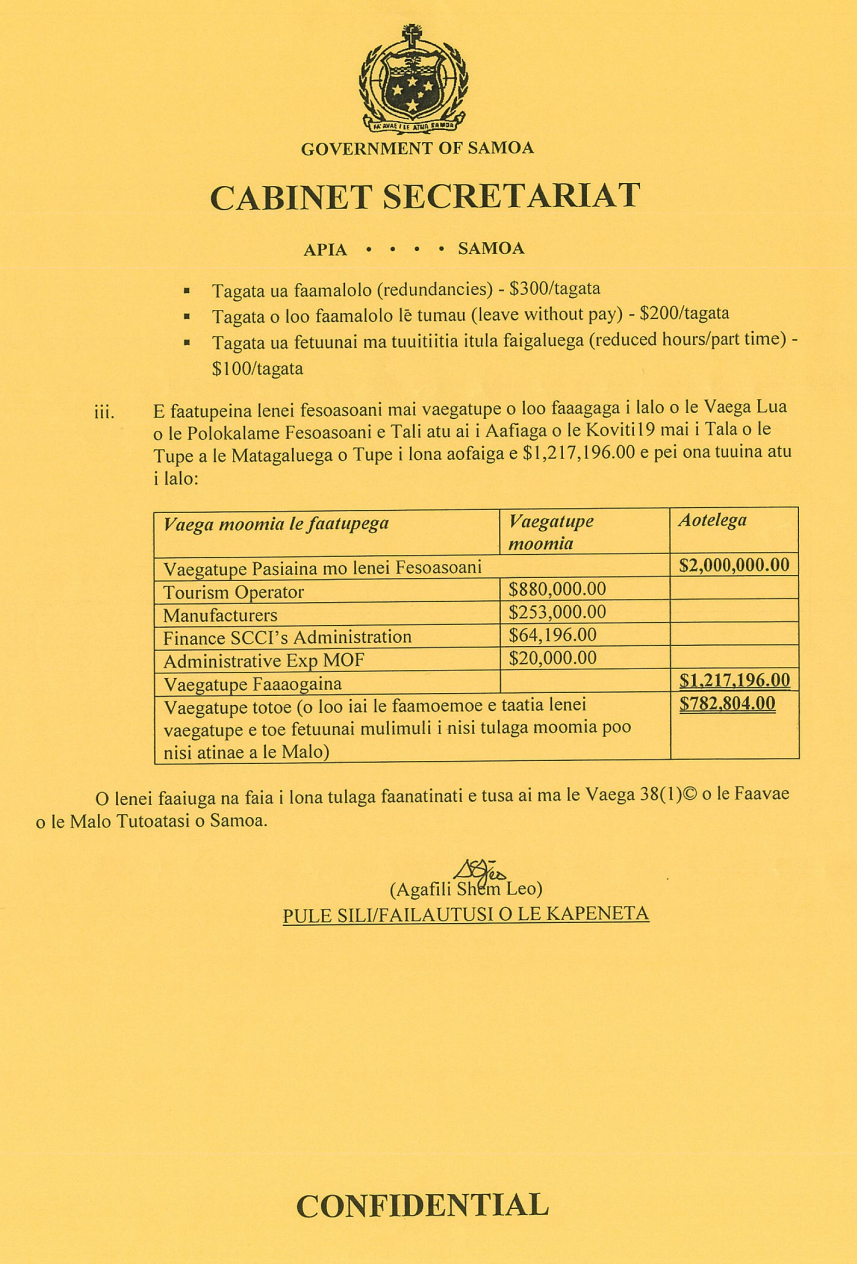 But the Government never unveiled what these plans would amount to, promising to consult with the Chamber of Commerce to develop a package.

This is the first time that the details of the Government’s unemployment subsidy have been revealed.

According to the Cabinet directive, the unemployment subsidy is drawn from a total pool of $2 million of which $880,000 will go to former employees of tourism operators; $253,000 for ex-manufacturers; $64,196 will go to cover finance costs for the [Samoa Chamber of Commerce and Industry’s] and $20,000 for Ministry of Finance administrative expenses.

A total of $782,804 remains unspent and has been set aside for future Government development projects.

Reference to the subsidy was first made in June by the Minister of Finance Sili Epa Tuioti who, during his ministerial speech, said the Ministry will work with the Samoa Chamber of Commerce to shape the assistance for unemployed workers.

“The Ministry of Finance will work in collaboration to distribute monetary compensation for all workers who have been laid off, been put on leave without pay or have had their working hours reduced due to the COVID-19,” the Minister said at the time.

Last week, the Samoa Tourism Authority signed an agreement with the Samoa Business Hub Australia Pacific Training Coalition and the National University of Samoa to provide training for redundant employees in the tourism industry.

The Memorandum of Understanding was signed at the S.T.A. conference room in Apia.

The training comes under the Government’s stimulus package as a way to support tourism sector employees that have been made redundant with the idea to maintain the level of knowledge or capacity of the employees until things open up again.

The stimulus package provided by the Government for tourism is to provide salaries for those that have been made jobless due to the COVID-19 financial downturn in providing training opportunities for those people.

The training will be based on four courses: cookery, food and beverage, tour guiding and front office skills, and accommodation services.

The three delivering agencies of the training, will cater for different levels of employees in the sector and spread the qualifications across the pool of unemployed workers.