Oloapu Ka Iese, an election candidate for the Fa'asaleleaga No.2. constituency and matai from the village of Iva, Savai'i who accompanied him at the H.R.P.P. registration on Tuesday (Photo: Aufa'i Areta Areta) 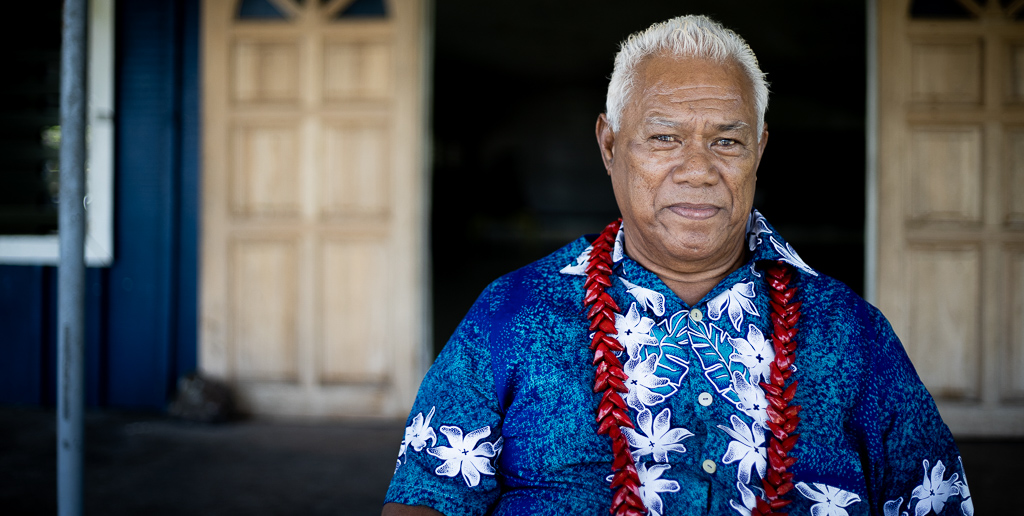 A 67-year-old chief from the village of Iva, Savai'i, wants to represent his village and constituency in Parliament after the 2021 General Election.

Oloapu Ka Iese has already registered with the ruling Human Rights Protection Party (H.R.P.P.) and will be vying for the Fa'asaleleaga No.2. The seat is currently occupied by veteran Parliamentarian, Gatoloaifaana Amataga Alesana-Gidlow.

At the H.R.P.P. Headquarters on Tuesday, Oloapu was flanked by the matai from the village of Iva, who traveled from Savai'i to support him when he registered. Asked what inspired him to contest, Oloapu said he is only following the wishes of his village and constituency.

"Joining the election race for the 2021 General Election is something that never crossed my mind," Oloapu told the Samoa Observer.  "We've always supported our current M.P. Gatoloaifaana Amataga Alesana-Gidlow.

"But after meeting with the village, I have been asked by the elders of the village and the matai of our village (Iva) to run in the election.

"I have been asked twice by the matai to run, with their belief that it is time for someone from Iva to step in the political arena and represent our district.

"I declined the request, twice, because I was mindful of our current M.P. and I highly respect her. However, I was reminded of God's word that we should follow whatever calling we have.

"Therefore, I changed my mind and decided to follow the wish of our village.

"As you can see, I can't walk without the wooden canes, because of an accident that happened in 2008, so I was hesitant to accept the request.

"But I got to think about it and decided to run."

While Oloapu believes that it would be impossible to unseat the current M.P., he is optimistic that both of them will enter Parliament in the next Parliamentary term.

"There is that new law that can take in a female candidate to make up five women in Parliament and that's a gateway for Gatoloai. She can enter Parliament using that law if she collects a high percentage of votes.

"As for me, if the village supports me and I succeed, I will also become a Member of Parliament.

"So there's nothing wrong with us both running in the election."

The decision to flag the H.R.P.P. banner in the upcoming election was a decision that was not hard for Oloapu to make.

Despite the establishment of different political parties in Samoa, Oloapu said his heart will always be with the ruling H.R.P.P.

"This village and constituency will always support the government and H.R.P.P.

"We want to follow the footsteps of the former Prime Minister, the late Tofilau Eti Alesana, who did a lot for our constituency."

Asked for his plans, should the people vote for him to be the M.P. for Fa'asaleleaga No.2, Oloapu said: "First and foremost, I want to push for the area of infrastructure.

"It has been ten years since we've asked the government to fix the access road that will take us to our plantations, but nothing has been done to it.

"I truly believe that it will push and encourage our people to work the land and continue to make plantations if we fix our roads.

"And I want to keep pushing that."

Upgrading learning resources and facilities for the students of the constituency is also on top of his agenda.

"We also need to upgrade the facilities that are being used by the students of the village. They are the future of this country so we need to make sure that we create an environment for them that will push them to work and learn."

Sports is another area the father-of-eleven wants to develop.

"There are so many different sports that need to be developed especially in Savai'i.

"We have so many talents in Savai'i yet there is little or no development at all.

"We need to push that area so those talents are recognised and well developed.

"Not everyone was born to work in an air conditioning office so we need to keep that in mind and push our children who dropped out of school to develop their passion and love in all different kinds of sports."

While Oloapu said he is confident he will succeed, he said the decision must come from God.

"If it is His will for me to represent our constituency in Parliament after the 2021 Election, it will happen. I am just a servant, humbly accepting the wishes of the elders of the village."