Former M.P, Papali’i Li’o Oloipola Taeu Masipa’u, is aiming to return, but this time under the banner of Fa’atuatua I le Atua Samoa Ua Tasi (F.A.S.T.).

The 66-year-old is contesting the Faasaleleaga No. 3 seat currently occupied by Namulau’ulu Sami Leota.

He is a former Tautua Samoa Party member who ran under the flag of the Human Rights Protection Party in the Fa’asaleleaga No. 2 by-election last year saying it was the choice of the people.

But due to political strategy and a determination to get into Parliament, Papali’i decided that the best way to go was with F.A.S.T.

“Fa’asaleleaga No. 3 currently has a substantial Member of Parliament from the H.R.P.P. and with how I saw it, I had no chance if I went back there; my brother who is in the seat right now is a great representative,” said the father-of-seven. 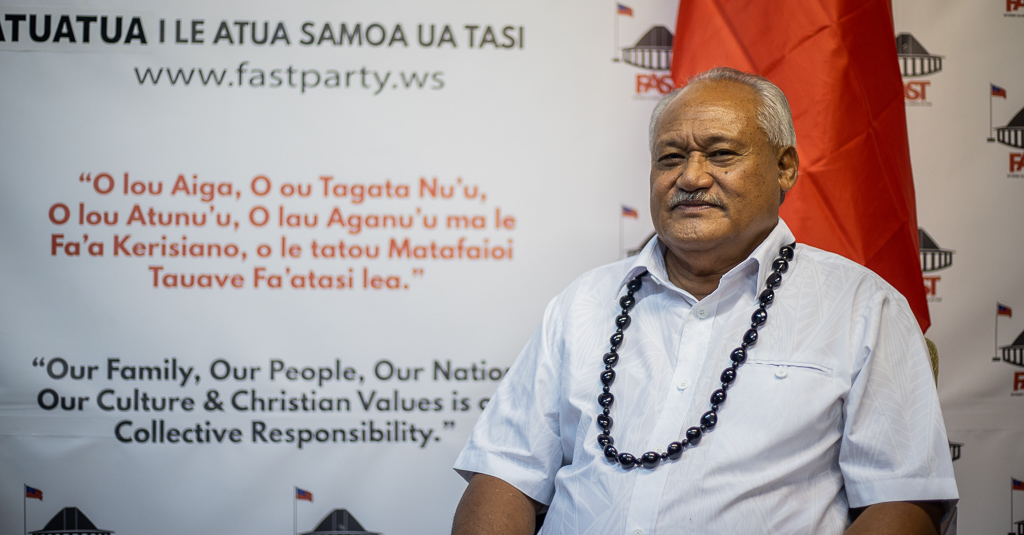 “However, as someone who wants to become a Member of Parliament, we all want to reach that seat in Parliament. But the question is, how do I make it? Definitely not through the same route, so that’s why I decided to change my sailing channel.

“But wherever it is, the goal is to ensure the prosperity of the nation but the utmost importance is peace amongst our people, and that was my choice.”

Papali’i who is a lawyer by profession, added that what solidified his decision to join F.A.S.T. was their manifesto.

“In my view and my constituency’s, we think F.A.S.T.’s foundation and goals have been well organized and should we be successful, we aim for equal opportunities for all constituencies,” he said.

Speaking of, Papali’I said that amongst his priorities agenda for his constituency, is the improvement of the ford connecting Lalomalava and Sapapalii.

Papalii said the fjord which connects the inter-island wharf and the main hospital in Savaii needs improvement for the welfare of the families living in close vicinity as well as the travelling public.

He said that all 51 constituencies of Samoa should be treated the same and opportunities made available to them equally.

“The truth is other constituencies are more developed than others. For example, road works on plantation or inland roads, Tuasivi roads are all tarred and sealed while our inland roads in Sapapalii and Safotulafai have not reached a satisfactory level,” he said.

“And I have seen the goals of F.A.S.T. that there is a chance my constituency may reap some benefits from it especially in the areas of improving road networks especially our area in Tapu’eleele.

“That area is a bit low while the rest of the village lives on higher grounds; the roads need improvement as well as the creation of road-side sewers to ensure the water does not ruin road works.”

Papali’i is also hoping that through his standing he is able to further advocate for the allowing of lands further inland behind Safotulafai and Sapapalii to be worked by the people of his constituency.

He assured that joining F.A.S.T. has nothing to do with personal gain but rather to serve the people of Samoa and the determination to improve the lives of Samoans.

“The Legislative deals with the laws which govern the country as well as advice that is given through these laws, and it is this reason I continue to reminisce about the Chambers,” he said.

“[The Legislative] Chamber is of the nation, where these laws are made and it is always good to have a voice, a contribution into what is discussed and deliberated in there.

“Advice, support and recommendations are important in constructing our laws and it is something I aspire to be a part of. Yes, it’s true I have been in there but it does not stop me from wanting to contribute more.”