The park, which is part of the broader Apia waterfront redevelopment, is nearing completion and is intended to symbolise the strength of growing relations between Samoa and China. It is being constructed by Chinese construction giant Shanghai Construction Group.

But leaked correspondence between Samoan and Chinese officials show the Government warned the Chinese constructors they were in breach of regulations.

In a letter dated 9 January this year assistant Chief Executive Officer of the Ministry of Work Transport and Infrastructure, Limutau Kirisimasi Seumanutafa, wrote to the Shanghai Construction Group

Her letter lists a number of problems with the company’s work practices on the site and warns of further actions being taken if they are not addressed.

“Our Office had received reports with attached photos on 6 January 2020 on discharging sediment from work activities on site into the lake and landslip around embankment which causes soil being washed into the lake,” Limutau Kirisimasi Seumanutafa, the Assistant Chief Executive Officer of the Ministry of Works Transport and Infrastructure writes.

“We also noted waste materials (timbers, bricks etc.) scattered around the site and uncovered cables on the ground.

“This a clear breach of the following conditions of your approved development consent.”

The letter, published by the international anti-Chinese Government newspaper the Epoch Times, concludes with a threat to the company to clean up its construction of the waterfront development.

“In light of the above non-compliance, we advise that immediate mitigations measures are carried out to ensure compliance with the above conditions of your approved development consent. We also request that an earthworks plan and report on proposed mitigation measures are submitted to our office no later than 14th Tuesday [sic] 2020,” Limutau’s letter reads.

“We will continue to monitor the site and failure to comply with this letter as well as the conditions granted will result in further enforcement actions under the [Planning and Urban Management Agency] Act.”

Attached to the letter are six supporting photographs which purport to show examples of rubbish around the construction site, exposed cables and rocks scattered around the river embankment. 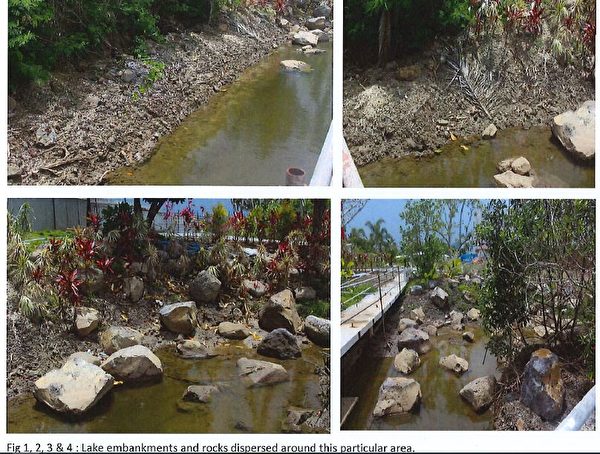 The Shanghai Construction Group worked on the upgrade of the Faleolo International Airport.

The company had revenue equivalent to T$80 billion and profits of about T$1 billion, according to the Financial Times. It has more than 40,000 employees.

The company is listed by the American credit ratings firm Moody’s as “100 per cent owned by the Shanghai government” and has the expectation of being bailed out by the Chinese Government in times of stress.

Calls to the construction company’s Shanghai offices on Sunday were not returned.

A request for comment on the letters was sent to a Government spokesman on Sunday but no comment was received before press time.

An email query to the Chinese Embassy about the letters did not receive a response.

The Park is part of the Apia Waterfront Development Project, which covers the area behind the FMFMII Government Building at Eleele Fou.

Reports of vandalism incidents at the park were revealed last week. Attempts to visit the site by the Samoa Observer on Sunday were not possible due to it being cordoned off to members of the public.

By August this year the project was listed as 75 per cent complete despite the project being hit by construction delays due to border restrictions imposed because of the coronavirus.

Before the letter of complaint was sent to the construction company, the Chief Executive Officer of the Ministry for Works, Transport and Infrastructure, Magele Hoe Viali requested an expansion of the park’s facilities.

The Samoan Government also wrote to China’s Foreign Ministry with an extensive list of requests for additional construction to the park project before its intended completion this year.

“We raised concerns on the instability of the area surrounding the pump house behind the FMFMII Building due to excavation works by the Construction Contractor,” Magele wrote on 19 December 2019.

The addition of traditional style Samoan fales and drainage to the park’s car park was also discussed.

The Park and a separate Arts and Culture Centre project are both funded by the city of Huizhou in Guangdong Province.

In May the Chinese Embassy in Samoa announced the projects were both subject to delays because of the coronavirus and border closures preventing Chinese engineers from entering the country.

The two projects are part of six Memoranda of Understanding and Agreements signed between Samoa and the Huizhou Municipal People’s Government of Guangdong Province, China.

The Samoa Meteorological Service is preparing for the cyclone season with a regional meeting of more than 130 meteorologists and scientists.