Educators from 21 primary schools have undergone a week-long workshop to prepare them to teach the 'Guardians Va’a' Education Campaign to bring Samoan culture into the classroom.

The workshop was conducted by Roman Waterhouse and Josephine Duffy of the Gaualofa, a traditional Samoan seafaring canoe designed to become a floating classroom and also to promote traditional cultural education.

The crew members delivered the 'Training of Trainers Workshop' last week at Siumu Primary School which was facilitated by the Ministry of Education, Sports and Culture and non-Government organisation Conservation International.

According to a media release issued by the Samoa Voyaging Society, the workshop was to train primary school teachers with the long-term goal of integrating and implementing the programme into the national curriculum.

It aims to incorporate lessons about the traditional Samoan voyaging canoe (va’a), culture and environment.

Primary schools represented among the participants were all from Upolu, from the south coast of the island, from Falealili to Lefaga.

Mr. Waterhouse and Ms. Duffy completed two of the modules which centred on traditional Samoan voyaging.

Mr Waterhouse said that the workshop was a success and the participants had evidently benefited from the teaching programme.

“The workshop went well and the teachers have enjoyed how interactive and fun the modules are,” he added 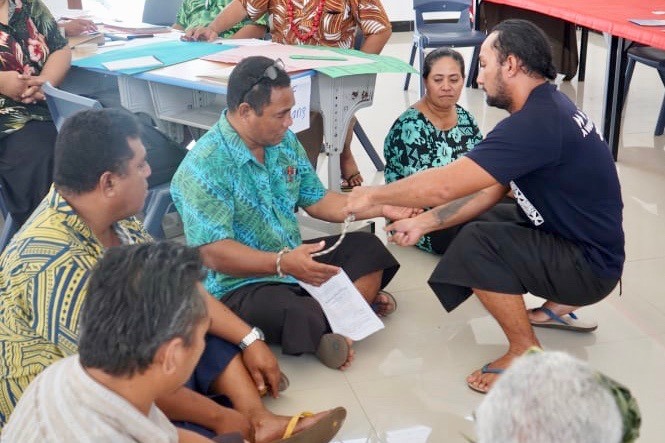 Ms. Duffy commented on the voyaging portion of the training, saying that the participants were particularly engaged.

"The participants really got into the mapping exercise and one teacher even stated that she could see that the Gaualofa is one way of preserving our Samoan culture and heritage," he said.

The next phase of the Guardians Campaign will begin on 28 September and will consist of a series of four community-based programs.

The Guardians Campaign is funded by the Civil Society Support Programme and the United Nations Educational, Scientific and Cultural Organisation in partnership with the Japanese Fund in Trust, Conservation International and the Keidanren Nature Conservancy.

The newly formulated curriculum will target children in Year 7-8 ranging from ages eight to 10.