From athlete to wheelchair paraplegic in challenging times

Eight days ago the country got to read the story of the 2019 XVI Pacific Games athlete Ofele John lene and how his world turned upside down, just a few weeks after the curtain was brought down on Samoa’s successful hosting of the region’s largest sporting event.

A story titled “spinal cord injury victim tells life story” in the September 6, 2020 edition of the Sunday Samoan took us into Ofele’s world, over a year after a freak injury sustained at home brought an end to his sporting career as a member of Samoa’s archery team, and an abrupt life consigned to a wheelchair to this day.

If life can be cruel to someone, on the back of years of success on both the personal and professional fronts, then Ofele’s story would be one of those.

But a few weeks after the XVI Pacific Games, Ofele recollected in an interview with the Samoa Observer, he fell and rolled down a hill at home with the back of his spinal cord hitting the cement.

“At the time, I didn’t feel that much pain, I was able to get up but I just felt this little numbness at the lower part. On that very day, we had other family things going on, we went to a wedding, came home and still didn’t feel anything,” he said.

“The next morning, I felt like I wanted to get up to get a drink of water, when I got off my bed, my left leg gave off, it just died out, it was numb so I thought it could be an early morning numbness that happens all the time.

“So I thought I’d just lie down for a bit and get up later, about maybe five or 10 minutes later, I stood up and both [my] legs gave away and I literally fell flat forward.”

It was there when life changed for the former athlete, as he was assisted by his brothers and was taken to the hospital.

Ofele was hospitalised for three months and upon his discharge realised how fragile life can be.

His story on how everything changed – from being an abled person, who at his peak was a national sporting representative, to being paralysed and immobilised – is not the first and is unlikely to be the last. 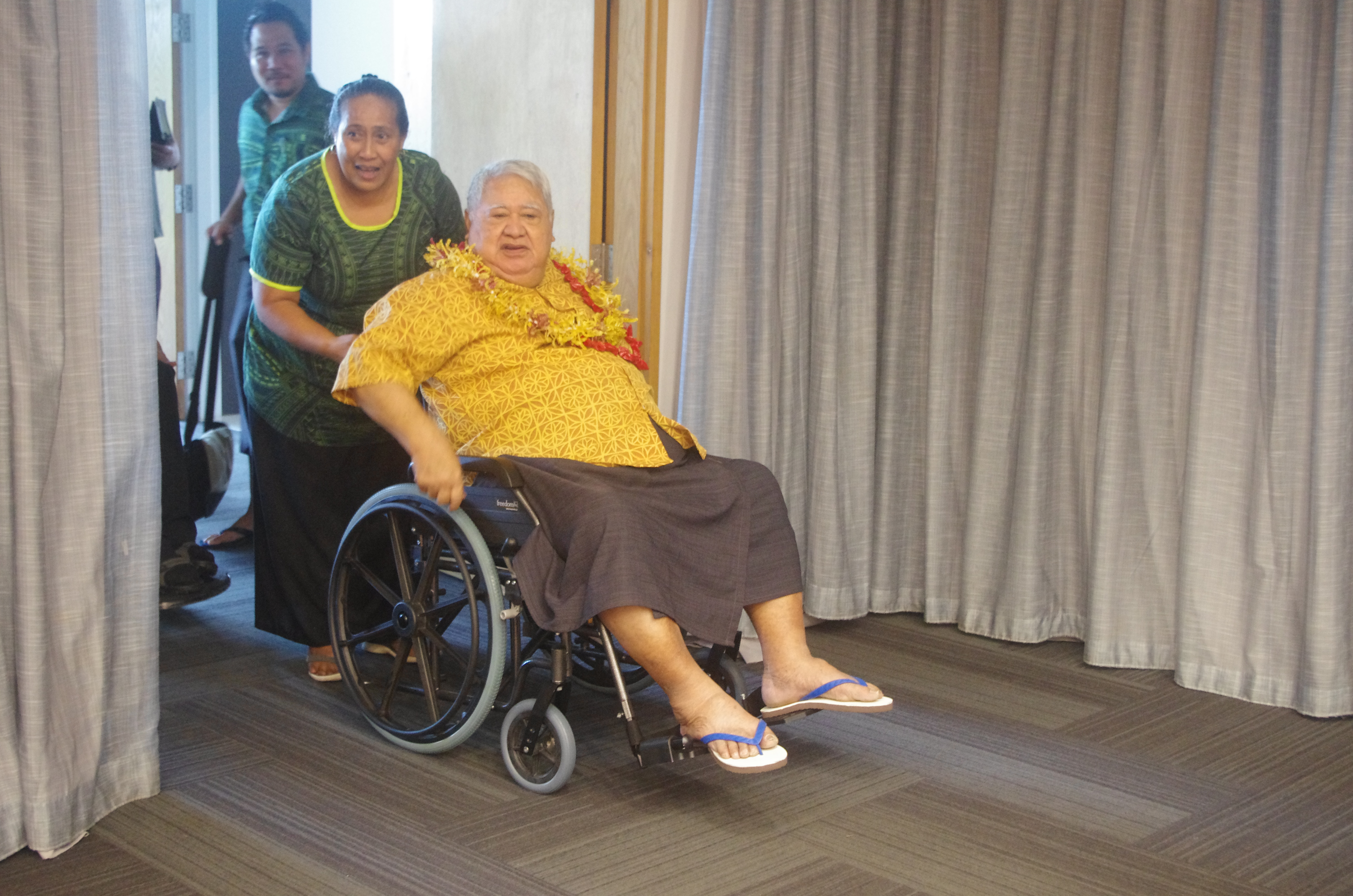 These sudden changes in the course of one’s journey in life can strike a blow to a person’s self esteem and outlook on life generally. As it could translate to a loss in quality of life and could mean long-term medical and homecare.

But hats off to Ofele, who has acknowledged the negative impact paralysis can have on someone’s life to drive him or her into a deep ravine, and declared that he wants to step up and give his “A-game” to provide for his family despite his condition.

We admire him for being an inspiration to other people living with a disability and courageous in the face of this setback, not only to himself but also his family.

Tuilaepa, like other guests at the event, were offered wheelchairs which they used to wheel themselves into the venue to start the official programme.

The short wheelchair ride that the Prime Minister made into the conference venue last weekend, while symbolic to mark the occasion, puts the spotlight on how the Government has performed in terms of policies to assist citizens living with a disability.

We say this, cognisant of the appeal in August last year by leading disability advocacy group Nuanua O Le Alofa [N.O.L.A.], for effective transport arrangements for people with disability.

N.O.L.A. General Manager, Mata’afa Fa’atino Utumapu, said that the lack of transport options was a hurdle to progress being made in terms of their service to their members.

“The majority of our members live in rural areas,” she said.

“Our transport system is not so accessible, it makes it harder for them to travel to the urban areas where the services are available.”

It is not known if the Government acted at that time when Mata’afa raised the issue, as the measles outbreak hit the country a month later, before the COVID-19 global pandemic followed early this year, which would have greatly affected marginalised groups including people with disability.

Seeing Ofele’s passion and desire to do his best despite his misfortune, especially in these difficult times brought on by the pandemic, is encouraging and would hearten those living in similar circumstances.

But humanitarian organisations such as N.O.L.A. and the Samoa Spinal Network can hardly do anything to intervene in the lives of people living disability during these challenging times without Government support and resources.

We say this while being reminded of a statement by India’s Mahatma Gandhi: “A nation’s greatness is measured by how it treats its weakest members.”

OPINION: We would be kidding ourselves to assume that members of one of Samoa’s oldest political parties don’t have a history of sneering at the work of the media over the years.

Judges and politics: oil and water