The General Secretary of the Congregational Christian Church of Samoa (C.C.C.S.), Reverend Vavatau Taufao, says they support the spirit of the Government's State of Emergency (S.O.E.) restrictions, limiting the number of people attending Sunday church services and enforcing social distancing in churches.

"All that matters to us is to comply and obey the orders," Rev. Vavatau said.  "We are all concerned about the Covid-19. No one dares stand against the pandemic so whatever precautions are in place, we need to follow."

Reverend Vavatau offered his opinion in response to queries from the Samoa Observer.

At the beginning of the week, leaders of three political parties condemned the Government's decision to crack down on churches as it tightens the lid on the S.O.E.

Last week, the Government reminded church Ministers they were responsible for ensuring that social distancing regulations were followed.

On Sunday, some churches had to enforce the order, by sending the children back home after Sunday school and spreading the congregation out to enforce the 2-metre distance.

Reverend Vavatau confirmed that they were approached by Police officers last week.

But he would not comment on questions about the fairness of the orders on churches.

"We can only know the fairness and the unfairness of any policy when we do an analysis," he said.

"We haven't got time to sit down and do an analysis. Police did visit us last week, and the elders thanked them and wished them well with their duties, and gave them our word that we will do as we've been told.

"So we cannot give an opinion on whether the enforcement of the order is fair or not. You'll have to wait after we conduct an analysis.

Last Sunday, there were some changes in how some parishes for the C.C.C.S. commemorated the Talalelei Sunday this year.

Normally, the different parishes gather together in different pulega (district) and commemorate the arrival of Christianity in Samoa.

However, in order to comply with the order, some parishes only selected 10 representatives from each parish.

Next up on the C.C.C.S. calendar, is White Sunday, which is celebrated on the second Sunday of October.

Asked if White Sunday celebration will be affected because of the S.O.E., Reverend Vavatau said they are optimistic.

"The big parishes will be affected; not the small ones.

"The parishes who have more than hundreds of people will have to find a way to make sure they do not breach the orders. But for the other parishes who have less than a hundred people, we do not have to worry about anything.

"And I think the majority of the parishes have less than a hundred people. For instance, our C.C.C.S. at Piu, only have 47 people, so we will go ahead and have our White Sunday program. But who knows, maybe they will open everything soon, before White Sunday."

This order is not being enforced in schools, nightclubs, and public transport.

Here's a photo Samoa Observer took of a bus full of students. 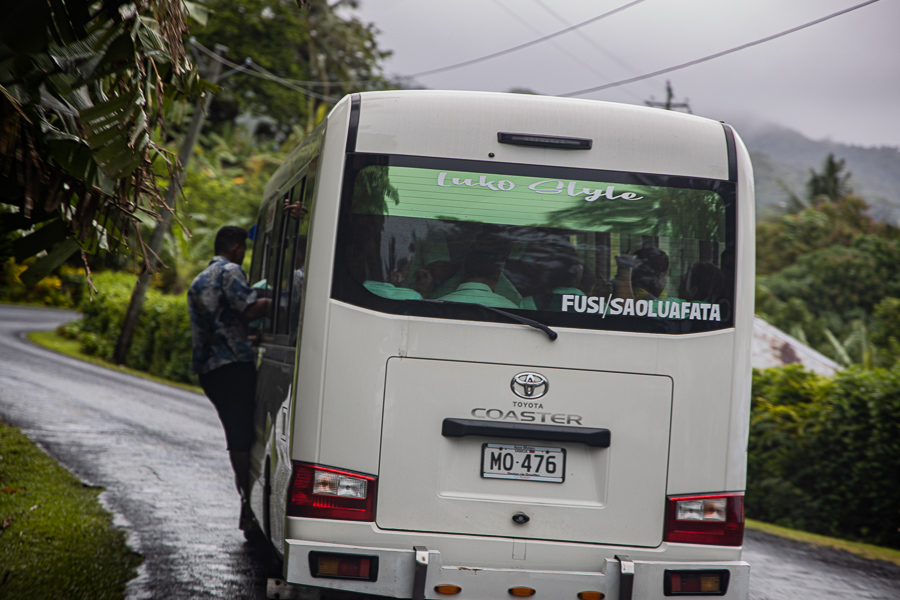