At least 1,200 students at the Ah Mu Academy and St. Mary’s Primary School were kept home due to flooding caused by Thursday morning’s torrential downpour.

Classes at the two schools were canceled and the students sent home in order to keep the children safe, administrators told the Samoa Observer.

Loretta Ulia, the Principal of Ah Mu Academy in Lepea, said Thursday should have been a normal day, but on her way to work she noticed the heavy rain and waterlogged roads.

“Arriving here, usually the children are here by 7am but it was close to 7.30am and no children were coming in so if the weather keeps up like this, it’s not safe,” Mrs Ulia said.

“Our school gets waterlogged because of the run-off from the road and a with a lot of the rain…it becomes very unsafe for children and you keep children in the classroom the whole day they get frustrated and restless so I decided to cancel school for today because of the bad weather.”

Children traveling to school in the heavy rain were also a consideration for the Principal:

“I know the other areas where some of the children are coming from, I know the roads there are going to be very bad for them so rather than having five pupils in a classroom, I decided that it is better for them to stay home.

“It was a spur-of-the-moment thing that happened because of the weather.”

By mid-morning, the waters had abated at Ah Mu and the Principal says if similar weather continues into tomorrow, school will resume.

“If tomorrow is going to be like this, then we are going to have school but this morning it was just so bad…there was just a downpour of rain,” Mrs Ulia said. 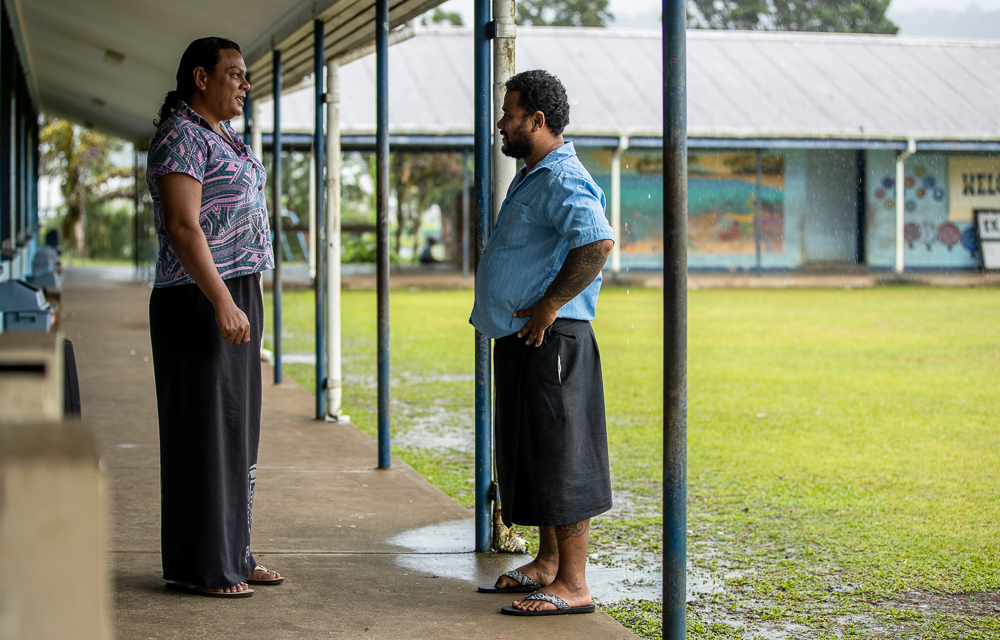 Mrs Ulia, aware of the school cancellation at St. Mary’s, said flooding in Savalalo “is a bigger problem…and they’ve had the problem for such a long time.”

St. Mary’s Principal, Iveta Vui, said that floodwater had even entered the classrooms:

“This is a big problem for our school. Our location is easily affected when the weather is bad. If you take a look around the campus it’s flooded and the flood waters have gone into the classrooms. We can’t have the children in this environment.

“In this weather, the students are susceptible to getting [illnesses such as the] flu which is going around right now…we have 900 plus students and the younger students, we can’t really contain them because they are so rascally. The parents, they will blame us if the children get sick.”

Principal Vui, who is in her first year as Principal at the Savalalo school, said they have a roll of more than 900 students.

She said that if the rain does not ease by Friday, she will keep the school closed again.

“We are going to stand-by and monitor the weather. We have no other options," she said.

"There are state of emergency restrictions that prevent us from all meeting together in the hall. We have canceled school for the children for their safety.”