No plan behind Ti'avea Airport: Olo

Independent Member of Parliament Olo Fiti Vaai says the Government never had a plan for the Ti'avea Airport - which has been reflected in the contradictory official reasons given for its existence.

Speaking during a joint press conference with another Member of Parliament for Urban West, Faumuina Wayne Fong, Olo shared his reservations regarding the airport project saying it could be a “very dangerous airport.”

“This airport started out as a domestic airport to be used between us and American Samoa. But as time passed, the Prime Minister said it will be an emergency strip,” the M.P. for Salega said.

“And then the Minister said, the airport shall be used as an alternative international airport to land our 737 and these are three different [types of] airports.

“It is clear that they are not sure what their plan is regarding this airport. And it’s not an airport that was planned out. They did not have a thorough layout for the project.

“That’s why the Prime Minister has a different answer from the Minister and the employees and General Manager.”

The comments from the M.P. [who is a civil engineer by training] come after the Samoa Airport Authority [S.A.A.] said the $17 million Ti'avea Airport indeed has a plan and it was “never designed” to service a Boeing 737-800 aircraft.

Responding to questions about the legitimacy of the project being called an international airport, as well as serve as a backup to the Faleolo International Airport, Silimana’i said Ti’avea is a “Code 2C aerodrome” whereas Faleolo is a “Code 4E aerodrome” – which are two completely different airports.

“In my opinion the airport is only supposed to be for the small planes, because if it was for the big international planes like the 737 and such, no plane would want to land there,” Olo said.

“The aircraft will be affected before it even reaches the airport so to me it’s a very dangerous airport. But let us leave it up to the pilots and the airlines on whether or not they accept using this airport.”

Faumuina added that the costs incurred in the construction of the Ti'avea Airport did not measure up with the Airport Authority’s budgetary position.

“What I know is that there is something inappropriate in terms of money. The Authority is not making any money at the moment with no departure tax, no planes coming in, no revenue, no parking fees and yet the Airport Authority is funding all this $14 million?,” added Faumuina.

The statement from the Authority was in response to a story titled “Ti'avea Airport falls short; makes no sense" published in last Saturday's Samoa Observer.

The story revealed that the Ti'avea Airport is currently far from meeting international length standards required of an international runway. 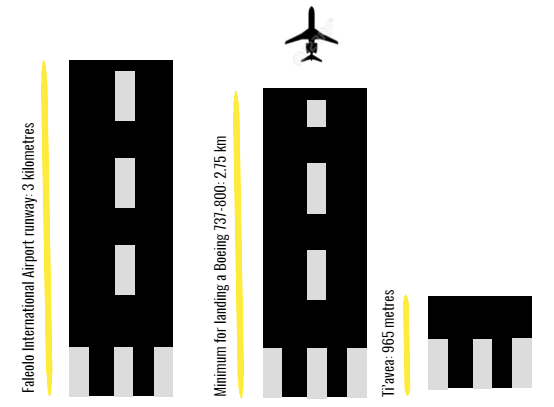 “Ti’avea Airport was never designed or intended to service a Boeing 737-800 aircraft,” Silimana’i said in a statement issued by S.A.A.

“As identified in the Authority’s Master Plan and part of the Government's plans to provide Samoa with easy access to all modes of transport, Ti’avea Airport was determined to be a Code 2C aerodrome.

“For comparison, Faleolo International Airport is a Code 4E aerodrome while ex-Fagalii, Maota and Asau are coded as 2A type aerodromes. These reference codes signify the types of aircrafts which can / cannot use a particular aerodrome.”

But the Minister of Works, Transport and Infrastructure, Papali’i Niko Lee Hang, previously said Ti’avea was being extended as a vital alternative to Faleolo, which is potentially under threat from climate change.

“We are expanding the runaway. There’s anticipation this airport will be used for bigger planes…” Papali’i said previously.

“The Government is also considering the importance of building the airport to international standards right now."