Election chief Faimalomatumua Mathew Lemisio has expressed satisfaction with the outcome of the Gagaifomauga No.3 by-election, saying his office “achieved a lot of targets.”

The Electoral Commissioner gave the appraisal of his office’s performance last Friday during an interview with the media, and added that they had a success rate of between 90-95 per cent in terms of meeting their targets.

"Everything went smoothly from our perspective," Faimalo told the media.

"We laid out the targets that we wanted to achieve in the process that we have, and we are positive that we have achieved 90-95 per cent [of their targets].

"The important thing we looked at was the security and integrity of the election."

The by-election also offered an opportunity to test the new systems and processes that have been set up ahead of the General Election next year.

"As you have seen we did not have to wait for the ballot box to be brought in, in order for us to find out the results. We have used our new systems.

"But the main challenge for us was the connection, so it's hard to rely on the system if the connection is not strong. But it was good that we still had our manual system to make sure that if one system fails, the other can back it up."

Asked about what he felt about the participation of the people in the by-election, he said: "I thought it was really good," he told the Samoa Observer.

"You know more than 60 percent [of the voters] turned out and like I said that number could go high when we start removing out the deceased and those living overseas so that is really positive going into the General Election." 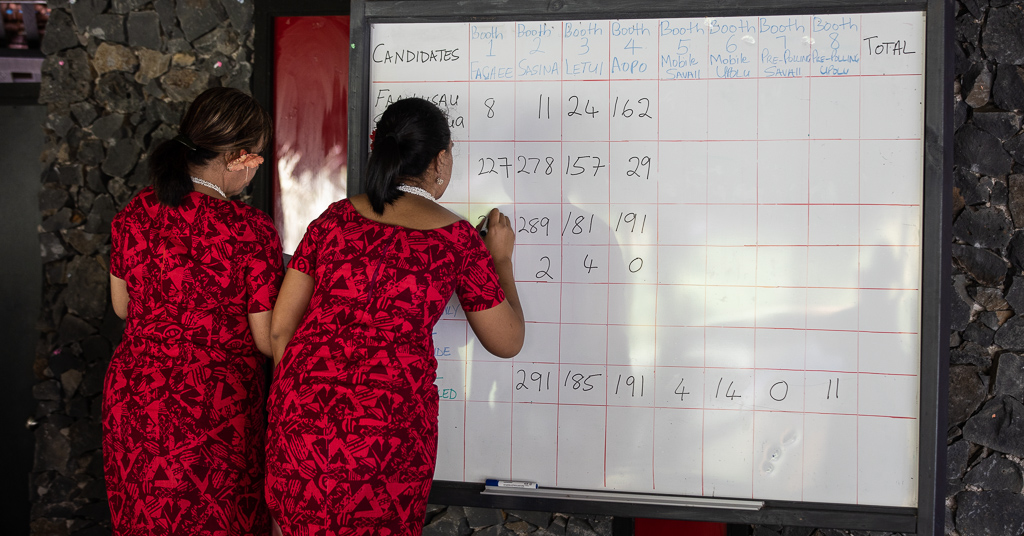 A total of 929 constituents out of the 1445 roll cast their votes last Friday, which means over 500 people did not vote.

However, Faimalo said that the O.E.C. will have to review the roll in order to get an actual number of those who couldn't vote on Friday.

"For sure there are people that are included in the roll that has already passed on. Surely some of them are now staying overseas.

"So we will do a review and analysis of the toll. We have been asking all the constituencies to help us identify those who have passed on and those who have traveled overseas because we don't know until they officially inform us."

A time-frame of six months has been given to the O.E.C. to do a review and compile a report on the outcomes and results of the by-election to present to the Parliament, said Faimalo.

Only after a review of the roll is undertaken can they find out who will be fined for not voting in the by-election last Friday.

According to Faimalo, not only they will be penalised financially but it will be included in their record.

Faimalo said his office is appreciative of the help and response from the constituents of Gagaifomauga No.3 and hailed the by-election a success.

"Starting from the beginning, when we conducted the registrations, up until election day. The majority of the voters were based here in Savai'i. We are satisfied with their response, everything went smoothly and nothing went wrong."