The General Manager of the Electric Power Corporation, Lupematasila Tologata Tile Leia, will contest the seat for Falelatai and Samatau in the 2021 General Election.

After 38 years of service with E.P.C., he will be up against the Associate Minister of the Ministry of Natural Resources and Environment, Taefu Lemi Taefu, in the upcoming election.

Speaking to the media on Tuesday, after registering as a candidate for the ruling Human Rights Protection Party [H.R.P.P.], Lupematasila said that it has been close to 40 years since he had served Samoa through E.P.C. 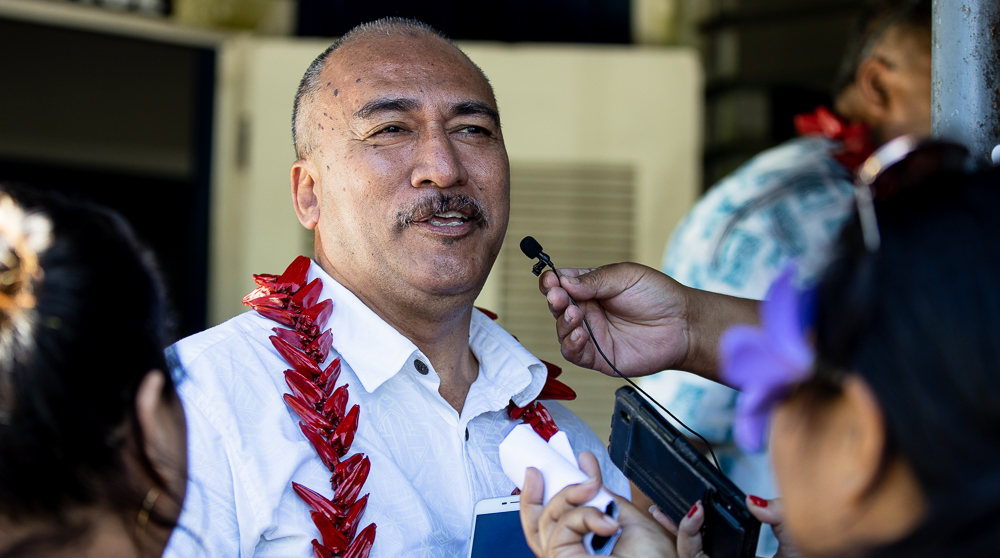 “I had a thought of running in the previous election but I prayed to God whether it was the right time but now I feel that this is the time to partake in next year’s election,” he said.

The 56-year-old added that the decision to contest in the election would not have been possible without his constituency’s approval.

“My constituency was happy when I made the decision to run in the upcoming election and I was also relieved because despite my own choice to go the final call comes from them.”

When asked why he joined H.R.P.P., he said that the decision was from his district which has been a loyal supporter of the ruling party.

“It’s not about what the candidate wants, it’s about what his constituency wants.”

He said one of the reasons why he decided to run was to make a contribution in the laws being made in parliament.

“And also assist my district with road works, school buildings and hospitals and also making projects that will assist the development of my district to stop depending on overseas funding while our district will depend on its own resources for survival.

“I am not only looking at developments that our current MP is working on but also other plans that Government has.”

Additionally, he added that their current Member of Parliament, Taefu, has made an immense contribution to both Government and district in terms of development.

“At the end of the day, it is up to the district who they decide will win, if Taefu will be reappointed than that is their will but if I am given a chance to serve my constituency than that is all up to God.

The father of two also mentioned that his contract with E.P.C. concludes on October.

“Maybe it is about time that I pass on the role to someone that can continue it while I seek a position in parliament, the place where laws are made and passed to lead our country.

“At the moment, my position as General Manager has been advertised and the election is just in time because my contract ends on October.”

Lupematasila was a former student of Avele College and he is a Mechanical Engineer by profession, and graduated from the University of Technology in Papua New Guinea in 1986 and joined E.P.C. in 1987.

He was the first Samoa engineer to be appointed as Project Manager for the biggest ever Power Sector Expansion Project from 2008 to 2011.

He resigned from his Project Manager position when Cabinet appointed him to become the General Manager of E.P.C. after the Performance Audit of E.P.C. in 2011.

He also holds a Master of Business Administration from La Trobe University in Melbourne and Association of Professional Engineers, Scientist and Managers Australia (A.P.E.S.M.A).

And a graduate from a Diploma in Public Sector Management with distinction from Massey University in New Zealand.