Tupulua Pelenato; the Head Girl of Fa'atuatua Christian College at Vaitele, is the winner of the 9th Samoa Observer Schools Short Story Competition.

The Year 13 student was congratulated by the British High Commissioner, David Ward, who presented her with her prizes during the competition's prize giving held at S.S.A.B's conference room at Togafu'afu'a, on Friday.

The theme of this year's competition was "COVID-19," where the students were encouraged to write a real or an imaginary story about their experiences. 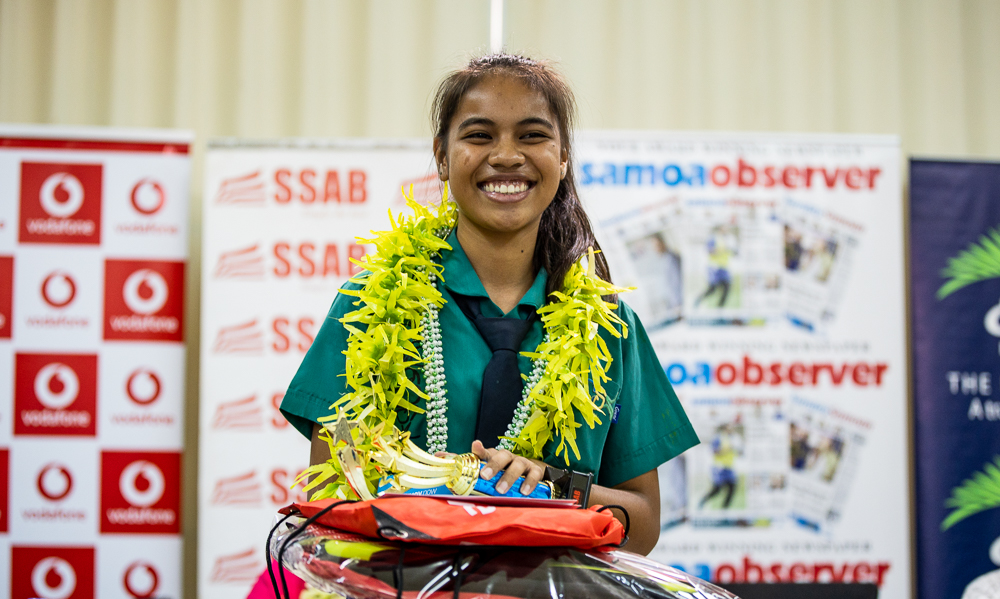 Tupulua won the year 13 English Short Story Category with a story she says is "basically a slice of her life".

Her story is based on the few weeks where schools were alternating between days which she felt was very different when she had to go to school by herself instead of going with her sister. 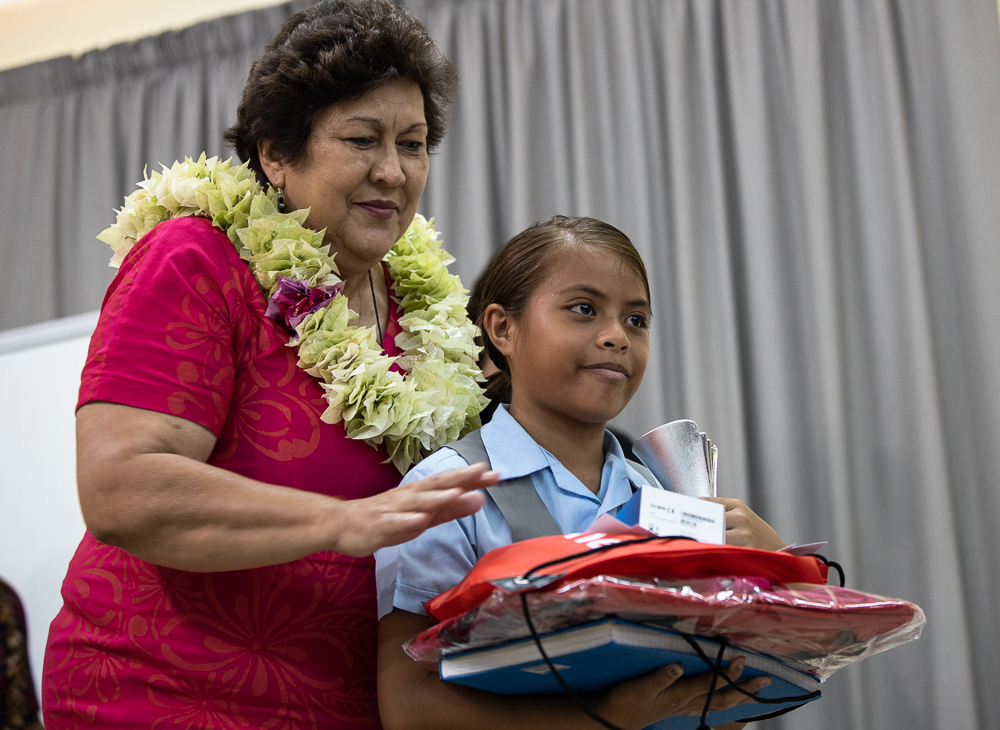 She described in her story how as a leader of her school, she was responsible for separating the students and ensuring that they kept a distance as advised by the government in the state of emergency orders or else their school would have to be shut down.

"This was when schools had first opened up again and it was when the government was really hesitant," she added

"In the story, I had a conversation with my science class. There are only 4 of us because it’s a really small school. 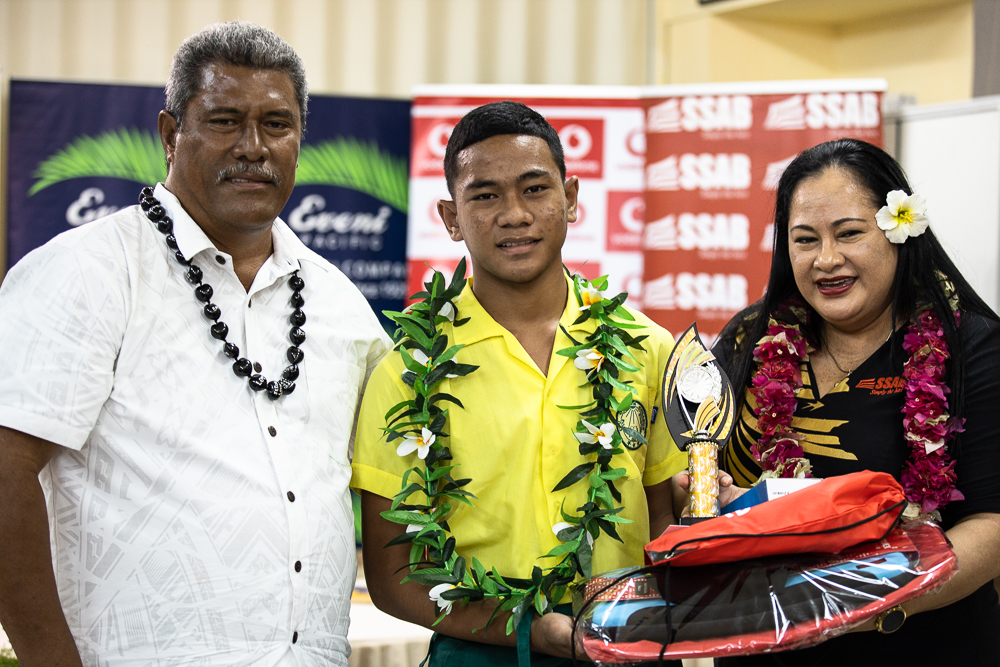 "And in the conversation, we were talking and complaining and whining amongst ourselves about the lack of events that will be in our year especially since there were lockdown and restrictions.

"We were really bummed out about it in our story and then I proceed to go back home, I catch the bus, I see the market and it’s really empty and most of the story I’m in my thoughts and I was letting the people know how I felt and how sad I was but then I was also happy about it at not being in crowded places." 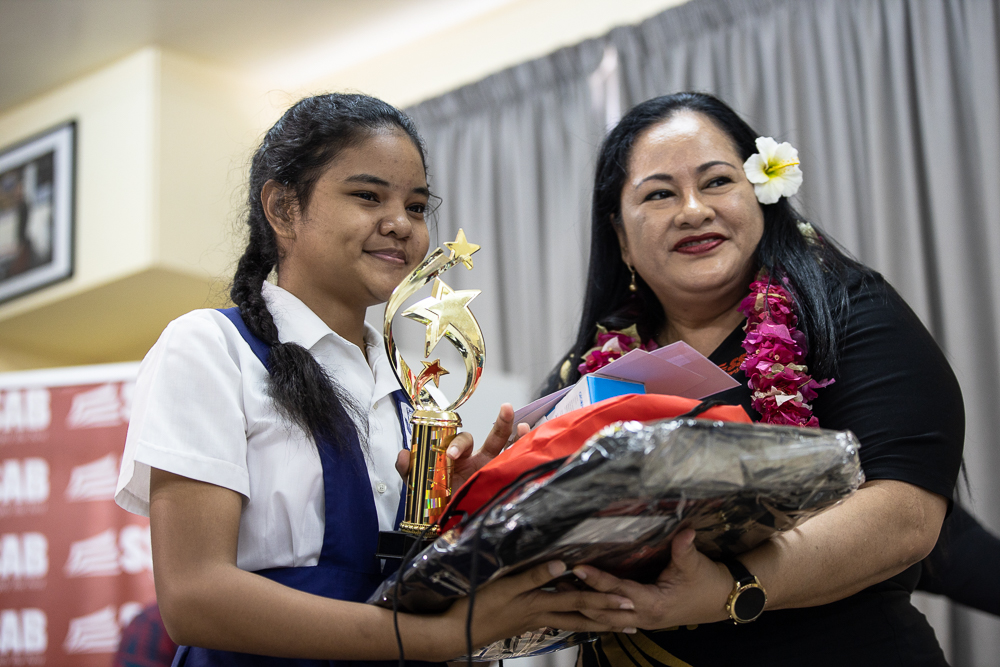 Tupulua has entered a few other short story competitions where she says she usually comes either third or would get a consolation prize.

"So today I just came for the food really," she laughed

"And maybe a consolation prize. They called my grandparents and my grandfather was saying things but usually I don’t believe much of what he says because you know grandfathers they exaggerate and so I was hesitant to believe things, but Praise God! I came here and it’s all good." 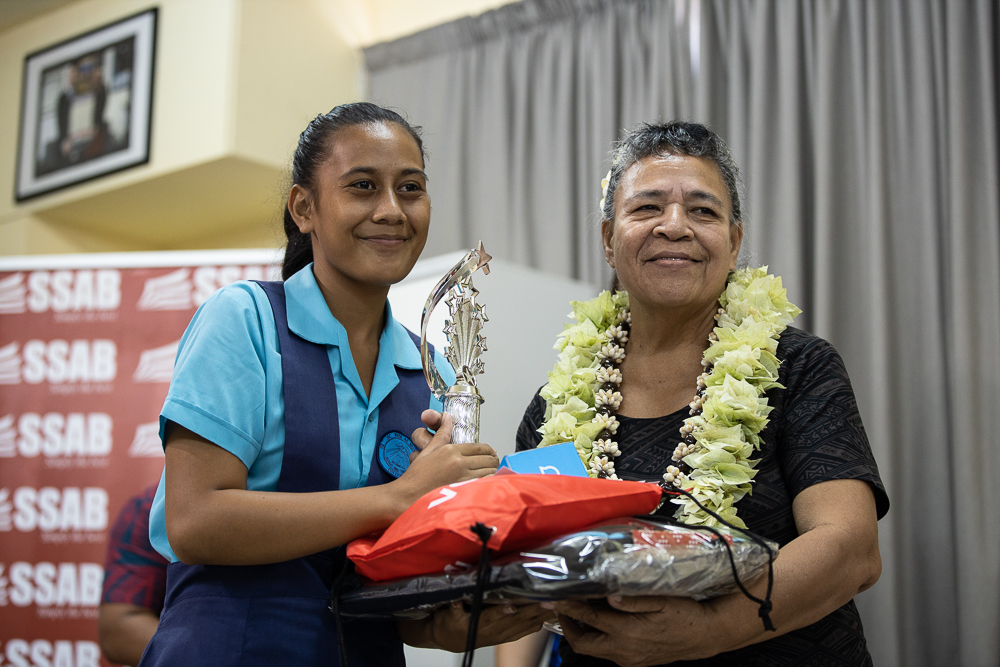 Writing and reading are a few of her favourite hobbies but being raised in Samoa, Tupulua said that they're not really being given the mindset that writing and telling stories would put food on the table.

"So I took Science thinking that there are a lot of opportunities in the field but I reckon I’ll publish a story or two if I get lucky and blessed for extra money but I don’t think it will be like the main career," she said

"Right now, I just want to get a good job. A stable job to help mum and dad out with their scholarship. My parents aren’t working, they’re in Malua actually, so everyone in my family is in school. 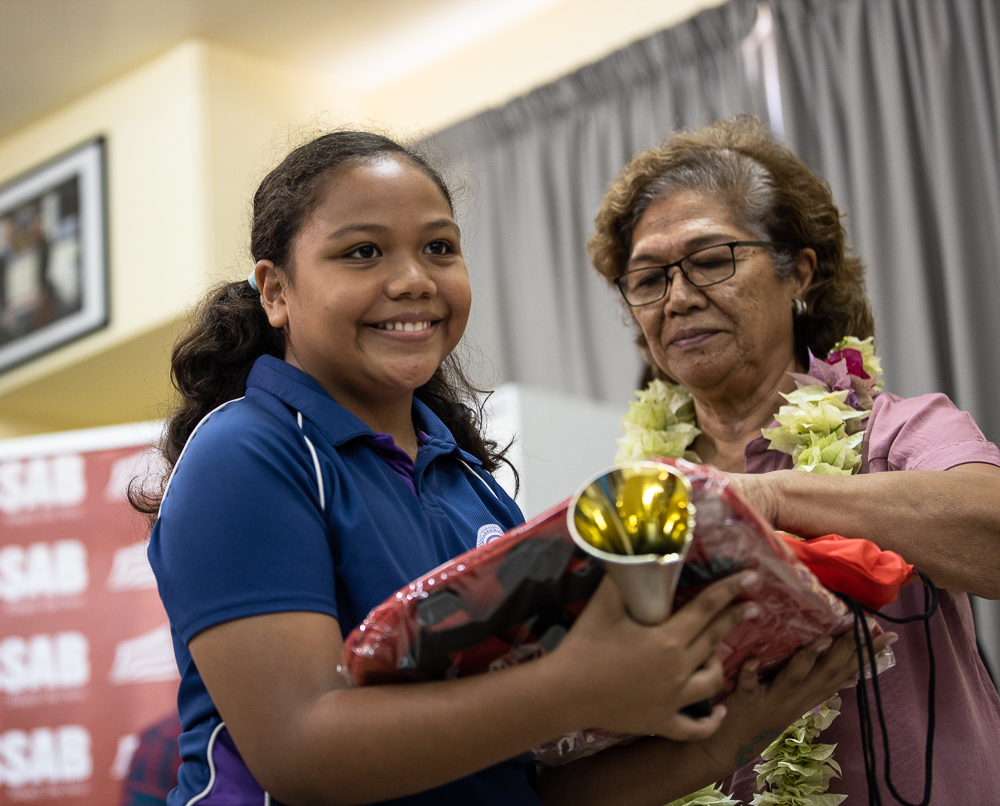 "My dad’s a freelance artist, so he’s landing jobs and that’s how we’re paying our dues right now. So I just want to get out of school real quick and help with the bills."

The competition also saw a number of Savaii entries and winners and one of the categories that the Savai'i entrants took home was the year 9 English category which Mataua Sue from Itu o Tane won. 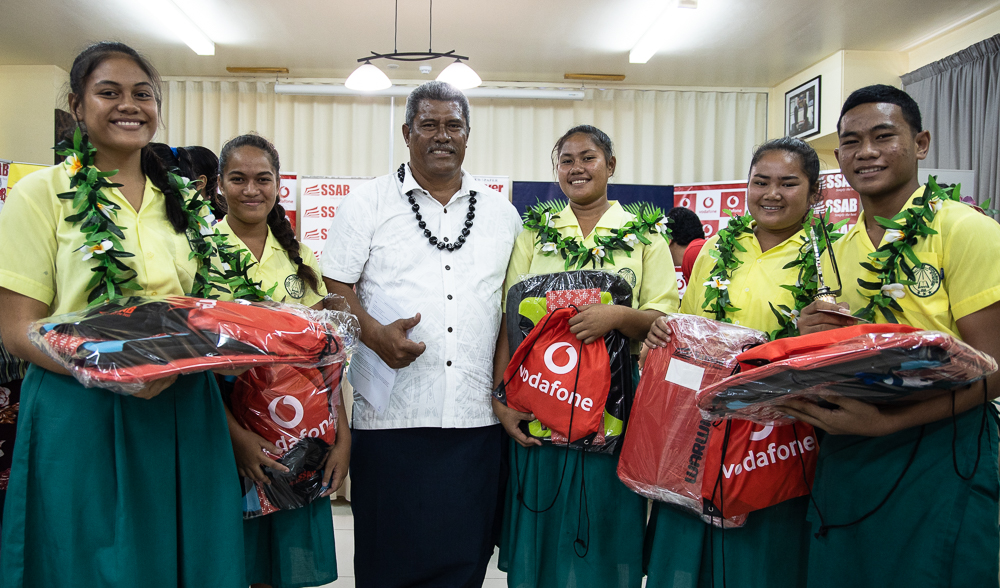 Mataua's family owns a business in Savai'i and she wrote about how the restrictions of the state of emergency affected their family business.

"The reason I wrote my short story in English is because my family owns a business in Savaii and when COVID-19 broke out in the overseas country, our government closed down businesses and then there were no tourists coming into Samoa," she said 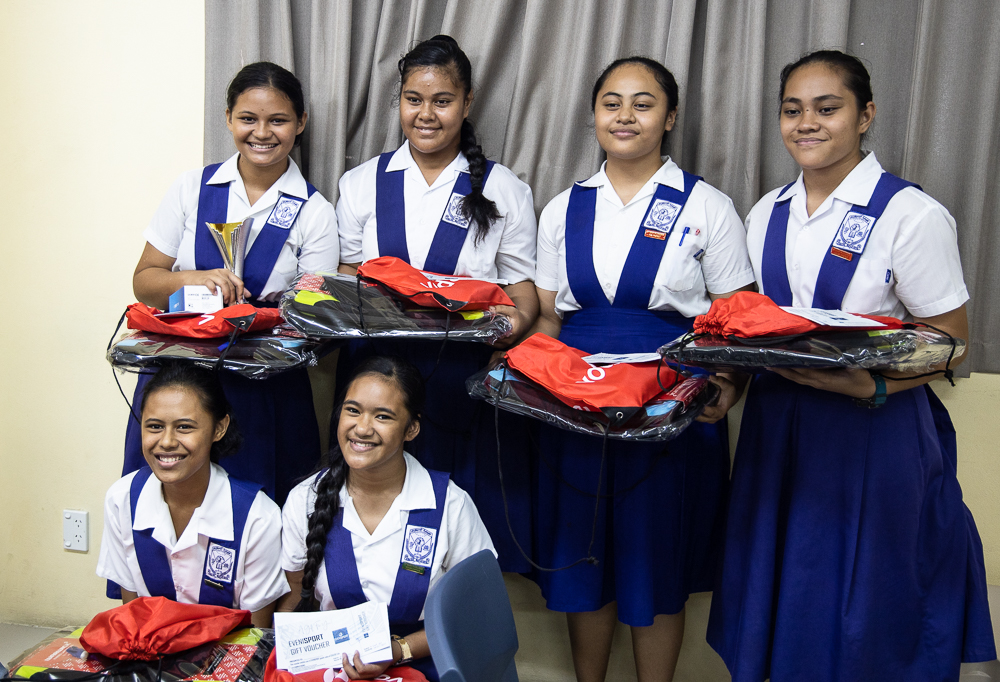 This was her very first time entering into such a competition which she feels very happy about and had thanked her school and parents for pushing her to participate.

Amongst the very proud students and parents were Laufou Alofipo Manase who is the principal of the Itu o Tane College.

He was very proud of the outcome of the competition where five of his students won prizes from different categories.

"This is the usual every year; we missed out last year because I was away in New Zealand during the competition which was why we didn’t participate," he added 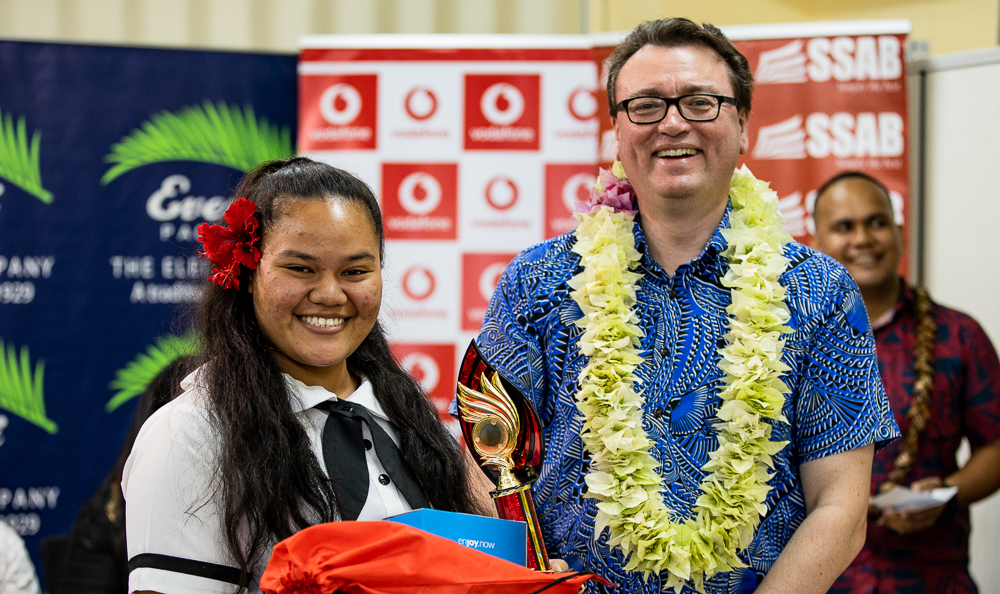 "We have our own literacy and numeracy program and it’s where we heavily encourage the students to participate in such competitions.

"We encourage them to use their creative thinking so they can write their own stories and come up with great ideas."

This year marks the 9th short story competition organised by the Samoa Observer with the aim to improve literacy levels throughout Samoan school.

The English/ Samoa writing competition came about from Editor in Chief of the Samoa Observer, Gatoaitele Savea Sano Malifa who was concerned that students weren't thinking, reading and writing enough.

He wanted to see young people reading for enjoyment and writing freely about their thoughts, ideas and opinions.

According to the CEO of SSAB, Tofilau Fiti Leung Wai, this year is a record as there was a total of 1,315 entries received; 625 in Samoan and 690 in English.

The figures show the increase of interest in the competition and the amount of talent in students around Samoa.

"This year is unique because even though there’s a pandemic, it did not deter us from doing our normal sponsorship and competition," Tofilau said. "It teaches us that there is always hope and the competition has enabled the kids to be more creative in their thinking and that actually came through in the stories.

"There is still hope, it gives them something to look forward to rather than being sad and affected by this pandemic."