The Land Transport Authority (L.T.A.) is still trying "to secure funds" in order to "reconstruct and fix" the Tuiolomum landslide at Lalomanu, Aleipata.

This was the latest update provided by the Chief Executive Officer of L.T.A., Galumalemana Ta'atialeoitiiti Tutuvanu-Schwalger, during an interview with the Samoa Observer.

Galumalemana says it is important that motorists and members of the public are informed about the dangers of crossing the Tuiolomu landslide to get to the other side of the island. 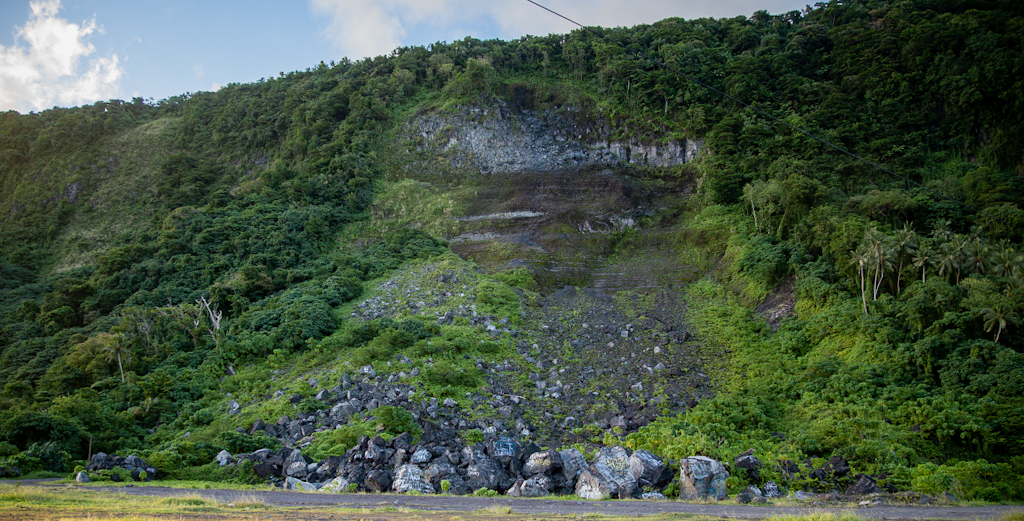 "At this point and time, we have been notifying and warning the public about the current location of the landslide," Galuemalemana told the Samoa Observer.

"Vehicles are able to access and cross the landslide and we are also carrying out maintenance works to make sure that the temporary road is drivable.

"At the same time, we are still trying to secure funds to reconstruct and try to fix this entire area."

The C.E.O. added that they are closely monitoring whether it is still safe for vehicles to cross.

"We will temporarily close this area as we already have an alternative in-land route that the vehicles can use when they are traveling around that area.

"This was the same in-land route that was immediately used after the landslide."

She has also asked for the assistance of Ali'i and Faipule of the villages near the Tuiolomu landslide to assist them in making sure that people who drive and cross this area are safe from harm.

"We ask for the assistance of  Ali'i and Faipule of the villages around this area to keep a close eye on people climbing the rocks as it is not safe for them.

"We also ask the Police for their help in making sure that our people are not climbing on the rocks to graffiti and do such behaviors. We all have to work together for a safer and better Samoa."

On a different matter, the Land Transport Authority Chief has confirmed that they are currently advertising for a consultant to carry out the design work for the Lano bridge in Savai'i and upgrade work on the Afega bridge in Upolu.

"The design supervision, as well as the construction of these two bridges is funded by World Bank under the Samoa Climate Resilient Transport project.

"So until we complete the design, then we can tender out the works to find a contractor who can carry out the construction works for the two bridges."

19,000 plus vaccines administered during lockdown

Preliminary numbers from Samoa’s two-day mass vaccination campaign show a total of 19,567 vaccinations were administered but officials expect the number will be in the area of 20,000 after the data has been cleaned.

A decision transferring responsibility for the enforcement of traffic laws to Police away from the Land Transport Authority appears likely to be reversed, the Police Minister has told the Samoa Observer.