An art exhibition at the Tiapapata Art Centre has put the spotlight on children's voices and stereotypes and the need for the world to listen.

The exhibition on Saturday was attended by the former Head of State, His Highness Tui Atua Tupua Tamasese Efi and the Masiofo Filifilia Tamasese. They were joined by the British High Commissioner to Samoa, David Ward, Vodafone Chief Executive Officer, Nofoasaefa Satish Sharma, UNDP Resident Representative, Jorn Sorensen, and children and guests.

The exhibition was an initiative that began in 2005 by the United Nations and sought art work from children in all its 191 member states with one entry chosen from each one of them. It became a traveling exhibition and 48 of the pictures ended up in Samoa which are now part of the exhibition.

Tiapapata Arts Centre art teacher, Wendy Percival, told the Samoa Observer that they were proud that Samoa and its children were able to make representation in an international art collection.

“I feel that it is very important to children to feel that they have a voice and that people want to listen to them,” she said in an interview.

“And so this is an opportunity for them and we’ve included pictures the students made in our own art classes, and some of them are only three or four years old but they are very excited about the exhibitions.

“Some of them think more globally and are well aware of what’s happening around the world but one thing wonderful about living on a small island is you have the opportunity to get to know and live and work with people from all over the place.”

Mrs Percival pointed to the diversity in the art classes at the Tiapapata Arts Centre and emphasised the benefits of the children sharing ideas.

“We have Samoans in our classes and we also have children from all around the world in the art centre and I think that it’s great to share ideas and get to know each other and feel like we’re more of a global community. So the students are from very diverse nations, large and small and every country from every corner of the world.”

Although the children who created most of the artwork, especially the 48 international paintings in the exhibition, are now adults, Mrs Percival said their work will remain remarkable to the Samoan community. 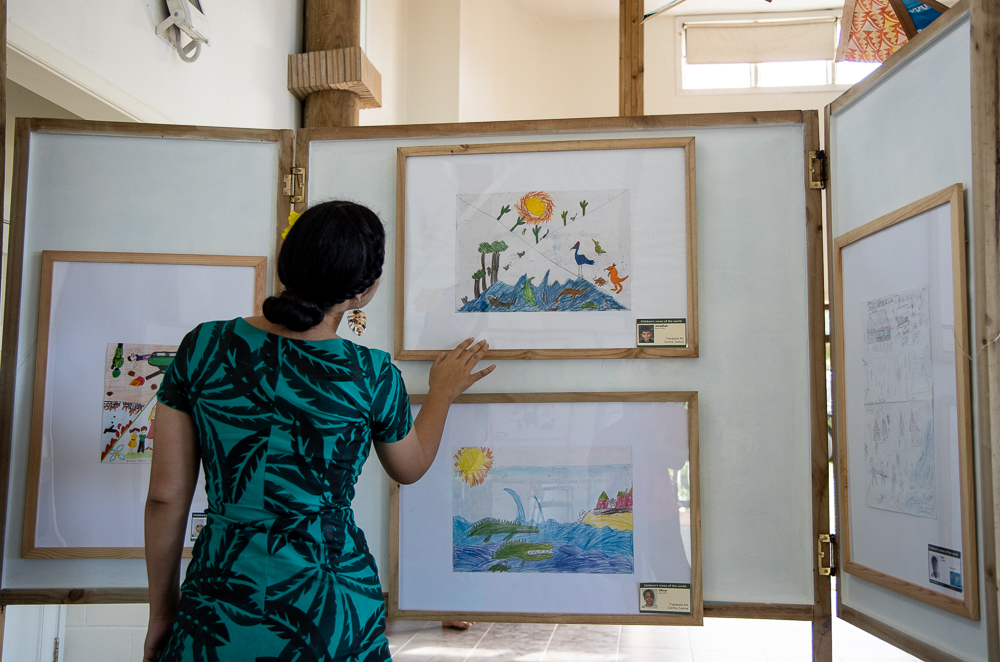 Some of the children’s paintings reflect a grim world with problems and disunity coupled with environmental degradation and climate change impacting on what they see.

While others describe children articulating or expressing very basic simple urges for a better, happy and peaceful world where they see unities between races.

“It’s a very simple message and an aspiration of the young so the problem with the world at the moment as a young person is that they don’t have much of a voice and yet, it’s the young people who are victims of the problems that the older generations have created,” he told the Samoa Observer.

“So if you look at all the problems in the world including the coronavirus, a lot of these global issues, children are victims too, they didn’t create them instead they are victims too and they have no voice.

“So I think it’s a very nice way of allowing the children to have a voice in a society and I encourage families to come to these kinds of shows.

“And so I think it’s always basically giving children a voice, although the children who created most of these works are now adults, because this was 15 years ago and at that time, this is how they saw the world.

“They convey very powerful messages that are relevant today as they are relevant at the time they were drawn.”