The Vaisigano Bridge was opened for public use on Tuesday. (Photo: Aufai Areta Areta )

Residents living on east Upolu returned to school and work from the Father's Day long weekend to be greeted by a brand new $43 million Vaisigano Bridge, which was opened to the public on Tuesday morning.

Although the bridge has yet to be officially commissioned, the Government has decided to open it for use to free up traffic congestion which has become a regular feature at the area since the bridge was closed for construction.

But that was no longer the case on Tuesday morning and it was a welcome reprieve not just for motorists in general but also the business community at Matautu and the surrounding area.

Claire Leota, co-owner of Siva Afi, welcomed the opening, saying it is a much-needed injection to morale and businesses.

“We hope that seven months later things will start to pick up and we get more traffic down here because it’s been really dead,” she said. 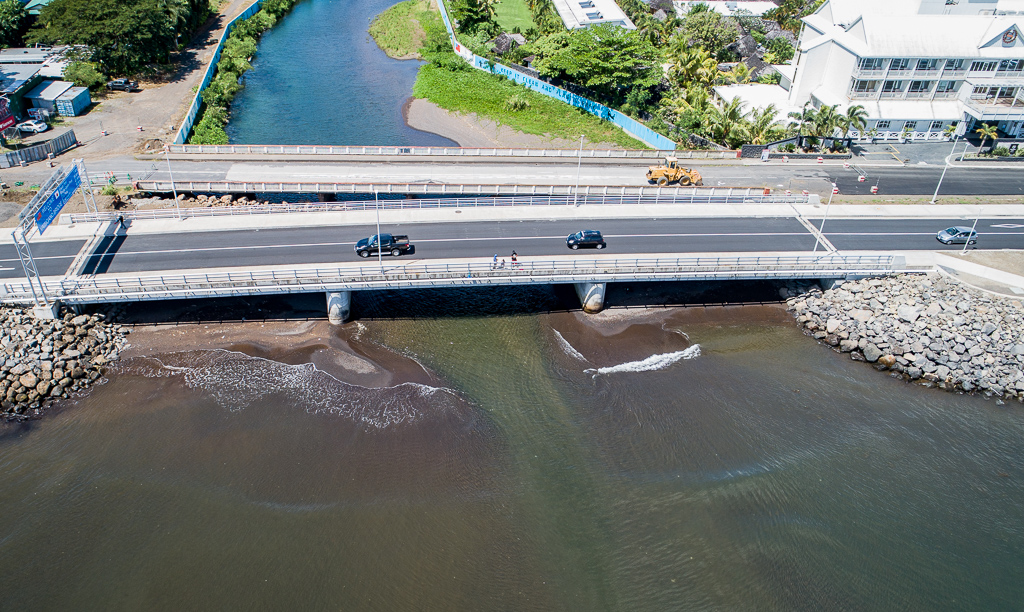 She said the major impact on their business was the restaurant.

“I mean we have all suffered, the Marina, and then Seafood Gourmet closed for several months; it’s just been awful.”

He said on the first day that the bridge was opened, he had a lot more customers.

Before the bridge was opened, he said that it was very hard on his business with less customers because some could not be bothered to drive the long way or because of the potholes from the roads.

A Vaiala resident, Tuulima Laiti praised the Government for another successful project that will benefit the people of Samoa.

“The new bridge will assist with limiting traffic jams because every morning there are so many cars in long queues because there was only one road to use.

“However, I expected it to be a four lane bridge because but it’s not, overall it’s a good initiative.”

“When the bridge closed, it was hard for Scoops especially because you had to go around through the Leone bridge."

She also added that it was a double impact for their business with limited opening hours due to the state of emergency orders.

“We are so thankful to our loyal customers that have kept us going through these hard times.

“And now with the new bridge opening it makes it easier for our customers to come to us.

“A lot of our customers that came today shared their joy of the bridge finally opening and making it convenient for those going to work, school and also just for an easy follow of traffic.”

Construction works for the Vaisigano bridge began in May 2018 by Japanese Konoike Construction company.

Government contributed to the project by way of lease of the contractor's temporary yard, relocation of affected utilities, obtaining relevant permits, maintenance works and exemption of import and duty taxes.