A letter written by the former Chief Executive Officer of the Ministry of Justice, Masinalupe Tusipa Masinalupe, to the Ministry of Education in 2014, giving them the green light to proceed with plans to construct Sagaga College at Le Mauti'eti'e has come under scrutiny.

The Lands and Titles Court (L.T.C.) had recently delivered a decision reaffirming that the Le Mauti'eti'e parcel of land belongs to the Gatoaitele Savea Leulua’iali’i family.

It ended a lengthy legal battle involving family members of Gatoaitele, who petitioned to stop the construction of the school because they had not given consent for the project to go ahead.

But a letter written by Masinalupe, dated 01 October 2014, addressed to the then Chief Executive Officer of the Ministry of Education, Matafeo Dan Aiafi in Samoan, has surfaced, attracting questions about its accuracy.

A copy of the letter has been obtained by the Samoa Observer and it appears that it provided the basis upon which the Ministry of Education granted funding for the project, which has since been stopped.

With the subject matter “About the land at Malaefono in Afega,” the letter assured Matafeo Aiafi that a decision over the ownership of land in question, in this case “Malaefono”, had already been made by the Lands and Titles Court.

Masinalupe said the authority over the land at Malaefono rested with the title Manuaifua of Afega, and that the land was being looked after by Manuaifua Vitale.

“This authority has been recognised by the Court as per the decision of the President (of the LTC)” the letter reads.

But an investigation by the Samoa Observer has found holes in the claim about “Malaefono.” Aside from the letter referring to an incorrect piece of land at Afega, it has also emerged that there was no decision on Malaefono as the letter referenced. 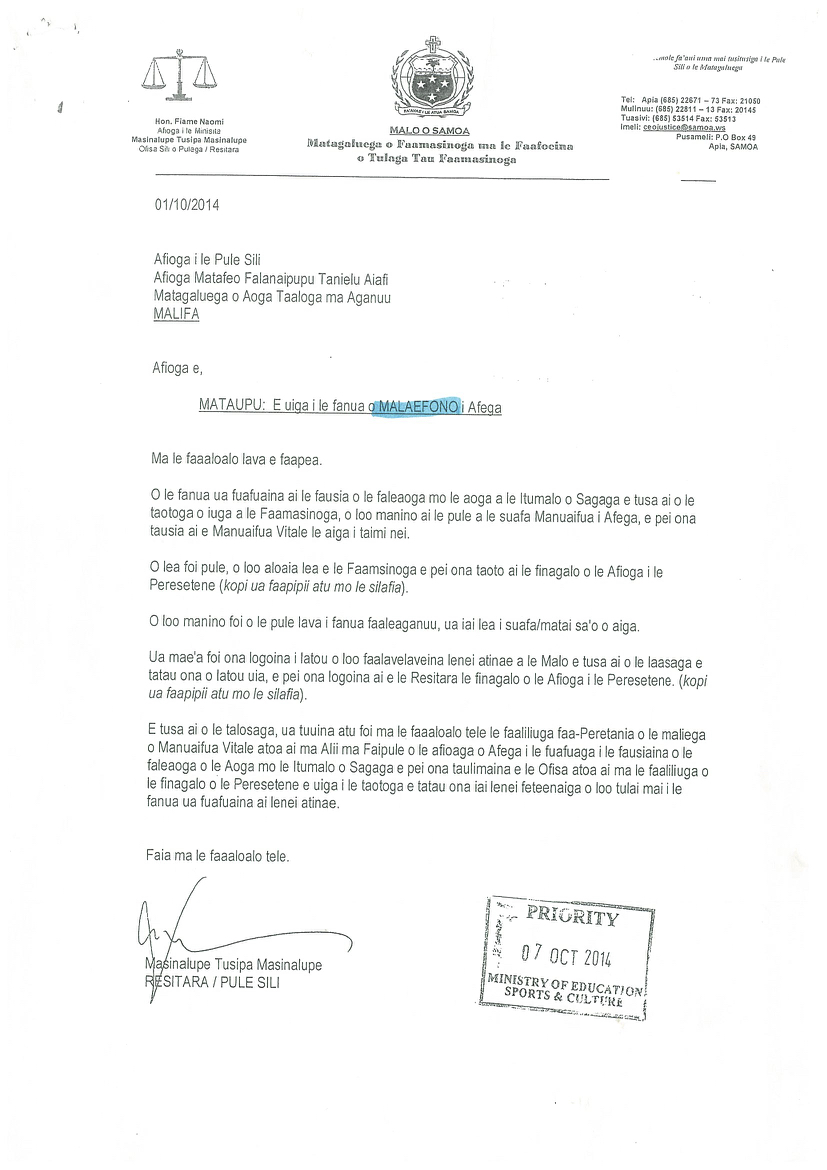 Fata Ryan Schuster, of the Gatoaitele family, condemned the letter saying the Government should have never considered it.

“M.E.S.C. acted based on this letter and yet if the government did a thorough investigation, they would have found out that it was not true," Fata said.

“The subject of this letter referenced Malaefono, but the supporting documents they referred to the Sogi land and I am surprised that at the time this did not raise any red flags."

The Malaefono does not belong to the Manuaifua family, it is owned by Seuseu family and Fata Paulo Pemita will attest to that fundamental fact, Fata Ryan said.

“I grew up in Afega my whole life, the Malaefono land is across from our land LeMautietie [where the school is built] it belongs to the Seuseu family,” he said.

Furthermore, Fata pointed out that their family has no intention of removing the Sagaga College from their land.

But they just want the truth and for things to be done properly. 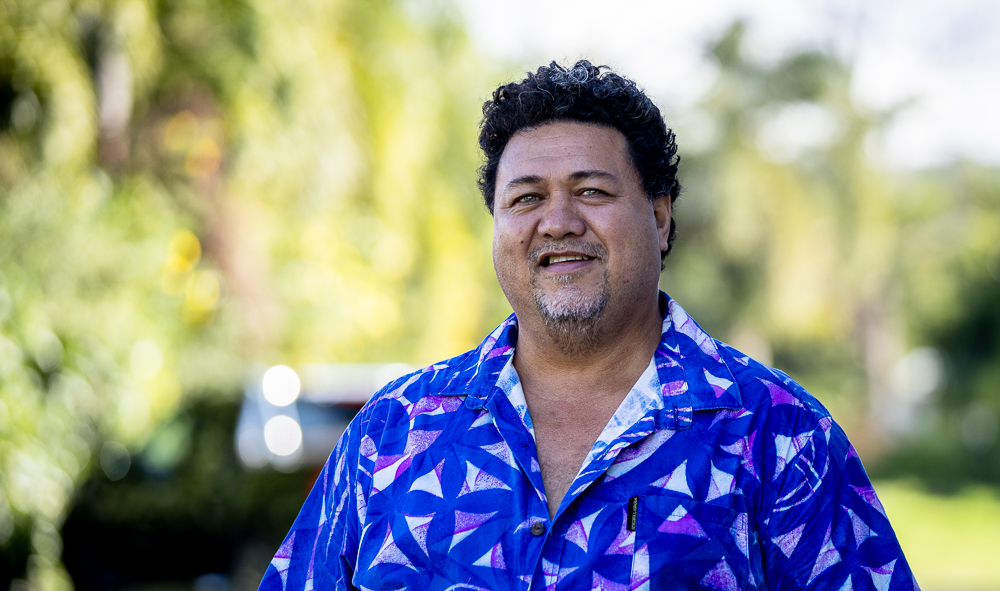 "This letter led to the building of the school on our land which the court has now ruled, belongs to our family," reiterated Fata Ryan.

Contacted for a comment, Masinalupe referred queries to the current Chief Executive Officer of the Ministry of Justice and Courts Administration, Moliei Simi Vaai.

“That letter was penned during the time I was the [Court Registrar] and therefore all queries must go to the current Registrar,” Masinalupe said. “At the time I was Registrar. I assumed all the responsibilities of my previous predecessors and as it should, therefore I cannot comment but ask [Moliei]. If she wants clarity she can reach out to me.”

When Mrs. Vaai was asked, she referred the Samoa Observer’s queries to an Assistant C.E.O. of the M.J.C.A., Leugamata Faletolu Lofipo. Contrary to the claim by Masinalupe in the letter about Malaefono, Leumagamata Faletolu confirmed that there was no ruling issued by the Lands and Titles Court in connection to “Malaefono" at the time in question.

Manuaifua Vitale was not available for a comments when he was contacted.

But Fata Paulo Pemita said the “Malaefono” belongs to their family and that land was “never the subject of any L.T.C. case.”

"To date, our family land Malaefono was never subjected to a case before the Lands and Titles court. That is wrong and it is not true,” he said.

Two years after the letter from Masinalupe, Cabinet approved $50,000 to assist with the building of the school. 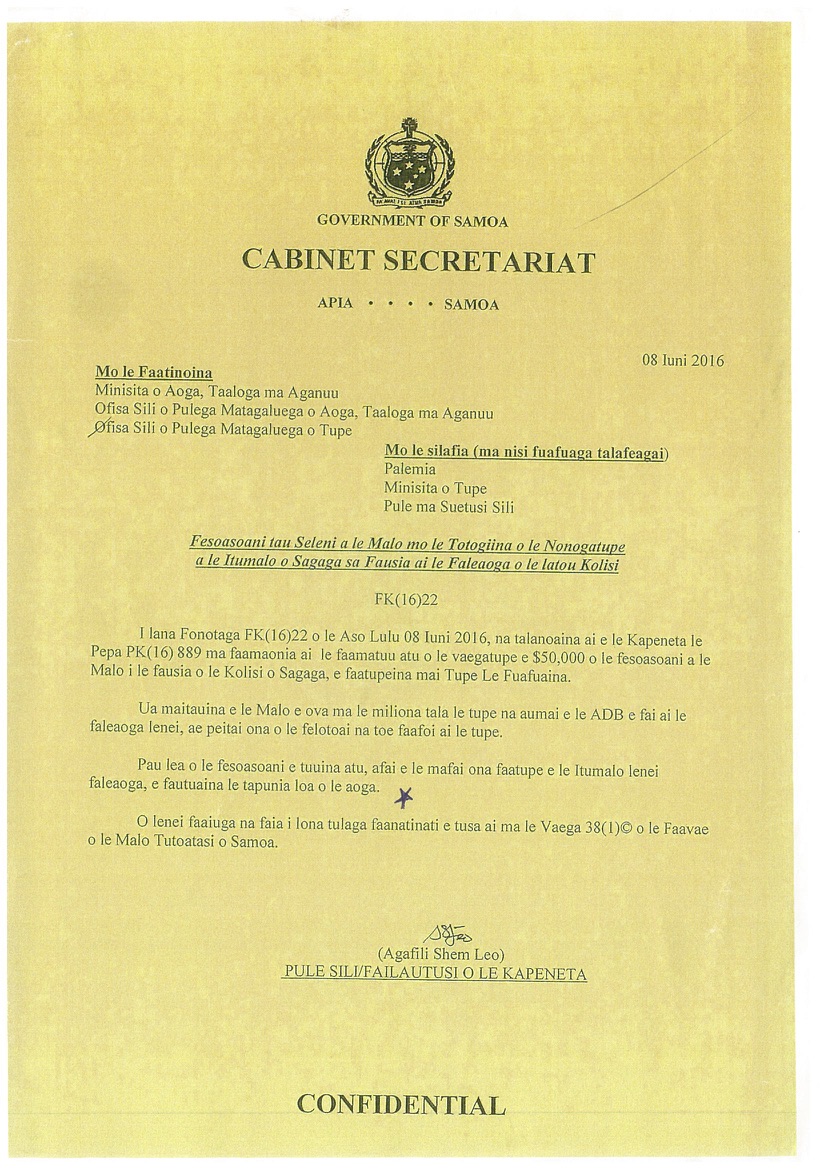 “More than a million tala was allocated from the A.D.B. for the building of the school, however due to the dispute the funds have been returned,” the Cabinet paper reads.

“This is all the funds the government will give for the school building, if the Constituency cannot fund the school, they should close it down.”

The Minister of Education, Sports and Culture, Loau Keneti Sio, who took over the portfolio in 2016, declined to comment on the matter.

Talks about the Sagaga School started in December 2013 when the Government promised to donate $1.5million to relocate the College from Tuanai to Afega during the celebration of the school’s 50th anniversary.

But problems soon surfaced when heirs of Fata Pouvi objected to the plan by the school’s principal negotiator, Maulolo Tavita Amosa, to build the school on the land, which the Court recently ruled on.

In 2015, family members of Gatoaitele Savea Leulua’iali’i moved to stop the construction on Le Mati’eti’e, claiming that the land belonged to them. The proceedings lasted five years in the L.T.C and they succeeded.

The Court has ruled that the owners of the land must be asked for their consent before any further developments is built.

The recent Court decision about Le Mauti'eti'e is being appealed.

The International Day of Peace was commemorated at the National University of Samoa's Peace Garden on Monday evening.

The Samoa Rugby Union (S.R.U) has begun the registration and orientation of players for its Lakapi Samoa Championship. The players also heard from Manu Samoa coach, Mapusua Seilala Mapusua.