The Samoa Ports Authority (S.P.A.) presented its fourth dividend of over $3 million to Prime Minister, Tuilaepa Dr. Sailele Malielegaoi on Monday, in its role as a state-owned enterprise.

But the challenging economic conditions facing the nation did fail to dent their contribution.

The organisation derives much of its revenue from cruise and other ship docking fees which have all but closed to a complete halt due to the global coronavirus pandemic and the pausing of the international tourism industry.

Tuilaepa revealed that the amount presented will be used to erect and construct a scheduled new lighthouse. The Apia City lookout and work is scheduled to start before the year ends.

The cheque was presented by the S.P.A. Deputy Chairman of the Board of Directors, Tuatagaloa Shane Wulf, on behalf of the Minister of Works, Papalii Niko Lee Hang, the Board, management and staff.

The dividend accounts for 35 per cent of the S.P.A.’s audited net profits of $8.7 million for the most recent Financial Year.

The S.P.A.’s General Manager, So’oalo Kuresa So’oalo, said the downturn in the Authority’s activities started with the measles epidemic followed by the sudden lockdown caused by the global pandemic.

He did not specify how much in revenue was foregone by the S.P.A. but noted that the Government’s decision to keep the wharf open for trading enabled the Authority to continue to collect expenses. 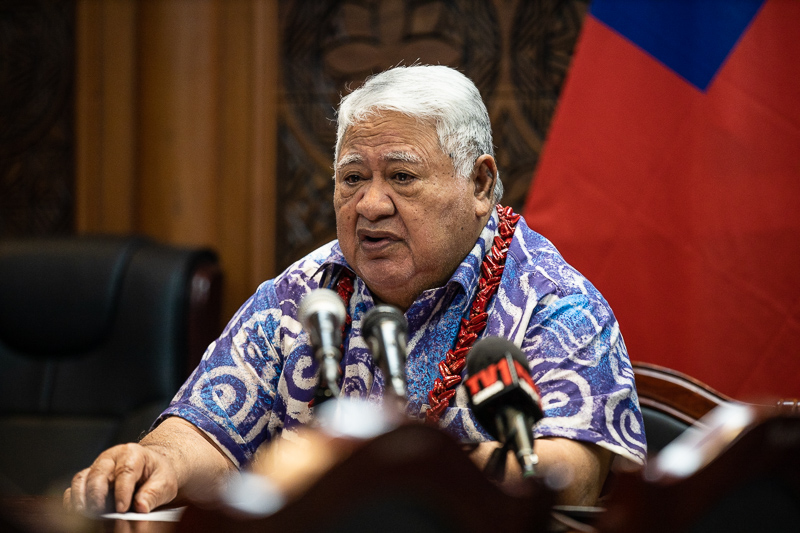 Speaking after the presentation, Tuilaepa thanked the S.P.A. on behalf of the Cabinet, highlighting the importance of dividends from state-owned enterprise to national development.

The new lighthouse is one example, Tuilaepa said, of a greatly needed project.

“Right now with our higher buildings, it is hard to see the blinking light of the lighthouse. Which is why discussions have been laid to ensure the safety of ships coming into the city,” he said.

According to Tuilaepa, the Government has already purchased the land needed for the project on Mt. Vaea from the Catholic denomination.

The Prime Minister challenged the Authority to continue working hard as they will be the main funders of the lighthouse and Apia Lookout project.

The iconic cross, which has previously been revealed by the Government to be the shape of the new piece of infrastructure, will be made of metal and “as high as the clouds in the sky”, Tuilaepa said on Mondsy.

“This will be the icon of Samoa being a nation founded on God; the cross that stands out on heights on Mt. Vaea telling people this light is the navigational aid for maritime pilots at sea into the sea into safety as the cross represents the safe journey of all Samoan spirits into the safety of Eternal Life,” he said.

“Named as the Apia City lookout – the way of the Cross - the place will be used for peaceful meditation in the Word of God, and for families and visitors travelling to Samoa to view the landscape of Apia City during the day and at night.”