The Mapu-i-Pulotu Home for the Aged Charity Group in Savai'i has received a $5,000 donation from the Bank South Pacific (B.S.P.) Samoa.

"This is part of our community outreach to assist our communities with whatever they project they are working on," said Taitu'uga.

"We hope this [money] will help you guys out with the project your association has started."

Taitu'uga also praised the initiative to start such a project in Savai'i which will have long-term benefits for the island.

"This is a good project and it will benefit our people in Savai'i, malo lava for starting this work."

In accepting the donation, Tuilimu thanked the General Manager and her banking staff for their generosity.

"We express our sincere gratitude for this kind gesture," said Tuilimu.  "This is unexpected and it's not everyday that we get this kind of help so from the bottom of our hearts, we thank you."

Speaking about the project, Tuilimu said the idea to set up a facility for the elderly on Savai'i was something the association agreed upon.

The Mapu-i-Pulotu Home for the Aged Charity Group is made up of students who attended the Logo-i-Pulotu College at Vaiaata in Savai'i. The college was officially closed down in the year 2000.

But after he passed away they started to look for another project “to make good use of the money we already raised”.

They decided to devote their efforts to the home for the aged and started the project with money they had raised within a period of less than five years. 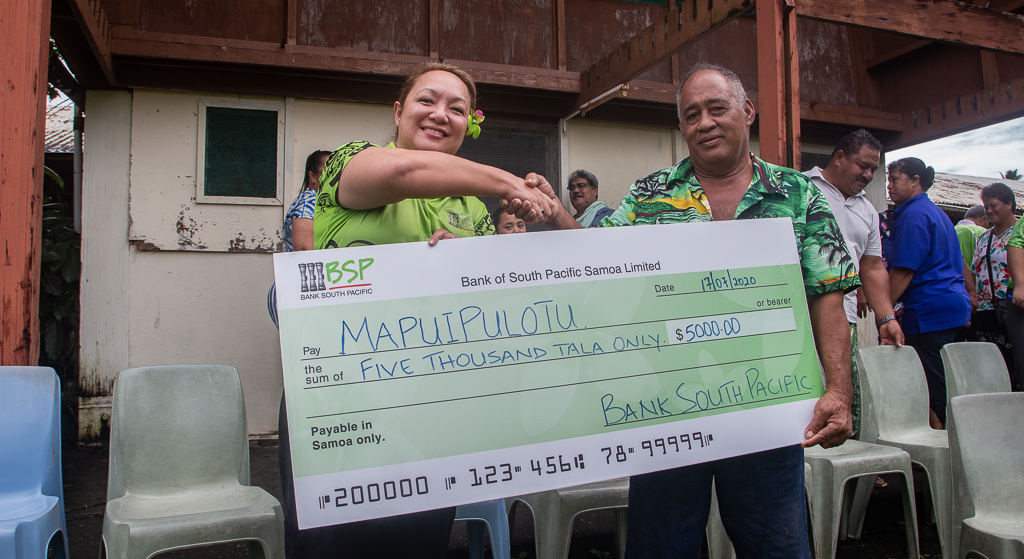 Moreover, Tuilimu said this is also the beginning of a partnership between the association and the bank.

"We will continue to work together and we look forward to invite you all here, God willing, when this project is completed.

"May God bless you all and we thank you once again for your generosity."

The facility will be the second home for the aged in Samoa but will be the first on the big island of Savai'i.

It will include 24 rooms with ensuites, a renovated kitchen, and the renovation of the other facilities at the venue.

The project has been approved by the leader of the Catholic Church in Samoa, Archbishop Alapati Mataeliga.

The work has started and the first wing is nearing completion. As the project is self-funded by the Association, they are welcoming any organisation or individual who is willing to help them complete the project.

"We appreciate anyone who would like to donate and assist us in completing this project," said Tuilimu.

"We are not building this for us only; this is something we want to do for our elders not only in Savai'i but also Samoa as a whole.

"Therefore, whoever wants to help and donate will be very much appreciated."