What a week. One day it’s raining, the next day the sun is shining brightly in its full glory with the temperature at melting point. Depending on a person’s needs, the changing weather patterns can be a blessing and a pain.

But such is the nature of this journey we call life. There is the good, bad and the not so good. It goes without saying that life cannot be good all the time. Indeed, there are mountains and then there are valleys but there is always a silver lining, which is what motivates most of us to keep going.

But it’s not just the weather in Samoa where the thermometer has been a mix bag. The political climate has just been just as interesting and as far as developments go, it’s been quite a week. What with the movements within the ruling Human Rights Protection Party (H.R.P.P.) down at the Petesa Hall and the excitement created by the upcoming General Election, there is a sense of anticipation in the air.

On the front page of the Samoa Observer on Saturday, we saw the announcement of the retirement by veteran politician and Speaker of Parliament, Leaupepe Fa’afisi Toleafoa. For most of us who have followed Samoan politics religiously, the name Tole’afoa Faafisi alone has become part of Samoan political furniture so to speak.

His resignation will certainly bring the end to an era.

“The time is right to call in my retirement so I can enjoy quality time with my family,” said the 73-year-old Toleafoa, who has been in Parliament for nearly 30 years. With his exit, Leaupepe’s son, Aiono Afaese Toleafoa, is preparing to follow in his father’s footsteps should he win the A’ana Alofi No.1 contest at the 2021 General Election.

“Aiono is ready and eager to serve while I enjoy my retirement,” Leaupepe said. “We need the young minds in Parliament and now is time for the young generation.”

Well the sentiments of Leaupepe are words of wisdom. There is a lot to be said about influential people and great men and women who understand and know their time and seasons. They know when they are called and when the time comes to move on.

Nearly thirty years of service to Samoa in many different capacities is not a small feat. While Leaupepe is not perfect, like all of us; his service to this country deserves acknowledgement and gratitude. We thank and acknowledge him ahead of his official retirement. We can only pray for his good health and strength.

But with the end of an era is always the beginning of another. Speaking of which, it has been wonderful to see so many new candidates putting their hands up to enter the halls of Parliament through the General Elections next year.

As expected, the H.R.P.P. has already clocked up more than 40 new candidates since their registration started in Upolu. This number will only increase in the coming weeks when the party’s registration process moves to Savai’i. Combined with H.R.P.P members who are already in Parliament, the party’s list is likely to hit close to 150 candidates by election time.  Which shows just how dominant the H.R.P.P. has become, and possibly an early indication of how the election will pan out.

Logic and common sense tells us the H.R.P.P. should win and win comfortably. This is what they have been doing for the past 37 years with the 2016 General Election being their most comprehensive victory in history.

It would be remiss of us to discount the recent developments in terms of political dissent and what that could mean when the nation heads to the polls next April.  But it is too early to make sweeping predictions. Only time will tell.

Looking ahead to next year, it is likely that we will have hundreds of candidates from different political parties vying for those 50 seats at the Maota Fono, Mulinu’u.

We have already seen many familiar faces, some old faces and some relatively new faces. Which is all part of the fun. Setting aside political party agenda and motives, this is genuinely a compelling moment for all these candidates. It’s not just an anxious moment for them; it is also an exciting time for their families, churches and villages.

But General Elections are not just about political parties and candidates.

While they are a key part of the equation, the most important ingredient in what makes a functioning and active Parliamentary democracy is you, the voters.

It is your vote and your choice inside that ballot box that determines your future and that of your children, family, village, constituency and country. The wise words of French Philosopher, Joseph de Maistre, always ring true when he said: “In a democracy, the people get the government they deserve.”

Have a wonderful time with your families and loved ones this Sunday Samoa, God bless! 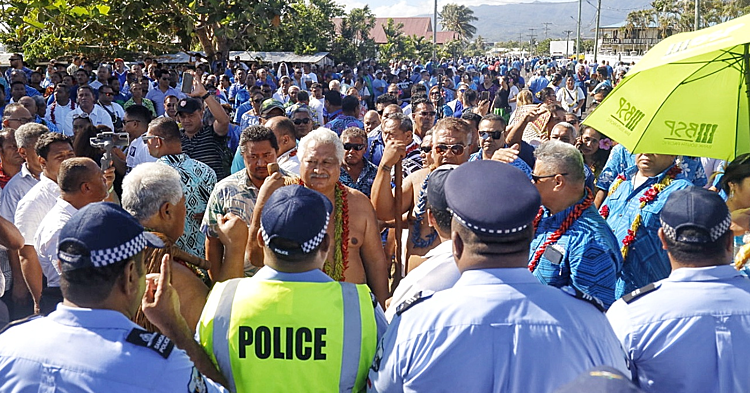