Speaker of the House, Leaupepe Fa’afisi Toleafoa is to retire after this term. (Photo: Aufa'i Areta Areta)

After serving for close to 30 years in Parliament, the Speaker of the House, Leaupepe Fa’afisi Toleafoa, will retire after his sixth term next year.

“The time is right to call in my retirement so I can enjoy quality time with my family, but I have not informed the Human Rights Protection Party (H.R.P.P.) of my decision to retire,” he told the Samoa Observer in an interview.

His son, Aiono Afaese Toleafoa will, however, seek to follow in his father's footsteps. This week he registered to contest the next general election in his father’s constituency for the H.R.P.P. in the April 2021 election: A’ana Alofi No.1.

Leaupepe, who is 73 years old and served as Speaker of the Legislative Assembly on two separate occasions, first entered Parliament in 1991.

He was first appointed as the Deputy Speaker and became the Speaker for the first time in 1996 for two consecutive terms until 2006.

He then served as Associate Minister before returning to the Speakership in 2016.

“I was called back to my role as Speaker, to maintain order and to uphold the integrity of Parliament during sessions,” he said.

“There was an issue pertaining to the language used during [Parliamentary] sessions hence the need for me to take back the role.”

He said the challenge of the role was maintaining order during often unruly debates on the floor of the chamber.

“Whenever there is a disagreement, I silently pray to God for guidance and from there I make my rulings and decisions. I seek God’s direction when there is disorder in the Chamber and once I make my decision I don’t turn back,” he said.

“It is a difficult task, as many may consider, but God’s course I was able to make hard decisions without hesitation.”

The highlight of his tenure, he recalls, is being able to send Members of Parliament overseas for training, seminars and meetings.

“And this benefit is now afforded to the [Office of the Clark of the Legislative Assembly] staff which is a huge improvement over the years,” he said.

“They can work at the same time further their education and attain higher degrees making it easy for the staff to achieve promotions within the office.”

Asked for the secret motivation that kept him in Parliament for 30 years, Leaupepe nominates one word: “family”. 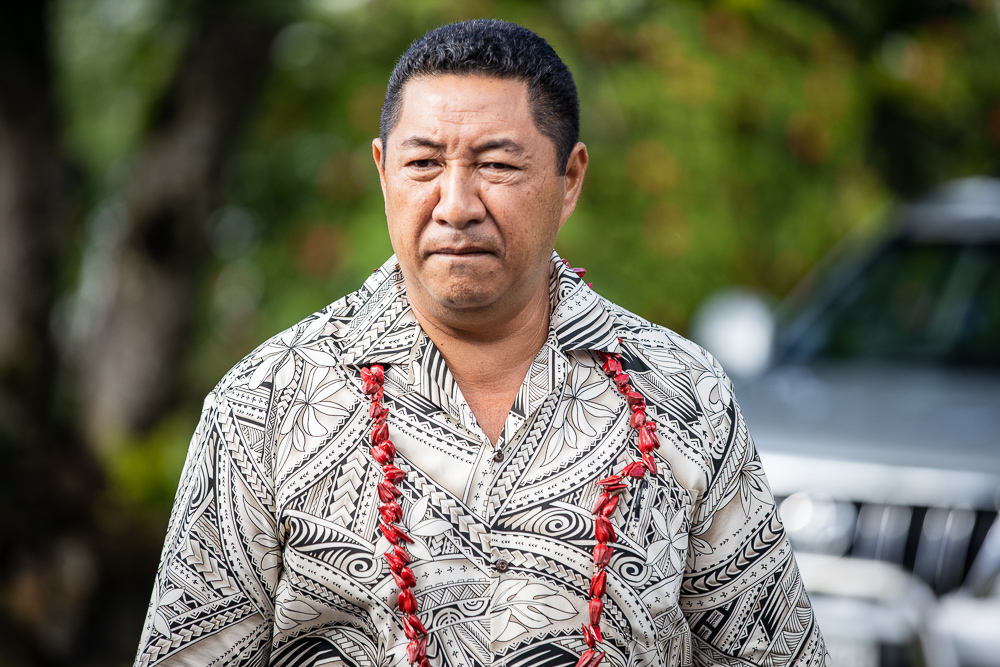 “I say family because if you can maintain order in your family, you can do the same for the church, your village and in broad your constituency,” he said.

“Being a Chief is one of the best achievements [in which] I succeeded in life and from there I felt the urge to serve my people through Parliament.

“The rest was history.”

He then references comments from his classmate, the former Chief Justice, who said when a westernised judiciary arrived, Samoa already had their own system of justice in place, in the villages.

“Today we have the three pillars of government and its mandate, the Executive, Judiciary and the Legislative and these were the core functions of the village council which started since the beginning of time,” he said.

“They governed through rules and policies in place for each respective village and they assisted with development [such as through farming and fishery] and they maintained order.

“My point is when a Chief sits in the village council, they learn from the Chiefs and by the time they enter parliament, they know what to expect.

“And so the functions of the three arms of government are mastered and governed by the Village Councils.”

The Speaker said he was proud of his children who managed to secure scholarships as mechanical engineers.

According to the Speaker, at one time their family transport business, Queen Poto, had 45 buses which were all of the Toyota brand.

“The President of the Toyota Company came from Japan and reached out to my family as one of their loyal customers and asked me as to what the company can do for our family.

“The President assumed that I [would] ask [him] to reduce the price of the vehicles, but instead I asked him to fund scholarships for my sons so they can attend [mechanical] engineering school so they can fix our [vehicles] when they break down, the request was granted.

“To date, my sons are the best mechanics we have on this island and they cater to our business. Of my decisions, I am proud of this because I know our family will benefit in the long run.

“Again if you can manage your family affairs, you can do anything.”

Toleafoa is married to Na’oupu, they have five children and close to 20 grandchildren.

The Speaker said his wife and children stood by his side throughout his political career.

Leaupepe said it was time for his son, Aiono, to enter the political arena.

“I am not saying that he will be appointed the next M.P. from our constituency, but Aiono is ready and eager to serve while I enjoy my retirement,” he said.

“It is time for Aiono to serve the constituency and the government by entering Parliament. We need the young minds in Parliament and now is time for the young generation.”

The Speaker’s son, Aiono is the Managing Director for the Toleafoa Company which operates one of the largest chains of public transport, gas stations and supermarkets across the Country.