The names behind the local hit "Tele Fetu"

The song is a cover sung in Samoan of a song called "Rewrite the stars", which was part of the soundtrack for the movie “The Greatest Showman” and was sung by American actors and artists Zendaya and Zac Efron.

Mr. Segi, who wrote the Samoan cover’s lyrics, told the Samoa Observer that his passion for music started when he was young.

"When I was young, I really loved singing. When I started in College then that is when I started to play rugby because I am a person that loves sports," Mr. Segi said in an interview.

"After a while of enjoying sports, I started to forget about singing and a lot of people tried to convince me about singing but sports was always on my mind. When I was injured from sports, the doctor told me to be careful. Then I heard Uili opened a studio then I came here and recorded a song with one of my younger brothers."

Putting pen to paper, he wrote the lyrics for the Samoan cover which he self-titled "Tele Fetu" and then began the search for a female vocalist.

"I came to the studio and talked to Uili and he mentioned a girl named Tacy who is recording her songs here. I also knew Tacy because she competed in Star Search in 2017 then I contacted her about the duet," he added.

During the course of writing the song’s lyrics, he believed that the song would have a huge following as he believes that things will be great if you believe in yourself.

"Lyrics are really important. I don't use any difficult words. It was made for people to understand it easily," he added.

Following the unveiling of the song and the success that followed, the musician said he owes it to his parents and his brothers for helping develop his singing talent as well as music producers Uili and Sam and Tacy who he is now working with.

He also thanked his wife who is now seven months pregnant.

Ali'itasi Su'a Toauma told the Samoa Observer that she was shocked when she was recommended for the song and was also surprised by its growing popularity in Samoa.

Her passion for singing began when she was young and would sing songs from the movie "Sound of Music" with her grandfather,  but she did not take singing seriously until she was 14 when she joined a band.

Ms. Toauma said she believes that their song's popularity is due to how it motivates the fans to believe in themselves.

"You have to believe in what you do, sometimes you doubt what you do so much." Believe in yourself, motivate yourself that this is going to be a great thing," she said.

While recording the song, she said she felt the lyrics as it had so much meaning. 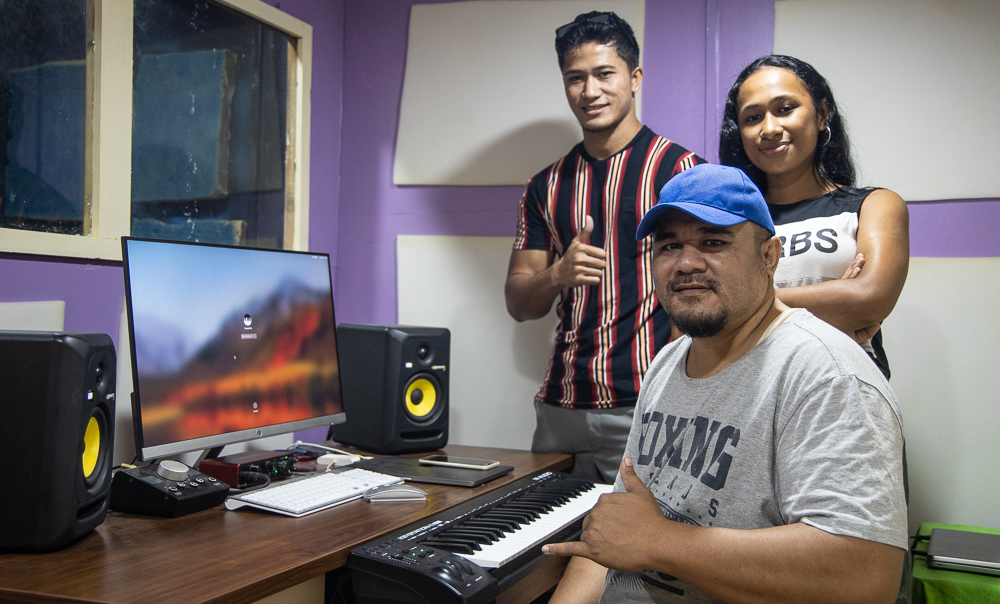 "Singing is about the message that you give, the spirit that you give. What you try to put out there for people to hear, it's all about soul. It's like you are delivering a message for people.”

She emphasised that she plans to work with Mr. Segi on more duets but will also be producing singles depending on the type of music they love.

"We are going to do our own type of music like the type of genre that we want. There will be a time where we do our own thing individually. My favorites are R&B, Jazz and Blues," she said.

She said she would like to bring more attention to jazz music in Samoa and added that not a lot of people listen to jazz.

Thanking her family and friends, Ms. Toauma highlighted Pesega Boe for their support as well as her parents Su'a Ilai and Eseta and her Uncle Junior Toauma and grandmother.

"This singing thing would not be out here if it wasn't for my mom, she would always encourage me," she said.

The man behind the music production, Uili Lafaele Junior [Pesega Boe] who runs Pesega Records Production, told the Samoa Observer that he sees the huge potential in both Mr. Segi and Ms. Toauma.

"Segi is one of the pioneers of my studio. The original studio was in the house and it was him and his little brother who were one of the first when I had just started to produce music," he said.

Mr. Lafaele emphasized that as a music producer, a person's voice has to be good and the right type of voice in order for the song to be produced.

He explained that both Mr. Segi and Ms. Toauma have unique voices.

"That is the reason why I was interested in helping them in their song Tele Fetu is because their tone is unique," he said. "My aim is to help these artists reach a higher level. I pick the person because of their tone. It is not a tone like the other people we usually listen to such as a regular tone that you would hear."

He is also working together with the artists to promote their music on social media as this will give them further exposure to the overseas music industry.

"My work is not only producing the music but it is also putting it on social media for people to know about. Some of us don't know that we can make money on social media,” he said. “For example, I am advising Segi to create a YouTube channel to upload his music and monetize it. That is another way he can help his family.You can earn a lot of money from YouTube.

"Segi has a reputation, a lot of people follow his music so social media is another path."

Mr. Lafaele revealed that Mr. Segi would be taking part in a tour with a band in New Zealand in the near future, but the event has been delayed due to the COVID-19 pandemic.

He added that the tour will give his singing career more exposure.

"Tacy has a huge potential to be able to move up to another level. That is why I am looking forward to these trips to New Zealand, because there might be New Zealand music producers at the concert that might promote their music. It is true that they are popular here now but the market for this type of stuff here is not big enough," he said. "If people talk about music here then it is just for listening but it is a big thing overseas."

Mr. Lafaele stated that he knows that people are blessed with different talents, and he urged youth who have a singing talent to reach out to him, as he might be able to assist them bring out their own talent.

A driver falling asleep at the wheel is believed to have caused an accident involving a silver Noah Van running over SouthPac Rentals’ iron fence opposite the traffic lights at Vaimoso, and colliding with another vehicle at 12:45pm this afternoon (Saturday) during the peak of traffic.