Dr. Michaelangelo Leota with his parents, Imelda and Leilua Leota and his grandmother Temukisa Faatiga (Photo: Vaitogi A. Matafeo)

After a long journey of study, a young doctor has continued a tradition of having a doctor within his family after graduating with a degree in medicine.  Dr. Michaelangelo Leota is the third out of four children of Imelda and Leilua Leota.

The 27-year-old from Moto’otua graduated with a degree of Medicine from the National University of Samoa (N.U.S.). 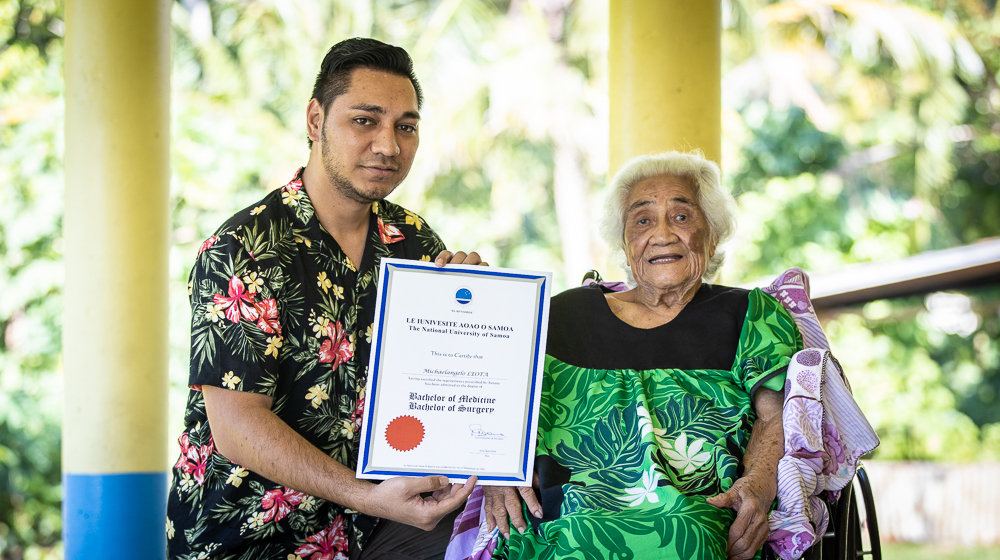 Due to state of emergency orders prohibiting the large gatherings, Dr. Leota was part of an online graduation held last week Thursday.

But when the graduation was conducted online, he was working at the Moto’otua Hospital.

After seven years of studies, the young doctor feels relieved and that all the hard work was well worth it in the end.

“When I was at N.U.S. when we finished Foundation studies, they offered a local scholarship but the only subjects offered were environmental science and other subjects I wasn’t interested in,” he said.

He then sought advice from his father who encouraged him to take up a career in the medical fraternity.

His passion of wanting to become a doctor stemmed from a desire to continue a tradition of having doctors in the family.

“I had a talk with my father and he said there was a new school just up the road for medicine. I also thought it was a good idea as well because my grandfather was one of the first doctors in Samoa, the late Dr. Leota Tautasi Faatiga and no one else took up the role so it was encouraging,” he said.

He acknowledged his family, especially his parents, for supporting him over the past seven years including his siblings overseas.

“And not forgetting my colleagues; we started our academic journey together,” he said.

“And also my grandmother, Temukisa Faatiga was a Registered Nurse. For me it is not a job, it is a way of life and you have to have a certain mindset to go through becoming a doctor.

“A challenge for me during my years of studies was time management, trying to balance out your time because with studies you commit everything you have but if you do that means you are sacrificing the time to spend with family and friends.”

Dr. Leota has spent more than a month working at the maternity ward within the National hospital.

“There is still a big shortage of doctors we are trying to fill in and the workload is just crazy, hopefully in the next few years we would work in comfortable hours,” he said.

“I know we get complaints every day and I have had a lot of patients who were really rude to me even after such a long shift, but we try and keep composure and have patience.”

He said that the health professionals commit to long working hours.

“For me the minimum would be nine hours but the longest shift I have had is 18 hours, then come home, get three hours sleep and go back the next day.”

“Our people need to be more understanding so we can work together because we are trying our best with what we have.”

His father, Leilua, spoke of how proud he was of his son’s achievements.

“My generation skipped having a doctor but thanks to my son he has continued this family tradition,” he said.

“As children of medical and health workers we have seen from all these years that a career in the health profession consists of long hours almost 24/7, of hard work and endless commitment and dedication.

“It strongly helped also that our parents had unwavering faith in God to help them in their work.”

He said that his late father was himself amongst the 1943 group of four Samoan graduates from Central Medical School now renamed Fiji School of Medicine, which included Iakopo Esera, Lene Pilitati and Maka Sapolu.